Miniatures month continues and this week and I'm talking about My Little Pony.

I wasn't intending to talk about My Little Pony, but my daughter (who is right in the target demographic) picked out My Little Pony: My Busy Books with a gift card from grandma when we were at Barnes & Noble the other day. It just so happens that it is a perfect fit for an MLP-based RPG. 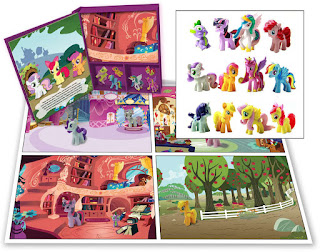 Why is it so good for RPGs? Because along with the book, comes a  four scene play mat with 12 pony figurines. Not only that. but the figures are in roughly the same scale as 28 -30 mm D&D-size miniatures... all that for only ten bucks!

The play mats are a nice background to set the scene for your little role-player, but it appears the figures alone may only cost FIVE BUCKS! While I can't 100% confirm, it appears the set of 12 My Little Pony miniatures on Amazon is the same set of figures that comes with the book for half the price. UPDATE: Don't bother ordering these from a Chinese seller for $5. They are mostly scams and the package will never arrive. Stick with a Prime seller.

READ MORE »
Posted by Raging Owlbear at 6:00 AM No comments: 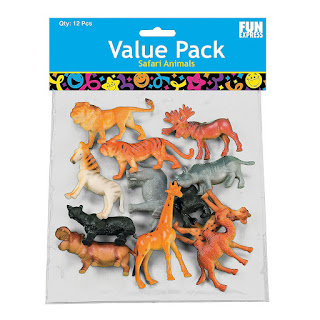 While browsing for something unrelated on Amazon, I came across these little pretties - the 12 Piece Safari Animals for $6.49 (with free Prime shipping). After perusing some of the reviews and comments, these appeared to be the perfect size for tabletop RPGs, and they do not disappoint (mostly)!

(April must be miniatures month because yet another post about our little plastic friends is coming soon).

OK, so some of the scale on some of these furries is a little wonky, but overall, the group is still quite useful.

READ MORE »
Posted by Raging Owlbear at 4:57 PM No comments:

The Pathfinder Battles miniatures line from WizKids has been around for a couple years now. Since the release of D&D 5th edition, WizKids has also picked up the license for D&D Icons of the Realms miniatures

For the most part, the WizKids lines were not that interesting to me. While there were occasional sculpts I liked, I mostly skipped out on anything from WizKids due to the plethora of other owned miniatures. I own a great deal of the old miniatures from the D&D Miniatures games, a set of the Reaper Bones and a bunch of lead from the 80's and 90's as well.

However, several of the new minis from the Rusty Dragon Inn caught my eye. This is not so much a full review the entire set as it is a few quick observations about the recent release.

READ MORE »
Posted by Raging Owlbear at 12:07 AM No comments:

No, You Are Not Being Accused Of Terrorism

OK, so I wasn't originally going to step into this bear trap, but here's the thing about the so-called "white male terrorism"... 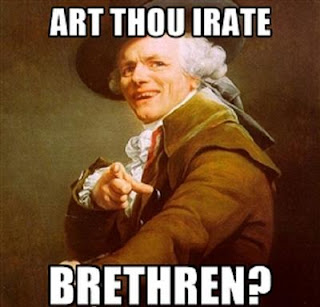 No one is accusing all white males of being a part of sexual harassment problems just because they are white males. To make that claim is purposefully missing the entire point of all the recent conversations in gaming circles on social media.

Let's make a comparison to an actual situation related to terrorism.

In the last few years, the FBI along with local law enforcement is talking to leaders in the U.S. Muslim communities. Not to accuse them of terrorism, or blame terrorism on Islam, but to say "Hey. We all know there is a problem with radicalism. What can we do to help? How can we work together to prevent radicalism from occurring in the Muslim community? How do we make young men and women aware that turning to radical Islam is the wrong path?"

Now, there is sexual harassment in the gaming community. This isn't just an anecdote. This is something that many different women (not just the one who posted the controversial missive) have reported in many different instances. These women are asking for help. They are not accusing all white males of being harassers or rapists. They are asking for men to watch out for these occurrences and HELP.

Tell the person to stop being an asshole. Report harassers to game convention staff so they may be tossed out. Try to prevent sexual assault from happening in our gaming spaces. Kick people off forums for making threats of death, or rape, or similarly nasty inappropriate behavior.

Yes, it's not just a gaming issue... It's a societal issue... and yes, having it pointed out in stark, disturbing words may make some people uncomfortable or even mad, but claiming that it does not happen is bullshit. Claiming it is overstated is bullshit.

FACT: Women get harassed (and sometimes worse) in gaming situations.

You  might say, "But she said all these other things and you should not believe because... blah blah blah..."

I don't give a $h!t about who said what on which forum.

It doesn't freaking matter. Women are being harassed and you are being asked to keep an eye out for those incidents and help put a stop to them. Is that so hard?

So why get all pissed off because some women are saying "Hey, we've had enough of being groped or made to feel threatened at gaming events because of our gender... So how about a little help, guys?"

The question for you to ponder is -- will you actually be mindful of these incidents and help make the community better? Or are you going to keep frothing at the mouth because you are butthurt? **


UPDATE: A lot of people seem to still be getting their underpants in a twist about the phrase "white male terrorism" and are generating a false sense of outrage over a label that may be slightly hyperbolic.

To summarize my points above for those of you still "outraged":

1) The "white male terrorism" phrase that everyone is getting their pants in a twist about is a bullshit red herring.
2) The fact of the matter is that women are being sexually harassed in the community and in many instances, if they bring it up, it only creates more abuse for them.
3) That is not acceptable... So whether you are pissed about the phrase or not, get the @#$% over it and instead spend your energies making the community better.﻿

If you, as a white male, are pissed because the author was using harsh words, you need to turn your offended-by-things meter way down. You are a member of the most empowered race and gender the world over and you're getting pissy over a few words.

Let me repeat: One in five women get sexually assaulted in their lifetime  (look it up) and you are whining because you think you were called a bad name (when you actually weren't). Get some perspective.


Posted by Raging Owlbear at 5:09 PM No comments: