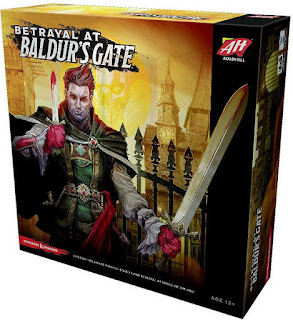 With Betrayal at Baldur's Gate, Avalon Hill has expanded the array D&D themed board games published this year. When placed alongside Assault of the Giants (review pending), Dragonfire, and the Tomb of Annihilation board games (as well as prior year offerings such as Tyrants of the Underdark), there is quite a variety of play style offerings in 2017 for D&D board game enthusiasts. If you are already familiar with Betrayal at the House on the Hill, Betrayal at Baldur's Gate will be super easy to pick up.

Like its predecessor, the players move around revealing the board one tile at a time while encountering Events, gaining Items, and discovering Omens. Eventually, the Haunt is revealed which determines the win conditions for the traitor (usually one player) and the heroes (everyone else).

Full disclosure: I have only had the chance to play a couple of haunt scenarios in the new Betrayal at Baldur's Gate, so you might want to keep that in mind when you consider my evaluation.


First, I'll start with what I really enjoy about the game.

The new characters all have a special power, like a spell, or ranged attack, or re-roll mechanic for example. This gives each character a bit more flavor and adds to the already high replay factor.

The D&D theme is well done in terms of the scenarios, events, flavor text, etc. I wasn't sure a thematic mashup of Betrayal and D&D would work, but so far, so good. Also, there are quite a few D&D in-jokes and Easter Eggs sprinkled throughout the game tiles and text for those with an eye for detail. 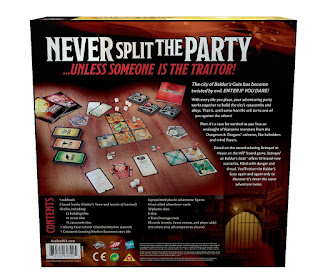 The new haunt roll mechanic also ensures that the haunt cannot happen prior to the 3rd Omen card. Unfortunately, you can't read through the haunts without spoiling them, so I don't have enough data to know how well they fit the theme. However, in one play test, the haunt involved all players versus the game. There was no traitor, and working together to beat the boss monster gave a familiar D&D feel.

I do like the way the buildings and streets combine to make a large "ground level" map, with a smaller catacombs level. I also like that each level has its own draw pile. In the original, a critical room can often be accidentally "buried" at the bottom of the draw pile because of the way the draw mechanic works. This does not occur in the new version.

The sex pre-painted miniatures are also pretty nice and, as a bonus, are sized appropriately for D&D table top.


That said, one of my biggest complaints with the various Betrayal games (the original, Widow's Walk, and now this one) is that the scenarios do not appear to be play tested very well, or well edited in some cases.

How do I know?

We almost always have questions about the traitor powers or actions within the haunt. And I'm not just talking about minor questions, but almost always key issues with the way the powers are worded that make the haunt rules overly ambiguous.

My wife and I are veteran gamers. We have played the different Betrayal games as well as other traitor-mechanic games like Shadows over Camelot, Battlestar Galactica, Dead of Winter, etc... The design challenge with the Betrayal games over other traitor mechanic games is that every scenario has slightly different rules for the traitor and heroes. Because of this, the game designers need to be extraordinarily detail-oriented when writing up the haunt rules. 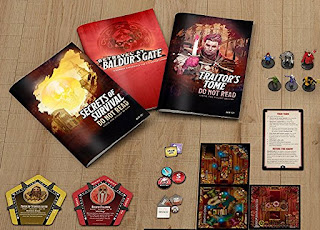 Due to the age of the original Betrayal game, haunt clarifications can sometimes be found online, but not so for Widow's Walk or Baldur's Gate, so you are on your own to interpret the rules as written.

For the hero group, the players can generally come to a consensus after discussion if there are any doubts. However, the traitor is usually on their own to interpret any potential rule problems or vague wording, unless they want to give away their secret powers or victory conditions.

I have yet to play a haunt that hasn't had an issue where the text was not entirely clear and required some varying amount of interpretation. In almost every case, a single sentence (or two at most) would have cleared up the confusion. A good editor should have caught these ambiguities, but I have the distinct impression the the designers did their own editing... or if there was an editor, the editor was only looking for grammatical issues, and not rules ambiguity. A play test of each haunt should haven eliminated most of these problems.

All boards games have some amount of rules vagueness that often need a forum, faq or site like Board Game Geek to help, but it is more pronounced in the Betrayal games simply because there are some 30 to 40 different haunts that all may have different issues, and you are not able to read the haunt rules in advance without spoiling the game.

This has been a big problem for me in that any win or loss is tainted by the "Hey, did we play that part correctly?" discussion after the game. It often takes away some of the shine of a win, or adds to the frustration of a loss. I don't mind losing. Losing a competitive game can be lots of fun. But I hate losing when it later becomes clear that an incorrectly interpreted rule may have changed the whole scenario or player strategy.

As a non-spoiler example, one of the haunts had a big monster with some smaller minions. The minions came out first, and the big boss a couple turns later. In the haunt, it appears to state that the minions go away once the boss monster comes out, but a sentence or two later, it implies the exact opposite. Within the same haunt, the text appeared to imply that the boss monster may be able to attack more than one character given certain conditions, but it didn't explicitly state it. As a group, we ruled that the minions stayed and continued to attack, but the boss monster did not attack more than once. That seemed to be the most balanced interpretation, and we won the scenario... but we may not have won if the boss monster were allowed a second attack, so the victory felt diminished given that we still don't know what the correct ruling is. Since that we had not just one, but two rules clarifications required for the haunt, I was a bit disappointed in that particular scenario, and that has tainted my view of the game for the moment.


Don't get me wrong. I don't dislike the game. If you are a fan of the other Betrayal titles and you like D&D, you will almost certainly enjoy this mash up. However, my recent experiences with poorly worded haunts in the various Betrayal incarnations has tarnished what would otherwise be a really fun experience. It may be that I'm pre-judging Baldur's Gate too hard based upon the play experience with the other Betrayal titles. But it does not bode well that one of the first haunts I encountered had the same problem.

I would give it 3.5 stars of 5. It's a strong Buy recommendation for fans of the Betrayal line, but if you are also annoyed by rule ambiguities of the haunts in the other titles, you will likely find the same issues in this one. The great news is that there are plenty of D&D themed board games to choose from if this one is not your cup of tea.
Posted by Raging Owlbear at 1:14 PM No comments: