This past week I was delighted to welcome Frank Mentzer as a guest in my first video chat. I hope to do more of these with other industry folks in the future, but that's for another day. Forgive my rough style, as I don't usually do interviews, but this opportunity was one I just could not let pass by.


In the chat, we talk extensively about Worlds of Empyrea, his new game setting coming to Kickstarter on October 2nd, as well as anecdotes about his life before, during and after TSR Inc in the early 1980's.

Full disclosure: I did not ask for, nor was I offered, any compensation for this interview. It was my absolute pleasure to talk with Frank as a fellow gamer and fan, and I would be pleased to chat with him again at a future date. I hope I don't come off as too fan-boyish, but I found him to be extraordinarily open and friendly.


A couple weeks ago, Frank's website leaked several names on the Worlds of Empyrea project which are mostly unconfirmed (as of this writing) such as Janelle Jaquays, Clyde Caldwell, Jeff Dee, David "Diesel" LaForce, Larry Elmore, and Erol Otus.

52:00 Looking to release Empyrea box set for Gen Con 2018 and more details about the box content.

Frank also dropped two exciting names off the record which I cannot reveal, but suffice it to say, D&D fans will be thrilled what these folks will bring to the realm.

Video Index:
00:00 Introduction
00:50 Empyrea - TSR/RPGA origins
03:16 Contrasts between Gary's Greyhawk game and Frank's Empyrea campaign in the 80's
05:48 Distinction between I12 intellectual property and Frank's new setting
07:52 Reminiscing about early internet chat room play
09:18 How is the content for Worlds of Empyrea being developed?
10:11 Eldritch Enterprises side bar
11:25 Talking about the setting format for Worlds of Empyrea
13:25 Intent to releaseWorlds of Empyrea for multiple game systems -- RuneQuest, Savage Worlds, D&D 5e, AD&D, BECMI, Dungeon Crawl Classics, and Swords &Wizardry...
15:10 Darlene as the Art Director and doing the large maps, and other well known TSR names adding art and other content. Roughly 35 contributors developing content of some variety.
17:57 Community crowd sourcing setting content as a future project
19:53 Future project to develop a global non-profit gaming database allowing gamers to connect, game together and share community ideas/content.
22:30 RPG Creators Relief Fund - http://www.rcrfcharity.org/
23:04 Darlene and Alyssa Faden contributing to cartography and game maps... Hints at an "Anna" which very well could be Anna B Meyer (unconfirmed).
25:14 Box set content: Maps and perfect bound books, full color bleed. Aiming for top quality contents and product design like you would find from one of the larger game companies. Jeff Easley planned to design box cover. Liz Danforth (Tunnels & Trolls) invited to contribute production efforts or artwork? [unclear]. Character folios reminiscent of OD&D brown books.
29:52 Discussions with Chaosium on a RuneQuest-specific version of the Empyrea box set
31:04 Talking about the history of TSR and breaking into a job during the early days
34:04 Getting the Basic / Expert set project
36:45 Legacy and importance of the RPG design community
41:40 Development of Basic and Export into BECMI
46:20 Life after TSR
48:33 Coming back into game publishing
52:00 Empyrea Kickstarter details
54:07 Genre variants for Empyrea to match the theme of the different game systems, including sci-fiction or space opera.
58:00 Frank's play style

Posted by Raging Owlbear at 10:43 PM No comments:

You may have read in an earlier post that I funneled some funds that might have been spent on other terrain into a new 3D printer. It was a bit daunting, because there seemed to be a lot to learn just to get started, but I found an excellent entry-level printer, the Monoprice Select Mini V2, for around $250 (including the first spool of filament). [PS - Don't buy one off Amazon, they still only have V1's. Go direct to the Monoprice web site].


First, I must say the MP Mini is an amazing entry level 3D printer. The build area is a 120 mm cube, or just shy of 5 inches along the X, Y and Z axis. Note, this does mean some models may be a bit large to print without breaking them into pieces, but printers with a 6’ x 6’ build area are more than I was prepared to spend and I was ok with compromise on this one point. If you do have a little more to spend, consider one with a slightly larger build area.

The Mini V2 comes pre-configured out of the box. Sometimes a little plate-leveling is required, but there are a few YouTube videos to assist the learning curve on this. I had a small struggle getting it just right, but all in all, it wasn’t a major issue and the Facebook communities were a huge help. I selected PLA filament, which is better than ABS for my purposes (and no poison fumes), and I was off to the races!

READ MORE »
Posted by Raging Owlbear at 5:00 PM No comments: 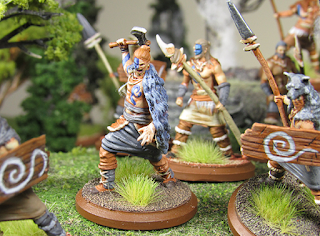 There’s a new Kickstarter on the block!  (Well, that’s pretty much true every week… but this one piques my interest)

UPDATE 09/15/17: Unfortunately, Chronicles looked like it was not going to fund, so the designers have decided to cancel and review how they might revamp the product. I wish them the best of luck!

I was lucky enough to meet the guys from Happy Gorilla at 1D4 Con in West Virginia, and I got to try Chronicles out in a demo skirmish. Chronicles: The Game takes the traditional war game niche (like 40K, Warmachine, Hordes, Malifaux, etc) and aims to make the genre more accessible to the board gaming fans (Blood Rage, Conan, Rising Sun, etc).

Full disclosure: I am not a war gamer. I enjoy the occasional casual game of X-Wing and Imperial Assault, but I don’t play heavy miniature war games like 40K, Hordes, Warmachine or their like. Also, while I have met Happy Gorilla guys at a con, I have no other ties, personal or business, with them.

READ MORE »
Posted by Raging Owlbear at 3:32 PM No comments: