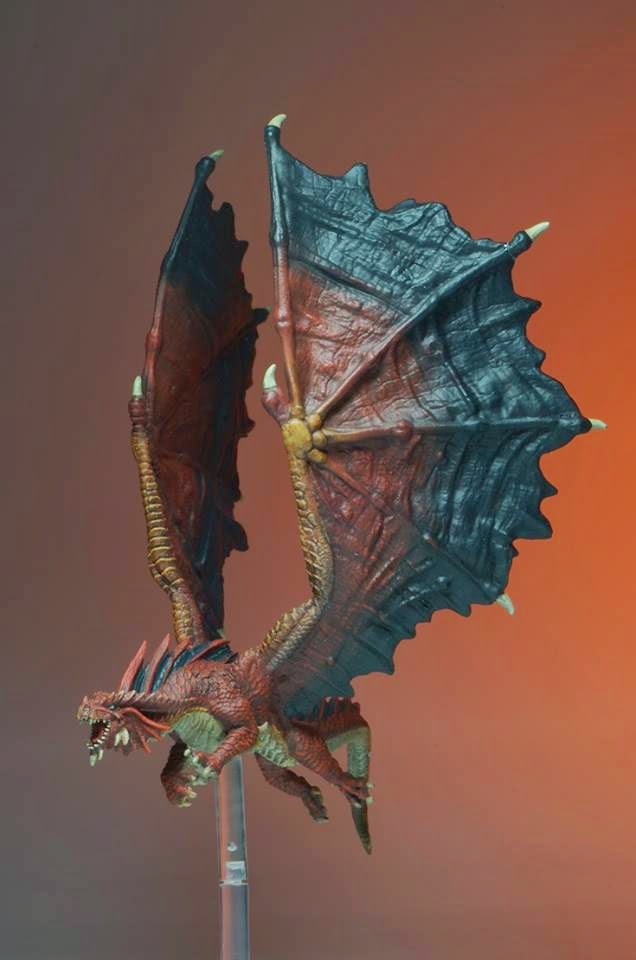 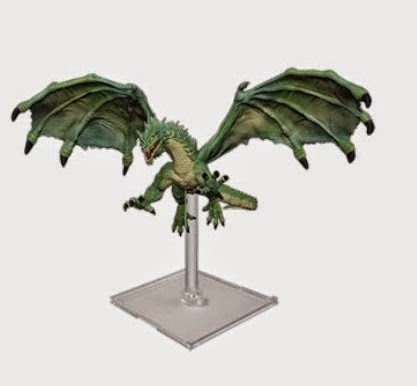 It's nice to finally be able to just walk into a store and buy a pre-painted dragon miniature. They're a little pricey, but not more than the secondary market for the collectible ones.
Posted by Raging Owlbear at 2:27 PM No comments:

D&D Digital: It's time for a simple license.

So Dungeonscape is out of the picture... What now?

It's time for Wizards of the Coast to create an relatively simple digital license for online tools, or alternatively, make an arrangement to sell the data files themselves.


Whether is it spells, monsters, PC skills, feats or abilities, etc, all of these things are basically snippets of formatted text. Tools like Fantasy Grounds, Hero Lab, etc, would be able to import text files containing this content from the Player's Handbook (or Basic D&D). Those tools already do this for other RPG rule sets (like d20, Pathfinder, Savage Worlds, etc).

Fantasy Grounds is also already doing this with 5e. It allows the user to import the Basic PDF and it attempts to parse spells and other information out of the file. It appears to be a pretty clever hack to find the blocks of content using markers (such as formatting cues) from the PDF file itself.

Wizards of the Coast could very easily provide formatted text files for either these software providers to resell for their tools, or sell the files themselves.


Why doesn't Wizards of the Coast do this?

It entirely unknown except that they have some kind of aversion to offering their products in any form that can be easily copied. However, this issue no longer applies with Basic D&D. The data is already out there and companies like Fantasy Grounds are going to allow thier customers to take advantage of Fair Use in order to get that data into their software. This means that Wizards of the Coast is already losing out on a potential revenue stream when they could be selling the D&D Basic digital content to these tool providers (or their customers), if not the full Player's Handbook.

Posted by Raging Owlbear at 11:07 AM No comments:

Wizards of the Coast fumbles the digital ball. Again.

Wizards of the Coast cancelled the Dungeonscape (Codename: Morningstar) project with the same lack of fanfare with which they announced it.

The announcement came in their news section in an extraordinarily brief press release:


"Wizards of the Coast has ended its relationship with Trapdoor Technologies and their DungeonScape application. If you participated in the beta and have questions regarding the application itself, please contact Trapdoor directly.

It’s never easy to end a relationship with one of our business partners, but we remain committed to creating great tabletop and digital gaming experiences for Dungeons & Dragons players and DMs around the world."

READ MORE »
Posted by Raging Owlbear at 3:58 PM No comments:

It's time for Wizards of the Coast to get into the Print On Demand business... or rather, partner with a company that offers it.

Why? Because it's really apparent that people are looking for low-cost ways to print D&D Basic (as evidenced by lots of pics and posts around the net) and Wizards is missing out on valuable revenue because of it.

READ MORE »
Posted by Raging Owlbear at 11:38 AM No comments:

Disclaimer: This is not a "bash the OSR" article, but a truly curious query about OSR systems.

I was having a Blogger / G+ conversation a few weeks back with some people about the OSR and the tangent of "innovation" in RPGs came up. This lead me to think:

I ask this because in the recent articles around the net attempting to define the OSR, a few common themes came out.

** Some call this "rules light", but I believe this is an over simplification since many OSR rule sets attempt to clone the complex systems that existed in AD&D (while still attempting to clean them up a bit). I'd call this "rules clarity" rather than rules light.

READ MORE »
Posted by Raging Owlbear at 10:59 AM No comments:

These commenters miss some of the more import points of my previous article: If the adventure module does nothing to help the DM to run the encounter better, it has failed as a module and should not have been approved for organized play by Wizards of the Coast without additional editing.

READ MORE »
Posted by Raging Owlbear at 1:18 PM No comments:

Is bad D&D better than no D&D at all?

So my recent article on D&D Encounters led me to have a G+ conversation with a peer about D&D. There's a joking expression that says there's no such thing as bad sex... That even bad sex is preferable to no sex.

Does this apply to D&D?

This is almost, but not quite, a rhetorical question. In some ways, it may be acceptable for some people to play even in a game that they are not enjoying that much at times, because something is better than nothing.

I used to think that way when I was young and had ample free time, but these days, my time is very constrained and a bad game can leave me feeling like I wasted several hours when I could have been doing something else productive or more entertaining.

In general, I'd rather play D&D than many other forms of entertainment, but life seems too short for bad gaming.


Posted by Raging Owlbear at 3:26 PM No comments: