A quick word on Maps

The original Greyhawk sets came with some amazing poster maps from artist Darlene. Much later, while Dungeon Magazine was under the purview of Paizo Publishing, a 4-part poster map of the World of Greyhawk was also printed. While it also has beautiful cartography and is a pretty amazing map, to me it feels a little bit sterile somehow for my tastes. YMMV. In any event, the original Darlene maps are still available for under $50 on the secondary market... The Paizo maps are available for about $15 shipped. But probably not for much longer. 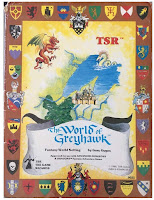 
World of Greyhawk folio - At only $5 for the PDF, the original AD&D folder style folio with the maps and a 32 page "Gazetteer" is one of the cheapest resource on the list. It includes a brief 4-page description of the history of the realm, and with calendars, climate, and population migration notes. The next 11 pages describe the political geography of roughly 50 different kingdoms, baronies, duchies, city states and other governmental bodies. 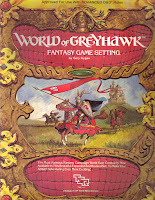 Each entry is roughly a paragraph describing the population and its leader(s). The next 8 pages detail the major geographic features and terrain. The last few pages include some notes on nobility, knightly orders, and bits of a runic language. The descriptions are somewhat short and artwork is sparse, but this is an inexpensive high-level overview of Oerth.

World of Greyhawk Fantasy Game Setting -  Consisting of two books, A Guide to the World of Greyhawk and the Glossography, this box set from the early 80's contains all the information from the original Greyhawk Gazatteer and much more. Geography, political systems, nobles, an extensive section on climate and weather, an expansive list of deities and demi-gods, adventure hooks, encounter tables for different terrain...

Even as an AD&D "1st edition" supplement, three is plenty of material here to adapt for a 5th Edition game, and the PDFs are priced at a very reasonable $6 (normally $10). Given that this is one of the best deals, this may be the supplements you start with if on a tight budget.

Greyhawk Adventures - This is actually not that great of a resource for a 5th Edition game. It does have some setting fluff such as 13 pages of unique geographic features like the Geysers of Death and Burning Cliffs and a "Hall of Heroes" (roster of major NPCs) covering 15 pages, notes and stats on 12 major deities, and six 2-page adventure scenarios. The rest are monsters, spells and magic items statted for AD&D. While it is currently on sale for $6, as a 5th Edtion DM, you could pass this up and not really miss much.

Greyhawk: The Adventure Begins - This supplement is focused tightly on the City of Greyhawk and its immediate environs. It also contain some broader information on the lands of central Flanesse -- essentially everything south of the Nyr Dyv to the Woolly Bay. 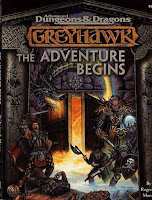 It contains a very detailed history of the area and a detailed map of the City of Greyhawk and various locations within. It is fairly light on mechanics, meaning that most of the content is usable for other D&D editions. It does have a really annoying two column layout with very small text that makes easy reading a challenge. At $6, this is another great deal for a DM wishing to run a campaign in and around the City of Greyhawk.

Greyhawk Player's Guide - Written as a companion piece to The Adventure Begins, the Player's Guide goes over a fair amount of the same history and geography of the City of Greyhawk and its environs. Interestingly enough, there are many additions in this guide that do not appear in the DM's supplement, such as history and current status of the Circle of Eight, knightly orders, adventuring location hooks, and role playing notes for the various humans cultures and ethnicities as well as other humanoids. For the extra $3, this supplement makes a good add-on for The Adventure Begins, but it also suffers from an annoying text layout. 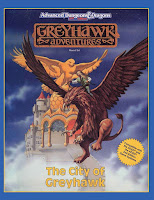 The City of Greyhawk box set - This is the AD&D 2nd Edition update for the City of Greyhawk campaign. In many ways, this is a much more reader-friendly dive into Greyhawk than the prior two supplements. It focuses less on the history of the region, and more on adventuring hooks and opportunities. It even sprinkles mini-adventures right into the descriptive text of various areas. I'm not certain whether I'm more entertained or annoyed but these sudden shifts in direction within the text, but it seems work.

The text takes much deeper dives on the various sections of the city than the prior supplements: the Old City, the River Quarter, the Artisan's Quarter, the Foreign Quarter and the Undercity. There's a lot of great city campaign material inside. The PDF is normally $10 but the PDF + Print on Demand version only costs $22! This is a strong buy and can even be adapted for a more generic city campaign. 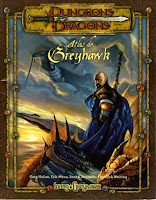 Living Greyhawk Gazetteer - This may as well be called Encyclopedia Greyhawkia. This massive tome of 192 pages has almost everything the original box sets have (and more) updated for 3rd Edition. It is an awesome piece of reference, but not a particularly an entertaining read. The writing is heavy, but it is essential as a reference work. You pretty much have to have it for the $8 sale price!


If you are just starting out with a Greyhawk campaign, your first picks should be the Living Greyhawk Gazetteer and the AD&D 2nd Edition City of Greyhawk box set PDFs. With the DM's Day sale, that's only a $16 bundle (a little more if you pick the print-on-demand).

For a cheap entry-level introduction to the setting, the World of Greyhawk Fantasy Game Setting is only $6 on sale. While the sale lasts, The Adventure Begins and Player's Guide are only another $9 combined. Honestly, with the DM's Day sale, you can pick up almost every title and still spend less than one of the current hardbacks. The original Greyhawk folio and Greyhawk Adventures are probably only necessary if you are a PDF collector and are dying to have a complete set.

Posted by Raging Owlbear at 1:17 PM