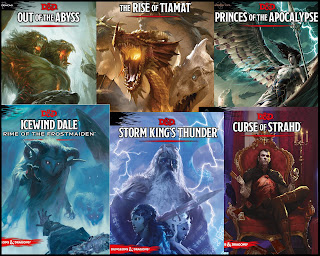 About 6 months ago (already?), I suggested that running one of the long hardback adventures from Wizards of the Coast may not be the best idea for a new Dungeon Master. You can watch the video for all the details, but to summarize:

Instead, I suggested perhaps a more short-form campaign would be a better choice. Prepping smaller 3 to 5 session modules and one-shots (single session length) adventures might be better for the new DM. A shorter length campaign (5 to 7 levels) is also a better introduction to the challenges of game mastering.

There are a few exception. If you are a new DM and you haven't run the D&D Essentials Kit or the Starter Set adventures, those are both amazing introductory (and relatively short) adventures. The Dragon of Icespire Peak (Essentials Kit) is a little more modular and has more bite-sized chunks for the newer DM, but the Lost Mine of Phandelver (Starter Set) is also a very well done scenario with a plot arc the underlies all the encounters. Together, they can be used to introduce a new group of players to the Sword Coast (Forgotten Realms). Tales from the Yawning Portal, Ghosts of Saltmarsh, and Candlekeep Mysteries also contain shorter length adventures that are self-contained.

But, that's not what I'm here to talk about.

Short Campaigns and One Shots

This topic resurfaced because I was asked on social media, "What are some good one-shot or short multi-session adventures that can span a number of levels?"
Boy, howdy... there are lots. I do have some recommendations for publishers I've enjoyed. I've come to prefer the more episodic "monster of the week" style campaign because you're not locked into a really long plot arc that the players may lose interest in over time. Smaller adventures are over in 3 to 5 sessions and if one of them just isn't working out, you can scrub that particular mission without feeling like you lost $50 and tons of prep work. Just move on to the next episode.

For my first recommendation, I wrote out a list of One-Shot Halloween adventures a few years ago. These are great 1 to 2 session length adventures, but they are largely horror themed, so I wanted to include a broader variety of adventure types for this post. 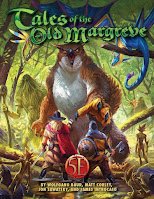 Tales of the Old Margreve

Tales of the Old Margreve is not a full campaign, but more a collection of short adventures centered on a particular region of Kobold Press' Midgard campaign setting. Three of the adventures are directly linked and can be run as a part of a plot arc, but the rest are are just nice little 1 to 3 session vignettes that can be dropped into almost any campaign. Hollow was a nice starter adventure to set the tone. The introductory adventure leans toward the horror theme as well, but most of the book involves forces of the fey as opposed to forces of darkness. 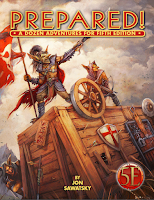 Sticking with Kobold Press for a moment, the Prepared series is a wonderful collection of short adventures intended to be dropped into a campaign with a very small amount of prep work. They're all just a handful of pages, so one could read them on a Friday afternoon in preparation for a Friday night game, and the adventures span from level 1 to 15, so there is almost always something that you can mine for your campaign.

The Quests of Doom series from Frog God Games is written to emulate an "old school" play style found in Advanced Dungeons & Dragons. These adventures are not only available for D&D 5th Edition, but Pathfinder and Swords & Wizardry as well. The writers include notables such as Ed Greenwood, Matt Finch, Skip Williams, and Jim Ward. The Darkening of Namjan Forest is one of my favorites and will cause your players to poop their pants when they encounter shadows everywhere! 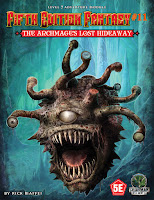 Known for their old school Dungeon Crawl Classics line of adventures and DCC RPG, Goodman Games also produced Fifth Edition Fantasy which is another series of relatively short adventures that can be dropped into any 5th Edition campaign. The adventures can run anywhere from roughly 16 to 24 pages and usually completed in just a few sessions.

Dan Coleman Productions puts out the Dungeons On Demand series. These short adventures can be bought individually or as bundled collections at a discount. Dan uses maps with friendly iconography that allow the DM to easily see where the most important points of interest, clues, encounters and other details are at a glance. These are also collections where you can reasonably read most of the adventures the day of your game and still run them proficiently that night. 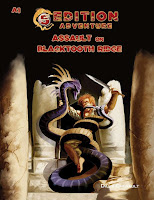 Last but certainly not least is Troll Lord Games 5th Edition Adventures series. The Troll Lords are know for releasing the Castles & Crusades RPG back in 2004, arguably the first "Old School Revival" RPGs. Their 5th Edition line is largely translations of the C&C adventures over the years, but sometimes with additional content that did not appear in the originals. Two of the absolute best campaign starters are A1 Assault on Blacktooth Ridge and A0 The Rising Knight

This list really only scratches the surface of what's out there, and it is likely I will need to create another follow up list highlighting adventures from the DMsGuild.com... but that may have to wait for another day. In the meantime, check out Nothing Unusual Here -- a weird little tale about a village and its unusual fondness for their pet dwarf pigs. I hope this is a good start for those looking for short adventures for their home brew game.
Posted by Raging Owlbear at 5:11 PM No comments:

Car War 6th Edition has largely been the big news in my gaming world lately. In this latest video, I do an overview of the vehicle building cards included in the Double Ace pledge, which includes the Core set, Vehicle Expansion #1 and #3, Armory Pack, Linked Weapons Pack, Dropped Weapons pack and the Crew Pack. The Uncle Albert's expansion is included in the early bird pledges, but hasn't shipped as of this video. Timestamps below.

The Car War Kickstarter has started to fulfill and several of us have gotten our "Double Ace" base pledge (some add-ons may be coming later). This video is basically unboxing the large box... but there was so much to cover, I will need to add separate video to look at all the vehicles included.

Posted by Raging Owlbear at 3:40 PM No comments:

Don't try this at home.
In the interest of science, I am sometimes driven to take incredible risks so that you, the viewer at home, do not have to. In this video, I am trying the Brach's Turkey Dinner and Apple Pie + Coffee Candy Corn. Brach's decided that they would not just meet, but exceed the dreams of Willy Wonka in presenting you, the consumer, with a whole Thanksgiving Dinner in Candy Corn format.
The results are understandably surprising. Timestamps follow below.
For specific flavors, jump to:
09:00  Green Bean
11:00  Cranberry Sauce
14:25  Stuffing  (dark brown color)
16:00  Apple Pie and Coffee (light brown)
18:40  Turkey (medium yellowish brown)
Some of the flavor differences were a bit subtle... but not all. I don't want to spoil the video, but if you want to jump to the most surprising, 18:40 may sum up my experience with this particular bag.
Posted by Raging Owlbear at 12:17 AM No comments:

In a few more words, "It's complicated... but perhaps not that complicated." The thing is, don't worry. Your investment in D&D 5th Edition won't become obsolete.

First, let me take a moment to reflect. In 2024, Dungeons & Dragons will be 50 years old. This is a fairly mind-blowing anniversary. A vast majority of the player base these days is younger than the game itself. The legacy D&D has left on pop culture, video games, and tabletop gaming is practically immeasurable because it has literally influenced so many corners of the entertainment industry as a whole.

The very first Dungeons & Dragons box set shipped in late January of 1974... and it's been a wild ride since then.

During D&D Celebration, Wizards of the Coast announced they would be releasing revised core rule books in 2024. The revised books will update the character creation rules slightly to match what been published in Tasha's as well as include content from the books note above. Ancestries will replace Race... but they are still basically the same mechanically. Non-humans get some combination of +2/+1 in ability scores with their other special abilities and humans will use something akin to the Variant Human option. Ability bonuses will likely follow class or background rather than race selections.

Aside from character generation, all errata will be included and likely a number of spells will be altered or clarified. It is probable that some class paths will be tweaked, but I don't expect anything too stunningly different from class paths we've already seen in Xanathar's and Tasha's. We do know for certain that creature stat blocks are changing and we're seeing the first steps of that in Wild Beyond the Witchlight.

I've seen a lot of people refer to the upcoming updates as "5.5" which is a reference to when Wizards of the Coast revised 3rd Edition and printed the D&D 3.5 Core rule books. It's hard to gauge the accuracy of that take. The 3.5 rules did some fairly significant changes to combat, and moved the game much more toward an on-the-grid tactical combat (To be fair, third edition had started that trend, but 3.5 really cemented grid play as defacto standatd).

I'd hesitate to say we'd see sweeping changes. Calling it "5.25" might be more accurate, or perhaps just "5th Edition Revised" is more than sufficient. We've seem this before with AD&D. Second edition had new black cover revised books come out several years after 2e's introduction. It didn't really change the game much, but did offer some class changes in the form of "kits" and other skill option (which laid some of the foundation for 3rd Edition).

But the point it, Don't Panic. It's still D&D 5th Edition.

Posted by Raging Owlbear at 4:27 PM No comments: