D&D: 99 Problems and Liches Ain't One

[So all this talk about Tomb of Horrors got me thinking...] 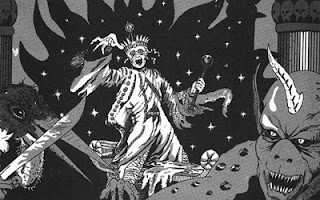 RO: Whatever, Felicia. Anyway, what kind of imbecile would ever want to become a Lich?

Acererak: I will smite you to ash for your insolence.

RO: Lich, please. I'm the DM and can wipe your ass out of existence with a Sharpie. So now that we have that settled, you need to answer a few questions.

RO: In the Monster Manual it reads that Liches are powerful wizards that wish to avoid death... So they ritually kill themselves to become undead. WTF?

AC: You know, immortality and all...

RO: You have access to freakin' 9th level spells and that's the best you can come up with? And you have to pledge servitude to some other planar power in order to become undead. F@ck that noise.

Haven't you bitches heard of Clone? It's only 8th level and you come back as a younger version of yourself with all your memories and skills. Seriously. Look it up.

Now don't you feel like a jackass for becoming an undead indentured servant?

RO: Whatever. That's not the point. You're a freakin' master wizard. You have access to 9th level spells. Wishes... Potions of Longevity...  Hell, you could do some damn homework and make up your own spells such as a better version of Clone (which if you had just waited 40 years, would have come along anyway).

And what do you do all day? Wander around your f@cking tomb resetting all the traps every few days? You have to push that f@cking 5-ton elephant roller back into place every couple weeks when you could be rollin' down the street, smokin indo and sippin' on gin and juice with your homeys. You could be back at the tavern right now with your big ass wallet, buying rounds, and hittin' on the ladies.

AC: Now you're just being mean.

RO: I mean, you basically have the universe at your somatic fingertips and the best idea you had for immortality is to kill yourself. So now you just hang out in a damn tomb waiting for idiot adventurers. What kind of unlife is that? Are you some kind of nut bag shut-in? What a freakin' waste.

RO: Change that stupid name, Felicia. And talk to Vecna about leaving his body parts all over the place. Seriously. What's up with that?

Posted by Raging Owlbear at 2:12 PM No comments:

D&D: Is Tomb of Horrors actually the worst adventure of all time?

TLDR Summary: If you are not familiar with the history of Tomb of Horrors, or your players don't fully understand the stakes, just don't run it. PCs will die. If your players aren't expecting an abattoir dungeon, it will ruin your campaign.

So John Wick appears to have caused a bit of a kerfuffle on social media by posting that Tomb of Horrors is the "Worst Adventure of All Times".

A lot of people who love classic D&D (and anything Gygaxian) came out to defend ToH and in some cases attack John Wick.

I don't really have a dog in this fight... but I did want to say something about why Tomb of Horrors could be the worst thing you ever do to your players.

READ MORE »
Posted by Raging Owlbear at 3:34 PM No comments:

So this is my first attempt at the B/X Elf class using the SRD5 as part of my B/X-5 Core Rules effort.
UPDATE: After feedback from the community, I've updated the Elf class from what is below. View my revised version here.

My issue is that 5e gives some mechanical toy for every level. B/X classes, on the other hand, have very little that change from level to level other than to-hit numbers and spells.

To remain compatible with 5e, I'm still giving some bonus or feat-like present to PCs at each level... but it's a challenge simplifying the classes to maintain a more B/X philosophy.

Keeping that in mind, this is the first draft of the B/X Elf class. I'm not completely satisfied, as it still feels "too fiddly" to me. The Elf is based on a Ranger, but will have more Druidic spells, rather than Arcane. When I'm finished it might be more of a mix of Arcane and Divine spells similar in style to a Bard but with a "Nature" flavor.

Anyway, let me know your suggestions as this is an early draft and still wildly in flux. Here is the B/X-5 Elf.

READ MORE »
Posted by Raging Owlbear at 3:18 PM No comments:

I have previously posted about 1st Adventures, an OSR rule set that I've been cobbling together. The recent release of the of the SRD5 has changed the course (slightly) of my intended plans.

1st Adventures has always been intended to be somewhat based on B/X rules, but inspired by other OSR games like Basic Fantasy and Fantastic Heroes & Witchery. My challenge has been trying to find the balance between the bare bones B/X character classes and the more "Christmas ornament" classes in modern D&D which give a new toy every level (or is that more like Chanukah?)

Along those lines, I'm putting together what I call B/X-5 Core Rules a 5th Edition compatible rule set that attempts to streamline [some of] the mechanics and class ornamentation. It will not strictly be a retro-clone of Holmes, Moldvay or Mentzer D&D, but hopefully will channel the spirit of those Basic sets with characters still being playable within D&D 5th Edition. 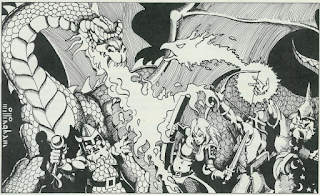 B/X-5 will include the first 12 levels of Cleric, Fighter, Rogue, Wizard, Dwarf, Elf, and Halfling (yes, race as class). Feats will be removed or heavily modified. The skill system will be optional. Healing will be less plentiful and more resource managed. Cantrips will have limited castings. Other deviations from the 5th Edition Basic D&D are still in the works.

1st Adventures will be based on the B/X-5 Core Rules, but with its own built-in setting and modifications to the core races and classes as presented in B/X-5.

With that in mind, read on if you want to see the previews for the Dwarf and Elf class designs or read the full (work in progress) B/X-5 Core Rules here.

Posted by Raging Owlbear at 2:07 PM No comments:


Yeah, that's a terrible play on words, but I couldn't come up with anything better on short notice. It seems when you are not paying much attention, huge news breaks in the D&D world. 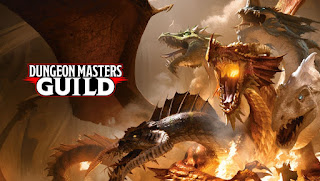 1) Wizards of the Coast released a 5th Edition System Reference Document under the Open Gaming License.

2) WotC also set up the Dungeon Master's Guild through One Book Shelf which allows self-publishers to sell using the power of the D&D brand.

So number 1 is huge. Massively huge.

I mean, one could technically already publish 5th Edition content under the current OGL and existing copyright law (Goodman Games and Troll Lord Games are already doing this), but for those of us who a are laymen when it comes to copyright, the SRD basically tells you exactly what you can and cannot publish related to the D&D rules in your own work. That's a huge boon to those of us who are babes in the woods when it comes to copyright law. Now we can put stuff out there without worrying about C&D letters from Hasbro lawyers.

Even better, it's not just the content from the Basic game. It includes a lot more goodies (most?) from the larger rule set. I haven't had the chance to read through it all. but I'm pretty excited about what this could mean. I had been pretty critical of the lack of SRD in the past.

Number 2 is pretty important too. The cynic in me says it's just a way to get money out of self-publishers that they would not normally get. After all, there is nothing stopping me from putting 5th Edition compatible content on RPGNow without sharing a single dime with Wizards of the Coast (i.e. - Troll Lord and Goodman, as I already noted).

On the other hand, the lure of the additional exposure is a pretty big deal, and I think we may see a lot of smaller publishers biting the revenue share bullet. Additionally, there are certain elements of the Realms lore (and IP) that you are now allowed to use if you sell through  dmsguild.com.

The best best for a self-publisher would probably be to do both. It would take only a modest amount of work to have a DM's Guild version and a RPGNow version (minus the DM Guild branding). That way one version of your adventure could get the extra exposure and the other version would not have to share revenue.

Update: This appears to be against the DMsGuild terms and conditions. If you put something on their site, you can't sell the same content through other venues. There may be some legal wiggle room, especially if you are not using any WotC IP in your work, but they would most likely kick your account of the site, so you'll have to make the hard choice between extra exposure or keeping all your revenue.

So, if you are a self-publisher, what are your plans? Going to sell through the DMsGuild or just RPGNow/DriveThruRPG?  Or both?

If you haven't published anything before, are you now tempted by this new opportunity?

Let me know you guys think of this news in the comments!


Posted by Raging Owlbear at 10:12 AM No comments: 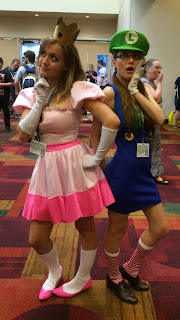 So, I started this post on Gen Con about 4 months ago, but with my interstate move just 2 weeks after Gen Con and various other Real Life insanity, I never really got back to it. No one probably cares by now, but I thought I'd give myself some closure on this post.

However, I do want to talk a bit about my experience there even if it is less than timely. Rather than a full report, I'll just summarize a few highlights.

READ MORE »
Posted by Raging Owlbear at 3:00 PM No comments: