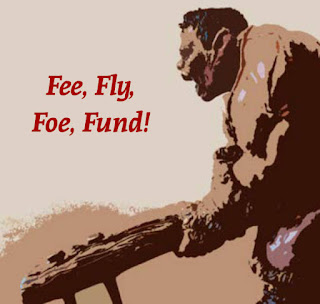 
Fee, Fly, Foe, Fund not only ties together the Nightstone thread with Golden Fields encounters, but was also written by none other than Greg Bilsland (of Wizards of the Coast) for the 2016 Extra Life fundraiser.

Without giving too much away, Fee, Fly, Foe, Fund addresses where the other Hill Giant wives have roamed off while Guh (pronounced "Goo" apparently) rules the roost. It's mostly a combat side-trek, but could be tweaked for diplomacy (the suggested diplomatic approach is nearly impossible).

My only complaint is that the included map is just bad... MS Paint bad. I mean, this PDF was probably just thrown together because fans who may have watched the Extra Life streams asked for it, so I don't expect much, but there are so many ways to make a decent encounter map even without hiring a master cartographer.

The best thing about Fee, Fly, Foe, Fund is that it is Pay What You Want... and 50% of the proceeds goes to Children's Miracle Network.

So throw a couple bucks at it, even if you can just download it for free.
Posted by Raging Owlbear at 1:48 PM No comments: 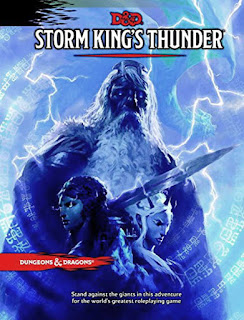 TLDR Summary: Storm King's Thunder has a lot to like within its covers, but also has some glaring adventure design issues that will annoy you and require some extra DM modification.


If you've been living under a rock (or just don't pay attention to social media much), you might not know that Storm King's Thunder is the latest adventure path for Dungeons & Dragons 5th Edition.

In previous adventures, the PCs have had to deal with Dragons, Demons, Drow, Elementals, and Undead. This iteration, it's time for the Giants.

This isn't technically a full review. I've only read through the first few chapters, and this is more of a first impressions post. This is not a "buy or don't buy" review article, but just some [very subjective] observations of mine. I may follow up with a more thorough review once I've read through the whole book and start running it for my group.

READ MORE »
Posted by Raging Owlbear at 1:14 PM No comments: