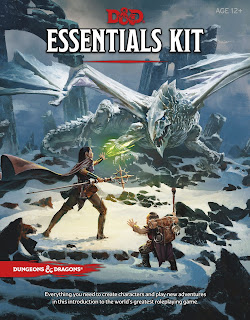 UPDATE: My review of the D&D Essentials Kit is live.

A plethora of product news came out of D&D Live this year, some more or less exciting than others (looking at you, Eberron). However, I think the most exciting in the list is the D&D Essentials Kit.

The D&D Essentials Kit is being published as an "along-side" sister set to the D&D Starter Set. It includes a new adventure (with a dozen or so new side quests) in the Phandalin region of the Sword Coast. It can be played separately or along with Lost Mines of Phandelver.


There are several things to really like about these features. The Essentials rule book includes character generation with the four D&D Basic classes (Cleric, Fighter, Rogue, Wizard) plus the Bard. The rules will also include an edited version of the Sidekick NPC rules from Unearthed Arcana. This will allow a D&D group to consist solely of a single player and DM. The adventure will also support this "lone wolf" play style alongside the more traditional 4 PC party, which is a fantastic idea, because it lowers the barrier of entry to D&D considerably. I have also long argued that an off-the-shelf beginner product should also include character generation rules, even with the existence of the free Basic PDF.

The DM screen is also a welcome addition. I don't personally use a DM screen, but I still love them as art and a reference tool. This DM screen is less thick than the $10 stand-alone screens. It is made of heavy card stock rather than the thicker chipboard found in board games. If you have seen the DM screen included in the 4th Edition DM's Kit, you'll understand the thickness. It is a weakness in terms of long-term durability, but a relatively minor one.

Quest cards, sidekick/NPC cards and Magic Item cards are a great idea for a starting set. I've always liked the Pathfinder Face Cards for NPCs. I've also used my own system for Quest cards, so these are an excellent game aid for new DMs.

The biggest downside is that this set will be a Target exclusive over the summer (until September). This leaves out the Friendly Local Game Stores who have generally gotten releases a couple weeks ahead of large retail. I understand the move from a marketing perspective, but I'm not terribly crazy about it.

As much as the Stranger Things D&D box set was a bit "meh", there is little doubt in my mind that the D&D Essentials Kit will be a home run. My "perfect" starter kit might also include some PC and monster cardboard tokens, but this comes awfully close to a perfect beginner box set. Hopefully, the MSRP won't be too high, but I expect $25 will be the price point.

UPDATE 2: The box set contains a D&D Beyond key to unlock the online contents. It also includes a discount key for the Player's Handbook on D&D Beyond.
Posted by Raging Owlbear at 1:41 PM 9 comments:

A few weeks ago on Twitter, I mentioned some inexpensive terrain options I found on Amazon, specifically some boats and medieval village pieces I thought might go well with Ghosts of Saltmarsh. I ended up purchasing a couple piece and here is my quick review. Below the video are also comparison shots with some Dwarven Forge and papercraft terrain options. You can read my earlier post on paper craft options here. Enjoy!

Posted by Raging Owlbear at 10:46 AM No comments: