Year of the Owlbear

One year ago tomorrow, I published my first real article for Raging Owlbear which began my journey into the blogosphere in earnest.  Over the past year, I gained about 88 thousand page views from 75 posts, just shy of what I hoped would be a 100K freshman year, but still respectable in my mind. I have a few hundred Google+ followers and I've made a name (albeit a small one) for myself in the RPG blogging community. Not too bad for year one.

Blogging over the last 12 months has also improved my creativity. I'm thinking a lot more about game design, DMing, world building, and my writing has improved overall.

On the other hand, I've also had challenges. I've started several creative projects that are sitting at anywhere from 10% to 25% completed and obligated myself to others despite my already limited time to work on my own blog. It seems I want to do a lot more than what I realistically have time for.

For my one year resolution, I plan to get back to several of my half-started endeavors and complete at least half of them (trying to be realistic here).

I stumbled in my development of 1st Adventures when I discovered that many of my ideas had already been done, and done very well, by others. While I knew many of my ideas were probably not revolutionary, the more I dug into other OSR systems, the more I realized I didn't have as much new or different to offer as I initially thought. This was a bit of a blow to my creative juice. I've been thinking of new ways to approach this project to get it off the ground again. 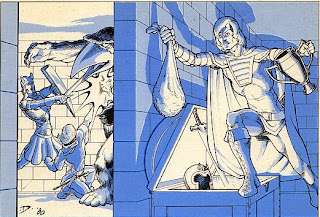 Second, I want to get back to the D&D Primer. I still have some compelling ideas for a "newbie packet" that includes more than just my introductory example and character sheet.

Third, I want to keep the ball rolling on creating 5th Edition conversions of existing modules and I'm hoping to rope in some other popular bloggers to the table, so this becomes more of a community affair.

In addition, I'd like to keep writing about Dangerous Journeys to see what else I can discover about Gygax and his... uhmm... "creative" game design.

Lastly, there are at least 3 or 4 other half-baked ideas that I haven't mentioned on the blog. It'd be a personal feather in my cap if I could get at least one of them launched.

Thanks for reading, and I hope you stick around for another year. I think you'll see some more entertaining, compelling and useful articles coming out of the Owlbear for your gaming edification.

There's been some amount of digital ink spilled about "special snowflake" PCs and how players should not concern themselves with giving themselves a "special" background because their characters become special through play. I'm on board with this idea. Not that a character doesn't need to have background, but that it doesn't have to be "I'm a scion of a lost diety, blad-di-blah"... (But that's not really what this post is about).

However, I recently read a blog post related to world building warning DM's to stay away from this same pitfall when developing their in-game races. (Unfortunately, I don't recall who the author was and can't find the post now).

The gist of it was, "If it walks like an Orc, talks like an Orc, and has a piggy face, call it a damn 'Orc', not a 'Crogosh'..." or something to that effect. At first I found myself nodding to the points. Why make something different in name only for the purpose of wanting your world to feel special or different?

But then I started thinking about the races I wanted in 1st Adventures (an OSR game/setting I am working on). I was working on the ideas for Dwarves and thought of some alternative variants to make them a little less generic.

You see, what I'd like is a more simian Dwarf. What if they had slightly longer arms, prehensile feet and were more like an underground orangutan? And perhaps while they are bi-pedal, the occasionally knuckle walk? What if their underground cities were designed to take advantage of not just walking along the floor, but also brachiating across ceilings and open spaces? What if they didn't just have beards, but were hairy all over like some kind of stout Yeti?


Now... If I just call them "Dwarves" all of that difference gets short-circuited by the meta idea of the players. In their minds, "Dwarves" are back to being stout, Welsh character actors rather than underground simian miners.


At the same time, I may want to keep some of the stereotypical Dwarfish aspects, so perhaps I use a racial name that suggests "Dwarf" but is instead something like "Dvar", or "Dwarren".

Where is the line? How much do you change the race before you rename it? Is it ok to sometimes have a Dwarf not be a "Dwarf" and an Orc to be a "Crogosh"?

Thanks for reading and please share your thoughts in the comments!


Posted by Raging Owlbear at 1:08 PM No comments:

DRAGON+ Issue 1: Exactly what we're not waiting for? 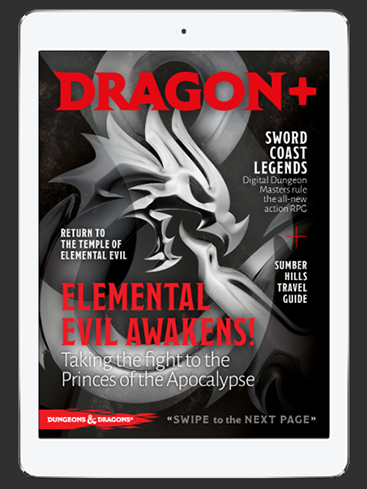 In recent months, I've been pretty vocal in the shortfall of content coming out of Wizards of the Coast. I've been long hoping they would re-invigorate Dragon and/or Dungeon Magazine.

On Friday I heard the wait was over... or was it?

Wizards of the Coast launched their new online platform for Dragon Magazine. The app, which combines social media with a magazine publishing platform is dubbed DRAGON+.

So let's take a look and see what's in store.

READ MORE »
Posted by Raging Owlbear at 2:03 AM No comments: