TLDR Summary: It's a buy, but not necessarily a strong buy if you already own some of these maps. While several of them are only marginally useful, the collection is still a reasonable deal, providing a wide variety of terrain. I would have liked to have seen a few different reprints with more useful terrain, but on the whole, it's a decent deal for the price.

UPDATE: To make these maps even more useful, consider picking up the Tactical Maps: Adventure Atlas which include 88 new encounters written by DM Guild Adepts specifically for use with this product!

D&D Tactical Maps Reincarnated collects 20 different encounter maps together from the last few editions of D&D into a single map collection. The maps are double-sided and printed on folded poster paper (so no dry erase or wet erase surface) with a 1 inch grid for tactical play. The paper is standard poster weight, so it requires gentle handling. You should probably get a thin plastic "plexiglass" insert from a cheap poster frame to lay over top the maps to protect them in use.

Note: I own most of the originals of these maps included in this reprint pack, so my impression of this set is based upon the utility I have gotten out of each map over the last several years. For the few that I do not currently own, I try to evaluate their utility based on the terrain and features. An index of the included maps follows at the end.

Green Valley Pass
This map, originally called the King's Road, was included in the Keep on the Shadowfell and reprinted in Fantastic Locations: Fields of Ruin map pack. This is by far the most useful map in my collection. In terms of utility, I have used this on par with the Paizo Woodland and Forest flip mats. It's a nice generic country side road with different terrain and good cover (damn you, Sharpshooter feat!). Goes well with the D&D Starter Set or really any adventure with an on-the-road encounter... so, basically, all of them.

The most recent revelations further indicate a Greyhawk update may be pending for D&D 5th Edition.

UPDATE 02/27: The latest issue of Dragon+ had an article about playing 5th Edition in the World of Greyhawk!

UPDATE 02/25: From the Wizards.com press release.
"Nestled on the coast of the Azure Sea is Saltmarsh, a sleepy fishing village that sits on the precipice of destruction."

UPDATE 05/08: A Ghosts of Saltmarsh sidebar officially states the location of Saltmarsh in the World of Greyhawk, as well as optional locations for Eberron, Forgotten Realms, and Mystara!

The Azure Sea is in the World of Greyhawk, not the Forgotten Realms. The WotC press release drops a bomb in the first sentence. It looks like my initial impressions have been on the right track.


Last week, there was news that the Stranger Things D&D Starter Set adventure was not set in the Forgotten Realms. This started speculation that Greyhawk setting update may be coming.

This week, Wizards of the Coast (or rather Amazon) announced Ghosts of Saltmarsh, the new adventure campaign that will revamp the original AD&D Saltmarsh adventures (U1 - U3) as well as include several other sea-faring based adventures.This has furthered the speculation around Greyhawk.

This, in itself, does not necessarily confirm Greyhawk as a 5th Edition setting. After all, Tales from the Yawning Portal also included Greyhawk setting-specific adventures such as White Plume Mountain, Against the Giants, and the iconic Tomb of Horrors.

However, the trail of clues continue. A recent segment in the Dragon Talk podcast (02/07/2019) with Mike Mearls talking about his love of the Greyhawk campaign setting and the desire to publish something for the setting. To quote, "I would love to bring Greyhawk back, but I want to bring it back in a way that does justice to it and that makes everyone fall in love with it the way I love it."

In the intro for the episode, the hosts also dropped teasers about all the things they could not talk about that were coming. Could the Greyhawk interview been set up as a secret teaser for upcoming releases?

Am I grasping at straws? Quite possibly...

But there is a strong case to be made that a DMs Guild update on the World of Greyhawk would fit well with recent (and upcoming) releases... and based on #DnD Twitter, people are dying for a Greyhawk supplement akin to the Eberron update for 5th Edition. Financially, it makes a lot of sense. Greyhawk would jump to the top of the DM's Guild best seller list just as the Eberron guide did.


The evidence is starting to mount that something is going on with the Greyhawk setting. Even if you set aside the Stranger Things and Ghosts of Saltmarsh as clues (yes, they both could be "setting neutral"), Wizards of the Coast appears to be doing Greyhawk marketing.


This is marketing, people! It has the hallmarks of an opening salvo. There are at least as many Greyhawk fans as Eberron fans, if not more. What do you think?  Leave a comment and let me know! 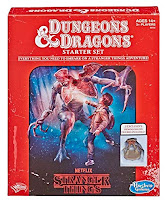 Ok, maybe breaking speculation... However, I asked a few questions of Steven "Stan!" Brown, one of the authors of the new Stranger Things D&D Starter Set.

@RagingOwlbear:
How much can you reveal?
1) New adventure written by you?
2) Still FR backdrop or set in generic fantasy land?
3) Any rewrite/re-presentation of the basic rules from the old starter set?

@stannex:
As always, I mostly can be coy and non-specific. But here goes:
1) I was the primary designer on the adventure;
2) ST [Stranger Things] is set in 1983/84 and the FR [Forgotten Realms] boxed set wasn't published until 1987;
3) The rules book was updated by the D&D design team.

So... #3 was a given since they want to tie in Stranger Things with some look and feel elements, but I think the Forgotten Realms question reveals a lot... Or at least, it notes that Forgotten Realms is specifically not available as a setting for that time period.

@RagingOwlbear
Did I just get a scoop?
#dnd #Greyhawk #IHaveADream

@stannex:
In that no one else has asked me these questions, kinda. But then, I didn't tell you anything that isn't already announced elsewhere ... so kinda not. See? I'm coy like that.

Mike Mearls has specifically mentioned Greyhawk on more than one occasion on his Twitter feed. Even though Stan doesn't specifically confirm Greyhawk, there is a strong implication. Could Greyhawk fans finally get a small taste after all this time? We won't know for sure until May... but to quote another 80's icon, "Signs point to yes".

UPDATE: As noted in my comment, there is minute possibility that it could be Mystara (Grand Duchy of Karameikos is in the original Expert Set).  However, I believe it is likely that the new set may contain Greyhawk references, but without a specifically mapped locations. This, however, leaves the door open for a DM's Guild "Guide to Greyhawk" release similar to what we've seen with Eberron.

You can read the thread here:

Posted by Raging Owlbear at 2:49 AM 4 comments:

State of the Owlbear: 45 years of D&D

The state of the blog is strong!

Happy 45th Birthday to Dungeons & Dragons which was released at the end of January in 1974!

There are too many ways to recount how this game has made a direct and lasting impact on my life. I am forever grateful for Gary Gygax and Dave Arneson as well as all the designers who came after to ensure its legacy.

Unfortunately, Raging Owlbear experienced its own shut down in January. Google did not inform Blogger users that comments were being taken off the blogs as of February until just a few days before the take down. Many of us who thought we had until April to migrate Google+ comments were caught out.

I had already started migrating the comments when the threads were expunged, but I hadn't finished... and it's a laborious process to cut/paste 5 years of blogging which I'm still working on... so that happened...

READ MORE »
Posted by Raging Owlbear at 1:13 PM No comments: