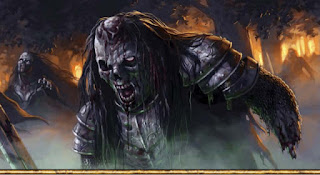 Nothing Unusual Here
The citizens of Mudhole are unusually fond of their miniature pigs, carrying the pigs with them everywhere... all the time. Is it a pet fad or something more sinister? A side trek for 1st - 3rd level PCs.

Lord of the White Fields - Dungeon Magazine, issue #184
Also originally a 4th edition adventure, this side trek explore what happens when a sliver the Ghoul King's power leaks into a small village. This is another zombie... er... ghoul apocalypse style adventure that make the PCs solve the mystery before the realm is overrun by ghouls. This was also a lot of fun to run when my group played 4e. This has not been converted for D&D 5th Edition, but a quick conversion using the ghoul and ghast stat block right out of the Monster Manual would likely create an adventure for about levels 4 to 6 (give or take).

The Chapel on the Cliffs
An army of skeletons drives away explorers of this ruined, cursed village. What secret are they guarding? Memorable NPCs and multiple paths to the end point make this adventure an thrilling story. More than just a one-shot, this adventure contains 10 to 15 hours of play!  Scaleable for PCs levels 2 through 6.
Dead by Dawn - Dungeon Magazine, issue #176 (and 5e conversion)
Originally written for D&D 4th edition, this Dawn of the Dead hommage takes place in a ruined temple where the PCs must hold out until dawn while wave after wave of under attempt to break in and devours the poor souls. An 5th Edition adventure conversion guide (written by yours truly) costs less than 2 bucks! Conversion for level 3 PCs. This was also a big hit with the group, and I tied it into the Namjan Forest story line. The key is to keep the pressure on. It's a timer encounter, and each time the clock ticks, things just keep getting a bit worse. 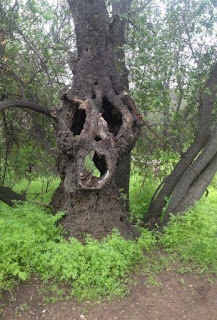 The Haunted Cornfield
A free Halloween themed 1st level side trek from D&D Beyond.
The Witch of Underwillow
When wolves drag a child into the forest, there is only one option: find brave adventurers to follow the wolves and save the child! A short adventure for levels 1 to 3.

The Ghost and the Peddler
A unique take on a "haunting" with lots of role-playing potential. For levels 3 to 5.
The House of the Midnight Violet
For levels 4 to 6, the PCs uncover clues to the lives of the former occupants as they explore this creepy mansion. 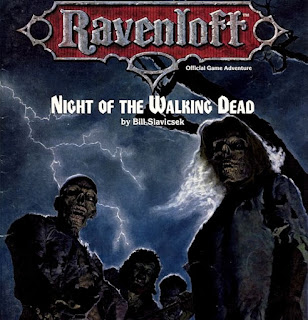 Night of the Walking Dead
Noted in the comments by one of my readers, Night of the Walking Dead is a classic zombie horde adventure written originally for AD&D 2nd Edition. This adventure would be fairly easily translated to 5th Edition with a straight conversion using the D&D 5th Edition Monster Manual and still have the roughly the same encounter balance. For levels 1 to 3 (perhaps leaning toward the higher side of that range). UPDATE: This now has a conversion on DM's Guild.

(Oh, and please add your own suggestions in the comments!)
Posted by Raging Owlbear at 3:49 AM 2 comments: