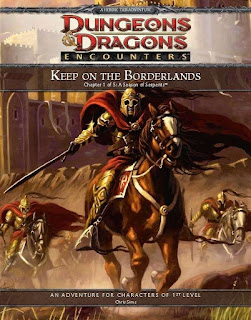 Product support from Wizards of the Coast through the Dragon Magazine and Dungeon Magazine PDFs (D&D Insider) was one of the “hidden” treasures of D&D 4th Edition. Dungeon Magazine in particular was a phenomenal resource for short (1 to 3 session) adventures that could be dropped into almost any campaign. This holds very true for the Chaos Scar series of adventures published in Dungeon #171 (October 2009) through Dungeon #197 (December 2011). The Chaos Scar adventures were a loosely connected sandbox campaign revolving around gemstones infused with chaotic energies from the Far Realms meteorite. While the adventures were set within the Chaos Scar region, most were setting neutral enough to be used in any campaign. I utilized several of these mini-plots in my own Reavers of Harkenwold campaign (see prior post).

Between the content within the Keep on the Borderlands: A Season of Serpents (only $5), the various adventures, and setting background contained within issues of Dungeon, the Chaos Scar made for an excellent sandbox campaign or idea resource for your homebrew game. I won’t be able to highlight every great adventure in Dungeon #171 to #197, but I’ll try to hit the issues I found most valuable (Dungeon #176, in particular). I do provide a full list of them below.

Dungeon #176
Keep on the Chaos Scar (Mike Mearls) - Background on Restwell Keep as well as majors NPCs and events around the Chaos Scar. A must-have for a Chaos Scar campaign.
The Crossroads (Rodney Thompson) - An inn and trading post populated by unsavory types set within the Chaos Scar.
Dead by Dawn (Aeryn Rudel) - Hordes of undead trap the PCs in an abandoned church. Can they hold out until the sun rises? Dead By Dawn is an amazing undead adventure that can be dropped into any campaign or run as a Halloween one-shot. There’s even a convenient 5th Edition conversion guide.

Dungeon #171
Stick in the Mud (Aeryn Rudel) - Bullywugs have taken over a ruin overflowing with mud. Thematically, this adventure fit well with the Bullywugs in Reavers of Harkenwold, but it is generic enough for just about any campaign.
Den of the Slave Takers (Rob Heinsoo) - Myconids, cultists, undead, and a one-armed gnoll. This adventure has it all, including some non-standard terrain to make things exciting.

Dungeon #180
The Pillar of Eyes (Robert J. Schwalb) - The PCs investigate an otherworldly stone pillar covered in eyes. What bizarre mystery created this... monument?
Down the Goblin Hole (Gareth Hanrahan) - What campaign is complete without a goblin war chief in a cave full of spidery minions? (Hmm... I sense a pattern).

Dungeon #182
Vanguard Tower (Rob Wieland) - A beholder has taken up residence in the Chaos Scar with a couple captive rust monsters. What could it be up to? Nothing like a Beholder (even a lower level one) to make your party poop their collective pants!
Wayward Wyrmling (Aeryn Rudel) - A group of ambitious kobolds takes an orphaned dragon under their metaphorical wing. Which will win, nature or nurture? Another excellent adventure short, generic enough for any campaign.

There are too many excellent adventure shorts to detail them all, but I have listed them with their respective Dungeon issues below.


Next: Part 3 - Dungeon Magazine
Posted by Raging Owlbear at 3:00 PM