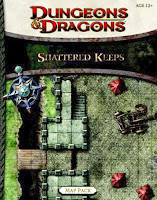 Side note: The revised moat house poster map (among others) can also be found in the excellent Shattered Keeps map pack.

I thought the Cult of Chaos version tried too hard to include bits of everything under one roof, but my players really enjoyed it when I ran it as a 5th edition conversion. They also experienced the first PC death in the game when the “reptile god” used its dominance power to force the rogue PC to stab the monk. With sneak-attack damage, the already wounded monk was killed on the spot. It added an emotionally shocking moment to what may have been an otherwise typical combat... and they were really surprised that they were facing such a powerful foe. 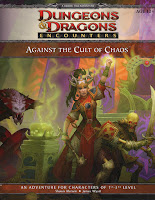 The D&D Encounters version came with stats for the D&D Next playtest, so conversion to 5th Edition was fairly simple (although Lareth was a little weak, so I buffed him a bit). It is a shame this module is not currently available in the DM’s Guild, as I think it serves as a fascinating artifact during the bridge between editions.

Lastly, Dungeon Magazine #221 also touched upon the history of Hommlet in the The Battle of Emridy Meadows, a prequel adventure prior to the fall of the Temple of Elemental Evil and its moat house outpost. This adventure also includes stats from the D&D Next playtest making it simple to run in 5th Edition.

Using Against the Cult of Chaos as a rough guide, one could take the original T1 Village of Hommlet, N1 Against the Cult of the Reptile God, B2 Keep on the Borderlands, and some of the content from Dungeon Magazine and cobble together a low level campaign based around Hommlet. Place Hommlet on the outskirts of the Duchy of Harkenwold, and there’s probably enough grist in the mill for a fairly long-running low level campaign.

Posted by Raging Owlbear at 5:04 PM