D&D 5e Does "Old School" Better Than Many OSR Games

So, there was a little bit of an debate started in the comments of +Stan Shinn's posts about 5e. He basically asks the question "Is D&D 5e old school?"

[Side Note: I'm working on a B/X-style variant of 5th Edition that fits this idea well.]

Of course, that started the typical "Yes, it is - No, it isn't - Just what is Old School?" debate.

In one of my comments I noted that I believe 5e is a better at the old school play style than many old school systems, but didn't have the time or space to elaborate on that thought. So, I wanted to follow that up with what will likely be a controversial post...

But before you get your nerd rage up in my grill and pull out the flamethrowers, listen for a moment an consider my hypothesis. Also, this is a bit of a long article, so bear with me and please read to the end before setting fire to the comments.

First, I need to define what "old school" means to me. It may not always fit everyone else's definition (and it appears there are dozens of them), but it is important for me to define so one can understand my hypothesis and I believe my definition generally conforms to the OSR community as a whole:

1) Rulings over rules - DM interpretation and application of common sense trumps Rules As Written.
2) Role playing is encouraged by emergent play, not explicit game mechanics.
3) Mechanics stay out of the way (as much as possible) of the story (closely related to #2).

For me, the "old school" play style is not tied to specific game mechanics (such as save-or-die, descending AC, THAC0, lack of defined skill list, etc).

Others believe it may also encompasses the following aspects (although this varies from game to game and I disagree that a game requires these to be considered "old school"):

As a side note, if you enjoy an given OSR game, I want to make it clear I am NOT saying you are having BadWrongFun. This post is just to educate to people who have an incorrect assumption that 5th Edition doesn't do "old school". Continue to play whatever version you love; just don't tell me 5e isn't old school. It most definitely is.

So let me address why I think 5e addresses each of these of the above points, sometimes better than even some of the original D&D rule sets. While Gary Gygax and Dave Arneson were both incredible visionaries, it's clear from the rules that neither of them were outstanding game designers. AD&D was a hot mess of mismatched and inconsistent rules. Whether that was more due to Gary's influence than Dave's is a topic for another day. So let's get back to the philosophical points that make a game "old school".


I'm not sure I need to go into detail on this one. It's pretty abundantly clear in the writing of the new system that the designers are emphasizing that the DM is the arbiter and that the rules are meant to provide a standard framework. However, each DM may implement them in slightly differing ways. I believe the 5e books communicate that pretty well, so I'm not sure I have much else to say on this point.


This one is a bit more tricky to define. There a very gray area where one must ask "How much mechanical detail is too much?"  AD&D appears to stomp all over this. AD&D has charts, tables, systems and subsystems for all kinds of minutia and appears to violate the OSR "rules light" philosophy, while at the same time is the model for many OSR games (alongside the Basic / Expert sets).

I also believe this philosophical goal of the OSR is more dependent upon the DM than the rule set. The DM has the ability to encourage role playing from his group by the way he runs the game regardless of the mechanics themselves.

From my perspective, 5th Edition appears to strike a good balance. The rules provide a good framework with a fair amount of detail, but tries not to get into minutia.

#3 - Mechanics stay out of the way of the story.


I believe this is where D&D 5e shines. By simplifying mechanics and streamlining the rules, 5th Edition keeps the fiddly-ness of the rules at a minimum.

Side note: As I was writing this post, +Shane Harsch totally made much of this article superfluous with the following quotes:

And... "That doesn't make it wrong, but that has prevented me from enjoying much of the OSR movement because it seems grounded in replicating the past without consideration for the progress that has been made in game mechanics." (emphasis added by me)

Arg. I hate when people say something better than I have in a shorter, neater package!  :)

I know that not all OSR games ignore advances in game design, but many of them are hung up on replication mechanics that appear in AD&D or Holmes/Moldvay editions which seems antithetical to me given that part of the OSR philosophy is that mechanics should get out of the way of role playing. The best way to achieve that goal would appear to be streamlining and improving those mechanics... which is what many OSR games avoid in order to be considered "OSR" by the community... A bit of a Catch-22. 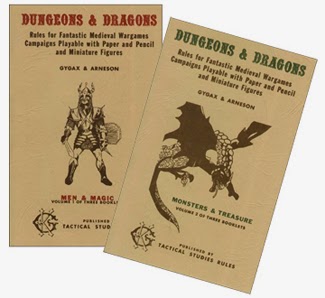 I think this is also why some people really like some OSR games like or Adventurer, Conqueror, King or Lamentation of the Flame Princess both of which build a very simple encumbrance system by throwing out the math. That, to me, is good OSR design. It ejects what was bad about the old and attempts to improve upon it with new mechanics.

I think 5th Edition also does this well. The designers looked at the whole span of D&D over its life and tried to keep what was best in terms of game mechanics, including adding new mechanics, while maintaining what was good about the way D&D was played in the past. While the mechanics may be considered "new school" design, the philosophy is definitely "old school" and I don't believe you can disqualify a game as "old school" simply because it does some things differently in the game mechanics. 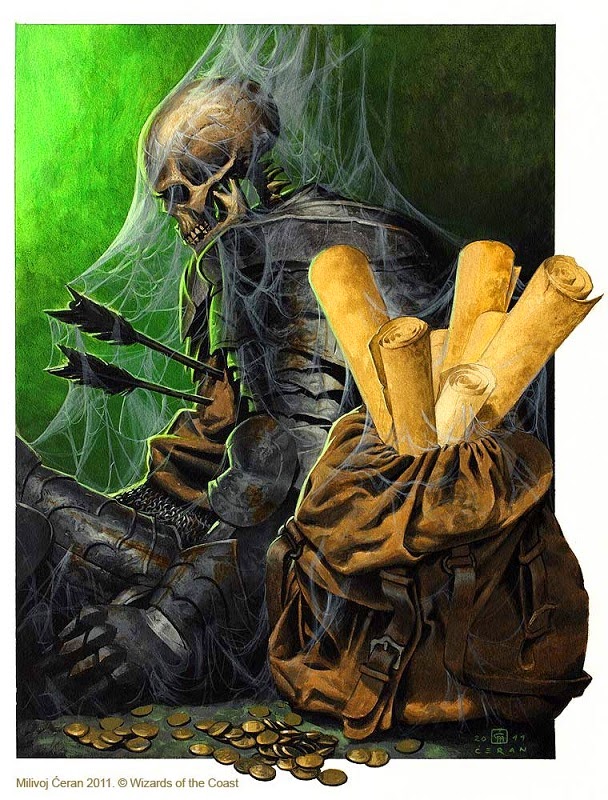 A Quick Primer for Old School Gaming has a description about finding a pit trap "illustrating" (and I use that term loosely) the difference between old school and modern game design. The problem with the pit trap example is that is it all bullshit. Basic D&D and AD&D have always had skill checks for things like he describes. Thieves had the "Find/Remove Traps" skill. Elves had a 2 in 6 chance of detecting a secret door just by walking by it.

The inference in the Old School Primer is that if your game has character skills that give a chance toward success at a task, it's not "old school" because that's not role playing. I say again: Bullshit.

D&D has always had attribute or skill checks. Want to persuade a guard to let you in to see the Lord Mayor? That's a Charisma check in an old school game. Want to do it in 5e? That's a Persuasion (Cha) check. There's no difference.

The only difference lies in how the DM handles the scene. Yes, a good DM would make you talk in character to the guard to encourage role playing at the table. If he thinks you have a justification to see the Lord Mayor and you role-play that justification, then he doesn't need to make you roll the dice. You just get to go in based on the role-play at the table.

On the other hand, if you're just trying to bullshit your way in and your argument is not convincing? Well, then perhaps you'd better try to make a good Charisma check. This is always how the game has played out whether using old school or new school mechanics.

For as long as there has been a Dragon Magazine, there have been articles discussing this topic about role playing a scene out versus rolling against a skill check for these kinds of tasks. This is nothing new and the same debate occurred all the way back in 1st edition and Basic D&D... so to say that this is an artifact of "new school" game design is a bogus straw man.

Just because a game system has skill checks, doesn't mean it's not old school. How those skill checks are best used as adjunct to role playing at the table is very much part of the DM's skill and play style.


I personally don't agree that resource management is one of the required pillars of old school play, but I will at least address the point for those that do. While 5th edition doesn't emphasize resource management, it's extremely easy to play a 5e game that does. 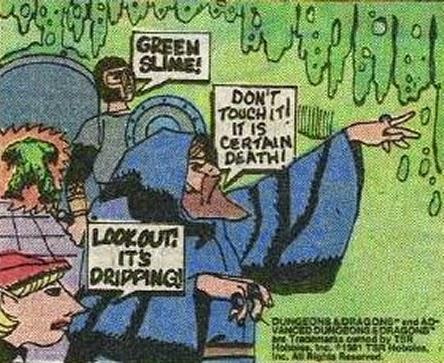 Don't like that casters have damage dealing cantrips? Get rid of 'em! (or limit their use to X times per day like other spell slots). Don't like 3 death saves? Make it one. Or none. Make death occur at 0 hit point. Don't like overnight HP recovery? Throw it out. Get rid of second wind or spending hit dice during short rests.

I don't know anyone who played Basic D&D or AD&D "by the book". That person doesn't exist. The fact of the matter is that we've always been house ruling D&D. That's also part of the DIY philosophy of the old school movement. So why is it that 5e isn't considered old school simply because one must house rule a few of the mechanics? That's a double standard. No OSR game is played 100% RAW. That's part in parcel of the nature of the DIY home brew game.


In my opinion, D&D 5th Edition supports the "old school" play style even better than some of the original D&D rule sets and a number of OSR titles. It unshackles the players and DM from the inconsistent and inefficient rules of earlier editions while maintaining the feel and play style of the earliest incarnations of the game. Just because it uses improvements to game design that have come over the last 30 year does not disqualify it as "old school". By that definition, only retro-clones would truly qualify as "old school". On the contrary, those modern design improvements help put the focus back on exploration and role playing by getting out of the player's way.

And remember... This is my opinion. It doesn't invalidate yours. I just want you to take into consideration what I have presented with an open mind. 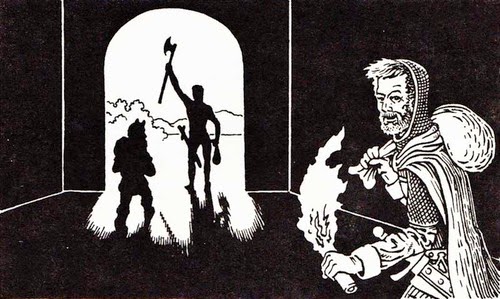 Posted by Raging Owlbear at 4:42 PM