So, I've been meaning to write about this for a few months now... About 6 months ago, there was a social media stir around this new "D&D virtual reality" tool called AltspaceVR.

To sum up, the players (using VR head sets) gather in a Second Life-esque virtual room to play D&D... on a flat surface... with dungeon tiles.


READ MORE »
Posted by Raging Owlbear at 4:34 PM No comments:

Tyrants of the Underdark (Origins Preview)

At Oigins last week, I got the opportunity to try out a few games that are debuting this summer/fall. One of them was Tyrants of the Underdark, a deck-building board game scheduled for release on July 12 at $75 (Amazon currently places the release date on July 28). The game was designed by Peter Lee, Rodney Thompson, Andrew Veen and produced by Gale Force 9. Peter Lee and Rodney Thompson were also designers on Lords of Waterdeep.

READ MORE »
Posted by Raging Owlbear at 5:17 PM No comments:

My wife and I were fortunate enough to attend Origins 2016 in Columbus, OH this past weekend. It was the first time in over 5 years having a vacation without kids (Thank you, Grandma Diane, Papa Frankie and Great Aunt Donna!). To say that the weekend was hotly anticipated would be an understatement... and our expectations were almost entirely met!

Origins did have a registration snafu on Wednesday due to some down computers (people always blame the computers), but we were lucky enough to miss all of that. By Thursday morning, the Registration and Pre-Registration (Will Call) lines were not terribly long and we got our badges and tickets in 15 minutes, tops. They did. however, have a snafu with printing the coupon books, so many of the vendor booth SWAG was not available to a great majority of attendees. That was a pretty bad screw up. I mean, when you pay $55 just to get in the door (no games included), you expect to get some SWAG... or at least a coupon to buy some SWAG at a discount.

I won't bore you with a blow-by-blow, but will hit some of the highlights.

READ MORE »
Posted by Raging Owlbear at 4:59 PM No comments:

Wizards of the Coast announced two new books for the fall (and miniatures to go with them). 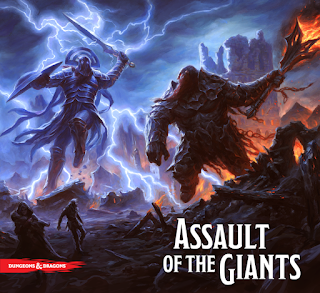 It will be interesting to see how different the plot will be from the old G-series modules, and I'm looking forward to browsing this book to see how they handle the plot.

I haven't actually purchased any of the other adventure paths. I was curious about Princes of the Apocalypse but one of my players was already running that in a different group so I passed it by. Curse of Strahd also looks pretty good but I'm not looking to run a horror game at the moment... So Storm King's Thunder is really the first adventure to give me some sense of excited anticipation.

The second announcement was about Volo's Guide to Monsters. 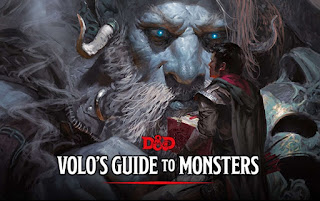 To me, this is an even more intriguing announcement.There is a lot of speculation about this particular offering. From what we can tell from the official announcement, it will add some fluff about iconic monsters already present in the Monster Manual, as well as re-introduce a number of others that have not had 5th Edition stat conversions as of yet.

What makes this book intriguing is that it appears it may borrow ideas from Monster Vault: Threats to the Nentir Vale.

During 4th Edition, Wizards second Monster Vault book took existing iconic monsters, and created "monster groups"... Basically, variants that differ from the typical iconic monster's stat block a bit to provide variety. As an example, you might get new stats for an Orc queen, a war chief, a shaman, Half Ogre and Half Troll variants, etc... Or an NPC faction with stat blocks for the different kinds of faction members (such as the Iron Circle, or Dythan's Legion), or even a special monster NPC, like Calastryx, a red dragon with 3 heads. 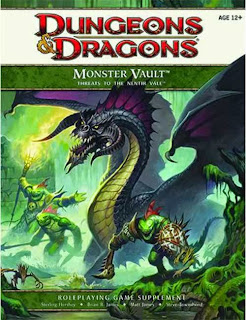 Threats to the Nentir Vale was one of the best books ever produced by Wizards of the Coast in that it wasn't just another Monster Manual. Each group entry had a backstory and campaign hooks that could be dropped right into your game as a named NPC or faction. Even though it was set in the Nentir Vale, the hooks were generic enough that any home game could use what was in the book with little modification.

I don't know for certain the Volo book will take a similar approach, but it would be excellent to have a similar book created for 5th Edition with campaign hooks and background fluff. It would be preferable if it were not limited to the Sword Coast, but expanded to other parts of the Realms. Better yet, it would hopefully be generic enough to use in any home game.

Will it present details on more monstrous PC races? Will it add Feats, Backgrounds or other player options?  Hard to say. I actually like that Wizards has stayed away from creating too many player options that can be abused. Splat books almost always created unnecessary power creep in prior editions.

Outside of what appears in the official announcements, we don't have much information about what we might be getting, so all of this is just rampant speculation. However, I'm hopeful that Wizards is learning what has worked well in 5th Edition (as well as prior editions) and keeps improving their products using lessons learned from the past.


Posted by Raging Owlbear at 3:11 PM No comments: