Tyrants of the Underdark (Origins Preview)

At Oigins last week, I got the opportunity to try out a few games that are debuting this summer/fall. One of them was Tyrants of the Underdark, a deck-building board game scheduled for release on July 12 at $75 (Amazon currently places the release date on July 28). The game was designed by Peter Lee, Rodney Thompson, Andrew Veen and produced by Gale Force 9. Peter Lee and Rodney Thompson were also designers on Lords of Waterdeep.


"TotU" is a area control board game using a deck building mechanic. What exactly does that mean? Well, you purchase cards out of a shared Market deck similar to Dominion or Ascension. You then use the resources played from your hand to place troops on the board (or remove enemy troops) to try to gain control of an area. The player with the majority tokens in designated areas scores the points for that area at the end of the game.

The overall winner is determined by the points on the board, as well as the point values of the cards in your deck and in your promoted Inner Circle area (cards moved out of play from your deck). The latter part is most important, as the winner may not necessarily be the player with the most control points on the board. A player's deck and Inner Circle actually make up about 80% of their point total.


When you first sit down to TotU, it appears a bit daunting. Between the large board with lots of areas, the stacks of Minion cards for sale in the Market, and all of the action text and icons on each card, it feels a bit overwhelming at first. However, game play is actually relatively simple once you have played out a couple turns in your first game.

The cards have two different resource types - Influence (webs) and Power (swords). Webs are money. They allow you to buy more cards. (I think I was annoying the fellow running the demos a bit when I kept calling them "webs" instead of "Influence"). Swords (power) allow you to deploy troops, or assassinate enemy troops (or power special actions on cards). Unlike some other deck builders, there is no order to the the Buy vs. Deploy vs. Action phases as you play your hand. You can mix and match the order of the actions. The exception is when there is a special action on a card that affects other cards played that turn. Some of those actions may require the cards it affects to be played first. It sounds complex, but after you have played a few turns, the familiar deck building mechanics from other games are quickly recognized. The complexity lies more in what point strategy one needs to adopt.

Similar to Dominion, you also want to remove cards from your deck to make those special card combinations come out faster. In TotU, you don't trash cards, you "promote" them to the Inner Circle, which is actually a net positive to the end game because promoted cards are worth more points. So aside from the net benefit of having a smaller deck, you also receive more points toward the win. 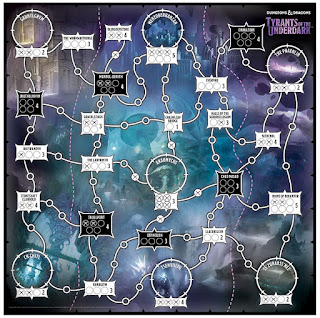 Like other deck builders, you can alter which Minion card sets get shuffled into the Market deck. The game comes with four Minion types - Drow, Dragons, Demons and Elementals. For each game, you pick two of the Minion decks which provides variety during re-play. Expansion decks are likely, as the deck themes mirror the D&D adventure paths released (Dragon Queen, Rage of Demons, Elemental Evil, etc...). I would not be surprised if Ravenloft and Giant-themed expansion decks were already planned.

The game is dripping with theme and unlike many Euro-style games, there aren't any ways you would want to help another player by trading or through alliances. I believe the British fellow helping us with the demo game (I'm sorry to say I've forgotten his name) caught himself from using the term "Ameritrash" when he was describing mechanics. I don't believe he would have meant it in a negative way even if he had slipped.

TotU just discourages any cooperative play in any form. There is a fair amount of luck swing in the card draw mechanic, and there is absolutely no trading... So, in a sense, it is the antithesis of a Euro-style board game. An alliance in this game would likely hinder more than help as you generally have to trade territories back and forth and backstab other players constantly to gain your points. From a theme perspective, it is quite fitting for a Drow-inspired game.


Unfortunately, in our demo game, we did not get all the way to the end scoring because we had a shortened time slot. However, the game play was enjoyable and engaging. Play time would appear to run about 90 to 120 minutes with 4 players, probably less with some experience.

One (very subjective) discomfort I had was that I really had no idea how well or poorly I was doing. This would probably lessen as I play the game more, so that's not so much of a negative as it is my personal mental block. I still enjoyed the game, but I'm a bit OCD about knowing how well I am winning or badly I am losing.

On a similar note, the area control aspect of the game can swing wildly during a single turn. Some area control games are a bit slower moving in that only a relatively small percentage of one's territory might be won or lost in a single turn. In TotU however, large potions of the board could change hands in the later part of the game based upon a lucky draw of particular card combinations by one or more players. This can become critical in the end game, as each other player gets one last turn after the first player has triggered the end of game condition(s).

For me personally, I'm not sure I am keen on big swings in the final turn, as it can add too much of a luck component on your final draw... but I haven't played TotU enough to know for certain if that would even be considered a negative. That in itself is not necessarily a game-killer for me because I do enjoy other games where luck can play a large role in the final outcome. 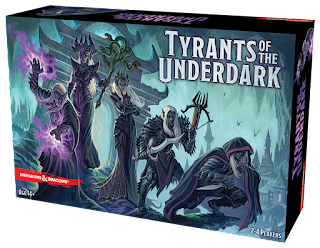 
My wife and I will almost certainly buy Tyrants of the Underdark in the not-too-distant future. At $75, we will probably wait up for a big birthday or holiday gift, as opposed to an impulse buy in the near term. If you like deck builders, you will probably enjoy this game. If you like the D&D Underdark as a theme as well, you will almost certainly love this game. I do look forward to playing this again... but perhaps not until a big birthday or major gift-giving holiday.

Posted by Raging Owlbear at 5:17 PM