So, I've been meaning to write about this for a few months now... About 6 months ago, there was a social media stir around this new "D&D virtual reality" tool called AltspaceVR.

To sum up, the players (using VR head sets) gather in a Second Life-esque virtual room to play D&D... on a flat surface... with dungeon tiles.

All of this 3D technology is wasted to generate a mediocre simulation of people standing around a box, while the actual virtual table top is TWO DIMENSIONAL. Did they actually do any market research on who wants this?

In Dragon+ a few months back, they actually promoted this technology as being "just like playing D&D in person".  Uh... no.

Actual quotes:
The focus is on being able to capture the feeling of sitting around the table with friends you haven’t seen in a long time. You’re able to sense them and you can tell who’s looking at who, and that experience is enhanced by gestures and silly voices,” says Bruce Wooden, head of developer and community relations at AltspaceVR.

Having a digital version of yourself aids communication, making it more natural: when you do something, your avatar does it, so you can nod, shake, laugh, wave, talk, glance, whisper, jump or fist bump. 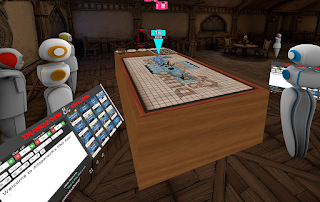 Ok, let's examine those statements at face value (you'll get that in a moment).

The little avatars don't really have faces. Or facial expressions... So basically, playing on Skype or Google+ Hangouts is already way better than this from a communication stand point. I understand they are trying to hype the technology, but comparing this with actual in-person play or on a web cam conference is rife with marketing BS. When I liken it to Second Life, that's not an unfair comparison in my mind. The graphics are somewhat late 1990's... The only "new" thing is that you get to look around with a VR headset... But that's not even the goofy part.

The virtual table top is 2D. Ok, so they have some little 3D miniatures, but the dungeon or wilderness representation consists of flat 2D dungeon tiles.

Compared to other virtual table top software like Roll20 or Fantasy Grounds combined with a web cam, I'll take the latter. I don't need to buy a $500 headset to use those. I'm wondering why are they wasting the 3D capability on the player avatars and not developing a 3D component for the actual game.


Now there have been several 3D table top systems "in the works" for the last few years, but no strong contender for a true 3D game has yet emerged. I'm not just talking about 3D tokens/miniatures on a flat space, but a true 3D virtual table top.

A couple years ago, Tabletop Connect Kickstarted a product that appeared to be a really great step toward a truly user-friendly 3D VTT... The video below shows the construction mode (there is another video out there showing pawns in the dungeon with 3D lighting and fog of war effects). Now this is what I call a cool freakin' use for 3D for D&D.

However, in the time since the Kickstarter, Tabletop Connect was acquired by Fantasy Grounds... and nothing new has been announced related to a 3D offering from Fantasy Grounds. I'm hoping this technology is not sitting on a back burner, because this was the first VTT that had me truly enthused.

3D Virtual Tabletop is another offering that looks pretty cool, but again it is not truly 3D. It merely allows some 3D elements (such as PC and monster pawns) to sit atop a 2D dungeon tile. I haven't played with it much beyond just loading it on my iPad. I don't know how well it works as a VTT with multiple players.

As I was writing this, I also found some software called BattleBox 3D, but I have not had the chance to dive into this offering. Their website is curiously devoid of any actual marketing language, and is really just a download link for the software. Hopefully, I'll have the change to take a hard look at them in the next couple weeks.


Am I being too hard on Altspace VR? Perhaps... You can judge for yourself by watching some YouTube videos of people playing D&D in Altspace VR.

I just don't see why you would spend so much of your development budget working on simulating the part of people sitting around a table, as opposed to simulating the 3D of the PCs inside the dungeon.

If I had my dream VTT design, it would allow the Players and DM to switch between an isometric or overhead view of the encounter like most VTTs now offer, and then zoom into a "first person shooter" view of the dungeon through the eyes of the miniatures within the game.

Giving the DMs the power to design a dungeon (like in the Tabletop Connect video above) and then having the players walk through it with a VR headset is a much better idea than just having them stand around a virtualized 2D table top. Someone download the Unity engine and get right on that!

UPDATE 07/07: After some discussion in the comments with +Bruce Cunnington, he pointed me at Tabletop Simulator which hits right in the sweet spot of most of my desires for the terrain part of the VTT. Add in some virtual lighting and fog of war... (and maybe character sheet support...) I need to look into this a bit deeper (a discussion on +Billiam Babble's G+ feed discusses some of the usability issues).
Posted by Raging Owlbear at 4:34 PM