In Episode 11, I reveal how I adapted the "Fixing Maelstrom" Reddit post to my own game. I also talk about how I tie all the loose threads and weak plot points together into a more cohesive (IMO) set of motivations for the major villains. Timestamps follow below the video.

Posted by Raging Owlbear at 1:38 AM No comments:

There are a lot of book on how to run the mechanical aspects of the Dungeons & Dragons, but not many of them are great at actually telling new DMs how to be better at running the game in terms of managing the table, players, or being a good servant leader. Here is my list of 5 beginner tips when starting out your journey as a new Dungeon Master.

Posted by Raging Owlbear at 2:08 PM No comments:

I've read a lot of new DM questions that come up on social media, and one that seems to really confuse a lot of newbies is the use of the Persuasion skill.

To make an ability check, roll a d20 and add the relevant ability modifier. As with other d20 rolls, apply bonuses and penalties, and compare the total to the DC. If the total equals or exceeds the DC, the ability check is a success--the creature overcomes the challenge at hand. Otherwise, it's a failure, which means the character or monster makes no progress toward the objective or makes progress combined with a setback determined by the DM.

It is important to note what it does not say in the rules about ability checks. Unlike attack rolls, a roll of 1 is not an automatic failure, and a 20 is not an automatic success. Success or failure is only determined by the total (roll + bonus/penalties) matching or exceeding the DC of the skill check. This is a critical point. If the DC is 10 and the PC has a +9 as proficiency in a given skill (as is often the case with Rogues), that PC will always succeed on a DC 10 or lower check, even when rolling a 1. Similarly, if the DC is 30 for some impossibly difficult task, that same PC with a +9 proficiency will always fail even if the player rolls a 20 (short of some other circumstance adding to the roll).

When you attempt to influence someone or a group of people with tact, social graces, or good nature, the DM might ask you to make a Charisma (Persuasion) check. Typically, you use persuasion when acting in good faith, to foster friendships, make cordial requests, or exhibit proper etiquette. Examples of persuading others include convincing a chamberlain to let your party see the king, negotiating peace between warring tribes, or inspiring a crowd of townsfolk.

Note that the rules mention "acting in good faith". This is to separate the circumstances between using Persuasion versus using Deception. There is a gray area between these two skills, but in general, if the PC is trying to lie or bluff their way through a situation, use Deception. If they are trying to influence an NPC (but without specifically lying), use Persuasion. It's a bit of a judgement call in some cases. For reference, here are the rules for Deception.

Your Charisma (Deception) check determines whether you can convincingly hide the truth, either verbally or through your actions. This deception can encompass everything from misleading others through ambiguity to telling outright lies. Typical situations include trying to fast-talk a guard, con a merchant, earn money through gambling, pass yourself off in a disguise, dull someone's suspicions with false assurances, or maintain a straight face while telling a blatant lie.

As you can see, the examples in the rules attempt to clarify the lines between Persuasion and Deception. Attempting to get an audience with the King is Persuasion. Deception is attempting to fast-talk a guard when you've been caught inside the Queen's chambers.

Persuasion is not mind control.

Based on my reading on social media, one thing that appears to trip new DM's up is what players can get away with using Persuasion. Persuasion is not the Charm Person spell. Persuasion is not the Suggestion spell. Just because a player rolls high does not mean they can ask for anything and the NPC will grant that request. As a DM, you are free to set the difficulty as high as you think it should be... even impossibly high if the situation warrants it.

If a stranger on the street came up to you and asked, "Hey can I take a look at your credit card for just a moment," would you give it to him? Look at the Persuasion actions of the PCs through that lens. Put yourself into the shoes of that NPC. Would you do what the PCs are asking?

Some things to consider:

Basically, how big is "The Ask"? No matter how urbane or charming a stranger on the street may be, I'm not about to hand over my credit card. DC 35, at very least.

Now, if your best friend came up to you and said, "Hey, I forgot my wallet and I want to buy that Funko Pop Drizzt. It's the last one, and I swear I'll pay you back!" Would you then give him the credit card (or loan the money)?
There is a difference due to the pre-established trust factor. I'm more likely to trust that my best friend is not out to con me, will pay me back, and not abuse our friendship... but maybe not all my friends. Perhaps, it's a DC 10. Or maybe this person is a very good friend, but I know they're not great at managing their money and I take a chance on not getting paid back for a while... DC 15? DC 18 perhaps?

As the DM, you need to set the difficulty appropriately... and a 20 does not guarantee a success.

You can also use an NPC's Insight to help or hinder the PCs attempts. Let's say the NPC is leaning in the direction of helping the PCs. If the PCs truly are motivated to do good or the NPC will directly benefit from the PC's actions, but is not certain they can trust the PCs, a successful Insight roll by the NPC might actually help, rather than hinder, the PC's attempt at Persuasion.

This is assuming the PCs actually are acting in good faith. But if the PCs are attempting to deceive, or perhaps their Persuasion doesn't give the NPC any direct benefit, a successful Insight might make the NPC hesitant, which leads me to...

Bribery is always a bit of a challenge to adjudicate. How much is enough? How little would be considered insulting? There are no good mechanics for considering bribery, except perhaps considering a) How much personal risk does the NPC take accepting the bribe? and b) How much value does the bribe hold for the receiver?

Offering a noble money is not likely to work. They risk their reputation, and they already have money to spare, so they would require a favor or object of great value. On the other hand, if you are just asking a guard or bartender discreetly for information, the risk is likely low, and a few gold is more than a week's pay, so that may go a long way toward loosening of lips.

Although Dungeons & Dragons does not have mechanics for honor or reputation, other tabletop RPGs often do (some of which can be easily adapted to D&D). Even if you do not use this kind of mechanic in your game, you can think back across the course of your campaign and consider what kind of reputation the PCs have built for themselves.

Even in a pre-telecommunications society, these events and stories will get around and the party's reputation will suffer. In a world where magical communication or bardic stories are spread far and wide, the PCs may find that their actions follow them far and wide as well. Keep this in mind when considering how NPCs react to their Persuasion attempts (and Deception, for that matter).

Lastly, I emphasize again to new DM's not to let your players get away with anything just because they rolled high...

Bard: My lovely Queen... Perhaps I could join you in your chambers later for some private consultation over a carafe of fine spirits?

Queen: Guards, have this churl executed for his impudence! 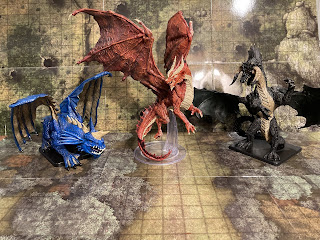 Hey folks!In today's video I unbox and talk about the Icons of the Realms Adult Red Dragon (~$70) which is one of the new huge miniatures (bigatures?) from WizKids. As you may know they've gone a bit dragon crazy lately, so it you're into big. nasty dragons for your game or display shelf, there's no better time to buy. In the video, I compare today's offering with the past ICONS Gargantuan Dragons from Wizards of the Coast back in the early 2000's.

If you don't quite have the cash for one of the larger adult dragons, there are some slightly smaller, or unpainted versions for much less, like the unpainted Gargantuan Red Dragon ($25) or the City of Lost Omens Adult Red and Adult Black together for around $50 (more links below).

WizKids also offers an Adult Blue, an Adult White, an Adult Green, an Adult Black, a Blue Dracolich, and a Green Dracolich. If you really want to go big, there's always Arveiaturace the Ancient White.

Posted by Raging Owlbear at 11:29 PM No comments:

April 1, 2021 - Grenadier Models announces a new Tiamat miniature for use with Dungeons & Dragons retailing at $398. They new model measures a stunning 8” from heads to tail.

“Not only do we have this fantastic new Queen of the Dragons, we are using a new casting material that is extraordinarily durable that we’re calling Plumbum, or ‘Pb’ for short,” says Grenadier CEO, Julie Guthrie.

“With our cheaper and more durable metal minis, WizKids can eats our dust!” 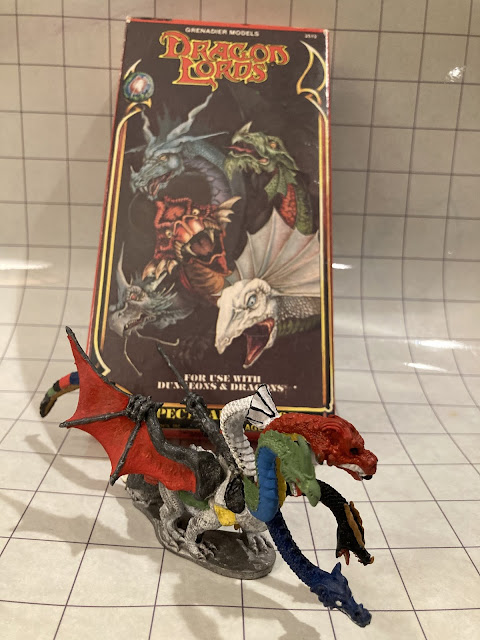 PS - Apologies to Julie. We love your sculpts!

April 1, 2021 - In a move that surprises many in tabletop roleplaying, Wizards of the Coast announced that the playtest for the 6th Edition of Dungeons & Dragons would begin as early as June 2021.

"We believe in striking while the iron is hot," notes Wizards of the Coast CEO Chris Cocks. "D&D 5th Edition is selling more that any edition in the history of the game. There is no better time than now to begin testing the latest ideas and improvements for the next iteration.”

Cocks continued, “We feel like we’ve milked this flumph about as far as it could float us, so it’s time hard core D&D fan ponied up for a new set of core rule books. The base classes for 6e will be limited to Cleric, Fighting Man, Magic User, Thief, Elf, Dwarf, and Hobbit.”

For more on this turn of events, see the official press release video below.

New D&D DM asks: Which hardback should I run?

I often see new Dungeon Masters asking on social media what hardback they should run after the Starter Set or the Essentials Kit. While the hardbacks from Wizards of the Coast are excellent, they are not always the easiest to run for newer DMs due to the sheer volume of adventure. In this video, I break down my recommendations for what adventure(s) to run next. Number 4 might surprise you!

The Village of Hommlet (4e)

Posted by Raging Owlbear at 2:12 AM No comments: