D&D: Giant Miniatures Are Back (and bigger than ever) Again! 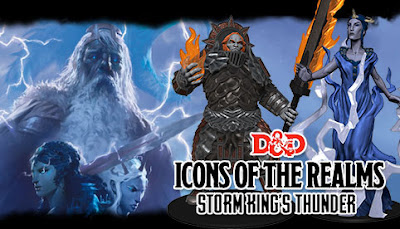 Due to the high price of plastic, larger miniature were quite expensive to produce, and were therefore almost always rare creatures. The sculpts themselves were also often not particularly large in order to save production costs. Wizards of the Coast tried to mitigate some of this problem by introducing booster sets that specifically included at least 1 large or huge creature in each booster pack, but large creatures were still rare and pretty expensive on the secondary markets. With Storm King's Thunder, Wizards of the Coast (through WizKids) has brought back huge miniatures, and they don't disappoint. It is likely the falling price of oil (the main ingredient in plastic resin) has made these much larger figures cheaper to produce than in prior years. (Makes a great Christmas gift!)