In previous Best of 4th Edition posts, I've talked about a couple locations that were ripe for adventuring, Harkenwold and the Chaos Scar.  But, I did not talk about the larger setting, the Nentir Vale.

Let me just put this out there...

In many ways, the Nentir Vale is the best setting available in D&D.

This is coming from a guy who has lived and breathed Greyhawk for most of my life (and a fair amount of Forgotten Realms). The Nentir Vale started its life as nothing more than few paragraphs describing the region around Fallcrest, an example "home base" town in the Dungeon Master's Guide. However, more bits of Nentir Vale backstory and lore were published in 4th Edition adventures such as the Keep on the Shadowfell, Thunderspire Labyrinth, and the Reavers of Harkenwold. I love Nentir Vale so much, I'm currently running my 5th Edition campaign in the setting.

As noted, the Nentir Vale is not burdened by a lot of canon or detailed down to smallest the villages and towns. A duchy here, a city-state there, but mostly only vaguely defined geography. The map contains a variety of terrain with a few dots on the map. Temple of Yellow Skulls. Ruins of Fastormel. Raven Roost. Kalton Manor. Kobold Hall. The Sword Barrows. Guardmore Abbey. The Keep on the Shadowfell... What are these places? No one really knows...

Ok, it is true that some of these locations eventually got their own adventures, but for the most part, the setting is still a largely undefined sandbox within which the DM can build their own sand castles.

To me, Nentir Vale feels a lot like the original Greyhawk map folio or the very, very early days of the Forgotten Realms where there are swaths of land and map features which are largely undefined. However, even Greyhawk feels "settled" by comparison when you look at all the political borders. By comparison Forgotten Realms is over burdened with canon and detail after 30 years. Nentir Vale feels fresh and open. There are even maps of the larger world of Nerrath if you desire more huge tracts of land.

I've already written about my Reavers of Harkenwold campaign and how my players enjoyed that corner of the Vale. Fallcrest is another wonderful backdrop with a variety of hooks and adventure locations. Fallcrest sits upon a broken plateau with an upper and lower city. Could some natural or magical disaster have created the elevation difference between the city halves? Much of the lower city in ruins, but it is unclear whether the it is the result of Orc incursions in the Vale, or other cataclysms that may have befallen the city. It's up to you to decide!

A number of locations are defined in the Dungeon Master's Guide with several adventure hooks. Further hooks and political intrigues are detailed in Monster Vault: Threats to the Nentir Vale. However, like much in the Vale, Fallcrest has a large canvas upon which the DM can fill in the details. I love this city. It's large enough to have lots of different encounter options, while still not feeling so massively sprawling that it is overwhelming for the DM to detail.

The points of light concept from 4th Edition is one which brings D&D back toward its roots. Life in town is relatively safe... but the wilderness is not. You take your life into your hands when traveling outside of the safety of your home, even along important trade routes. Civilization, for the most part, has fallen into a dark age leaving behind the ruins of the past. There are still small, sporadic kingdoms, but no vast empires or major political powers. Leaders hold mainly onto smaller parcels of land and rule locally.

Monster Vault: Threats to the Nentir Vale took the Nentir Vale lore to the next level. As a creature catalog, it was an excellent resource for building non-homogeneous encounter groups. However, the absolute beauty of this supplement was how much NPC lore it contained. 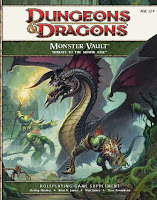 Whether it is Calastryx, the three-headed red dragon, the savage Bloodspear Orcs, the warring Treants of the Winterbole Forest, or the druids of Harken's Heart, there are a multitude of unique villains and faction groups which the PCs may encounter directly or indirectly through their agents.

Take this entry from Vestapalk for example:


Rousted from his lair in the Cairngorm Peaks by dark visions, the green dragon Vestapalk and his kobold wyrm-priest companion are bound by what they believe to be a common destiny.

Threats to the Nentir Vale is a supplement book done right. Not only did it improve upon the monster mechanics for D&D 4e, it is filled to the brim with the kind of setting fluff that sets a DM's imagination on fire. Even if you never played (or ever plan to play) D&D 4th Edition, this book is an amazing read for ideas and campaign hooks.


Although the Nentir Vale never got its own full setting book, plenty of setting detail can be gleaned from lore within the Dungeon Master's Kit, Monster Vaults, Hammerfast and Vor Rukoth supplements and occasionally the pages of Dragon and Dungeon PDFs published under D&D Insider. Taken all together, the Nentir Vale is a rich setting filled with potential plot hooks, but sparse enough for DM's to paint in their own details.

Postscript: An amazing collection of Nentir Vale setting lore has been posts on The Piazza. This is your first go-to for a Nentir Vale based campaign.