Hey, Did You Know D&D 5th Edition Is Free?

If you frequest RPG-related social media, this article is probably not for you, since you likely know all of this already... but I'm putting this out there for those that may not realize there are a lot more free resources from Wizards of the Coast beyond the D&D Basic Rules. Share with your friends who may not have tried D&D yet! 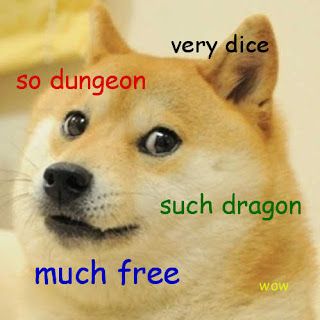 Unless you don't read RPG related social media (or live in a cave), you probably already know that the Wizards of the Coast released a free "Basic" version of Dungeons & Dragons 5th Edition.

The Basic version is trimmed down including only the 4 "core" classes - Cleric, Fighter, Rogue and Wizard. Similarly it only included the core races, Dwarf, Elf, Halfling, and Human. It also excludes Feats, but otherwise is a perfectly playable mechanically complete version of the new edition of Dungeons & Dragons. There is even a subset of the Monster Manual which includes the majority of standard D&D monsters for free.

What one may not know is that Wizards of the Coast also released the 5th Edition System Reference Document (SRD5).  The SRD is a PDF that includes the classes that were not included in D&D Basic PDF (Barbarian, Bard, Druid, Monk, Paladin, Ranger, Sorcerer, and Warlock) as well as the additional races from the Player's Handbook, Magic Items from the Dungeon Masters Guide, and tons of creatures from the Monster Manual.

The SRD5 does not contain all of the class path options (selected at 3rd level), but it has the primary path for each class, which is more than enough for a complete game. How much would you pay? 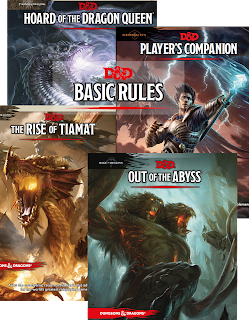 Each time Wizards of the Coast releases an adventure path, they often add supplemental materials for DM's who don't own all the books. These include more monsters, spells and even race or class options.

Of these free supplements, a must-download is the Elemental Evil Player's Companion. This document not only contains additional player races, like Goliath and Genasi, but also a boat-load of new spells that don't appear in the Player's Handbook (some of them were later released in Xanathar's Guide). Regardless of whether you have the D&D Basic Rule or the full Player's Handbook, this PDF is really indispensable for giving your players and campaign some additional spell casting options.

Between all these free resources from Wizards, you really have a complete version of 5th Edition that you can play for free (levels 1 - 20) using only these documents!

There's really no better time to try out playing Dungeons & Dragons. With all of the free resources from Wizards of the Coast, they don't even have to purchase any books to give it a try. Just some dice and friends... (well, you don't purchase your friends, but you know what I mean...)

If you're not certain about what D&D entails, you can start by reading my D&D Primer.


[Update 2]: A commenter (commentor?) pointed out I should mention D&D Adventurer's League which allows you to try out D&D at locals game stores for free. Lots of helpful players and DM's to assist new players. The Curse of Strahd aventure path starts in March, so you want to try out D&D, look up your local game store by zip code here: http://dnd.wizards.com/playevents/organized-play


[Update]: I got a lot of flack from certain places on social media for suggesting to use the SRD as a free resource for players (with one person falsely equating it with piracy)... One guy even went as far to "tell on me" to try to support his point of view. Didn't quite get the answer he wanted.


@marcus_penn it lacks some stuff, and the Basic Rules are better for beginners, but we're good with it. More RPG players is a good thing.
— Mike Mearls (@mikemearls) February 26, 2016

Posted by Raging Owlbear at 9:49 AM