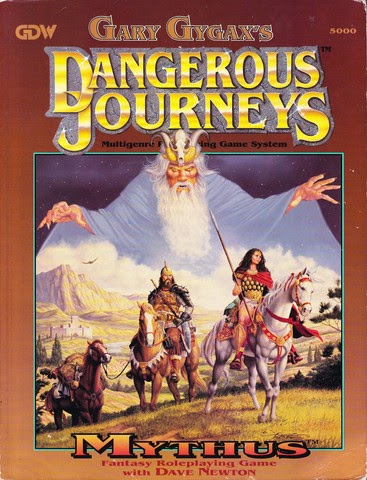 . I purchased these largely out of curiosity but also because I'm a bit of a "complete-ist" when it comes to RPG collecting (my wife would substitute the word "hoarder") and they were both relatively cheap.

But the key component was curiosity. I've always wondered what Gygax's works were like after he was ousted from TSR and worked on projects unrelated to D&D, but I did not own any until now.

In my post the other day about old school play style in D&D 5th Edition, I made an off-the-cuff remark that got some attention from a few people in the comments. It read:

"While Gary Gygax and Dave Arneson were both incredible visionaries, it's clear from the rules that neither of them were outstanding game designers. AD&D was a hot mess of mismatched and inconsistent rules. Whether that was more due to Gary's influence than Dave's is a topic for another day."

In the comments I later clarified with the following:

But they didn't know how to organize their thoughts into manuals that made clear how to play the game. [...] That's what I mean by "game designers". It's more than just making up the rules... It's also creating a presentation that others can easily follow, and those old books just aren't that good at that.

They are still in the pantheon of gaming gods... but their thoughts could really have used a good editor who understood training manuals.  :)

Aside from the evidence in the 0D&D and AD&D rule books, the other part of this statement resulted from my recent forays into the Dangerous Journeys books (which also have lead me to believe that Gygax, not Arneson, is largely responsible for the convoluted systems within AD&D... but I'm getting ahead of myself).

At over 400 pages, Dangerous Journeys is a bit of a fascinating beast. After Gygax was removed from TSR, he joined forces with Dave Newton and Game Designer's Workshop as the publisher (of Traveller and Twilight:2000 fame) to make something completely unlike D&D mechanically. Many of the differences were to protect himself and GDW from TSR litigation (which was somewhat unsuccessful, but I am getting ahead again).

At its core, Mythus (the Dangerous Journeys game engine), is a point-based skill system similar to games like GURPS or HERO. However Mythus keeps a thin veneer of a class system by bundling groups of skills together into "vocations". One can actually buy just about any skill in the game, but a character's vocation gives significant bonuses to its related skills (and opens up a small number of skills limited to only that vocation).

As an idea for character generation and development, I really like this concept. Your character has a "career path" of sorts and gets better at the skills you perform as part of the vocation. The game does allow more than one vocation (as a kind of multi-classing), but I haven't read through those rules in detail yet.

However, the game falls down quite a bit in its implementation. Gygax's verbosity and non-standard jargon is a major roadblock to comprehension. He seemed to have a real challenge breaking his ideas into digestible bits and the editor on the project appears to have had little to no influence on the development of the text. (It is also unclear how much influence Dave Newton had. The text is very "Gygaxian" in style). Also his love of random roll charts and math formulas makes what could be a relatively elegant idea into a mess of overly complex mechanics. 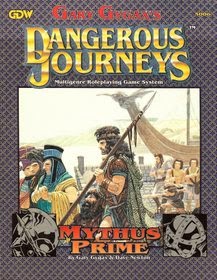 The game is also full of odd and seemingly random idiosyncrasies.

As an example, the "basic" version of the game at the front of the book called "Mythus Prime" is incompatible with "Advanced Mythus".  As an example, Traits in Mythus Prime (abstract attributes such as "Physical", "Mental" and "Spiritual") are have a maximum value of "60" at character generation (which is considered very high). In Advanced Mythus, a Trait score of 60 is well below average. A "high score" in the Advanced game is over 100, often double of what is considered a good score in Mythus Prime.

To move from Mythus Prime to Advanced Mythus, there is a conversion of sorts, but you essentially need to go through character generation all over again. While there were difference between D&D and AD&D, the core mechanics were at the very least compatible, if not interchangeable.

Mythus Prime uses the 3 top level Traits to generate the scores for the PC's knowledge and skills. On the other hand, Advanced Mythus has 18 character attributes.  Traits contain Categories which then have Attributes (in a hierarchy) which are then used to generate knowledge/skills stats. This Trait hierarchy is probably the most convoluted character generation system I've ever seen (although, in fairness, I have not read the Role Master books).

Another minor example is found in the first step of character generation: you must roll 1d6+1 and consult a chart to find out your socioeconomic status. The results on the chart are numbered 2 through 7... Let that sink in for a moment. You have 6 choices, but you are asked to roll 1D6+1... and there is no #1 on the socioeconomic chart.

Even though this paragraph in character generation is actually relatively clearly worded (related to some of the other text), I re-read it several times to make sure I didn't miss something. Why 2 through 7 when 1 to 6 is functionally the same? Why isn't there a #1? What is the sound of one hand of Vecna clapping?

Interestingly, you can actually drop one status level based upon the vocation you select for your character (so a status 2 could technically become a status 1), but there is no mention of the missing status level and it is never referenced anywhere else in the rules. Its existence is merely implied by the section about selecting one's vocation and how that might effect socioeconomic status.

These are just a few examples. In order to truly Grok the writing of Gygax, you need to be a zen master because sometimes what isn't stated explicitly may be as important as what is. Or possibly not. That is the Tao of Gygax, I suppose. Or perhaps he just isn't that disciplined as a game designer.

So what happened to Dangerous Journeys? 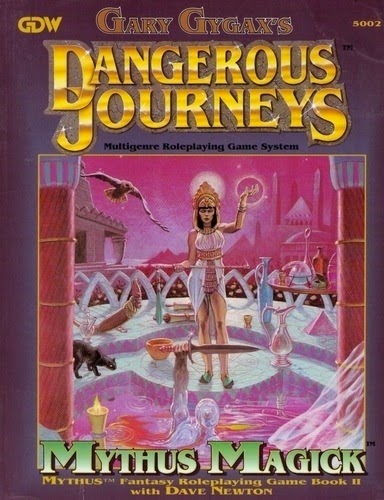 After the release of the Mythus rules and a few related game world books, TSR sued Gygax and GDW claiming Dangerous Journeys violated the copyright of A/D&D. It obviously did not as Gygax painstakingly avoided using terminology common in D&D substituting his own new terms.

After a lot of time and money spent on lawyers, TSR agreed to purchase all rights to Dangerous Journeys from GDW. Gygax later relayed a funny quote related to the settlement:

"I suggested to TSR (Lorraine Williams) that the next time I wrote a new RPG they just offer me $1 million for the rights to it, thus saving at least that much money."

Prior to the settlement, apparently GDW created an expanded version of the Mythus Prime rules which (from my reading) left out much of the complexities of Advanced Mythus, but I have yet to find copies of this for a reasonable price I'd be willing to pay. I am very curious about the expanded Mythus Prime. It appears there may be a small diamond in the sedimentary mess that is the rest of the system.


In the coming weeks, I plan to delve into specific part of Mythus to find and discuss those nuggets of creative genius among the dross of over-complexity. However, with 400 pages of Gygaxian prose to plod through, this might take a while.

was a bit of a rewrite of the concepts in Mythus Prime and was much streamlined as he moved toward more rules light systems, but I have not laid eyes on the text to confirm or deny that opinion. At some point I hope to get a glimpse of that system as well.

And finally, I'm not intending to rag upon Gary Gygax. His vision and creativity are not in question. AD&D, while convoluted and messy, was the game that enamored an entire generation of geeks (myself included) and gave each of us one of the greatest gifts of our lives. I will never truly be able to thank Gary for that.

While he is among the pantheon of gaming gods, clarity and succinctness eluded him. One might joke that elucidation was not one of his "domain powers".  Unfortunately, Dangerous Journeys is ample evidence of this paucity.

Let me know about  your experiences with Mythus, Mythus Prime or Lejendary Adventures in the comments.
Posted by Raging Owlbear at 5:39 PM