[Update 08/30/20]: A lot has happened in 5 years and this review is no longer valid. But have no fear. I have NEWER reviews.
Hero Forge has added the new "Plastic" and "Premium Plastic" offerings to their materials selection which solve the fragility and detail issues. An updated review of the new plastic and metal offerings is now posted. Read the updated review here! ]

Original (now out of date) article:
When I heard about Heroforge.com, I was excited to try their online character visualization. If you don't know, Heroforge.com lets you create a custom 3D model of RPG character in a variety of genres - Fantasy, Sci-Fi, Modern, Western or East Asian (Wuxia/Wushu). After you've created your custom model, you can then send it to their 3D printer to have your very own custom designed miniature!

Well... it certainly is in theory, but in practice it leaves some things to be desired.


Caveat: I mostly played with the Fantasy genre, so I have to admit I did not spend as much time evaluating the modern or science fiction character selections.

If you haven't tried their 3D modeling software, you should check it out right now... Actually don't yet. You should read the rest of the article first because if you go over there now, you might not come back for several hours, if you remember to come back at all.

Their 3D software is awesome. Aside from a few minor foibles, and perhaps a couple user interface items they could tweak, I think their model creation software is amazing. The range of poses and equipment available makes for a near infinite number of humanoid creatures that can be built from the 3D visualizer. One can customize the pose, body type, muscle mass, clothing, facial expression and even "booty size" among many other attributes.

There are occasional bugs where you cannot make a change to a selection (it gets "stuck" on a given piece of clothing/equipment), but these are easily fixed with a page refresh. If you register for an account and save your progress from time to time as you work, this is only a minor annoyance. It would also be nice to have a few more options in some categories. The number of weapons available for shorter characters (gnomes, halflings, etc) is somewhat limited because most weapons are human sized and appear way too large for a small figure. It would be nice to have a wider array of short sword, axe or hammer styles for these smaller figures, but again, this is a somewhat minor consideration.

As you create your character, you can rotate and view the model from numerous angles. I do not doubt you will be extraordinarily impressed with the 3D capability of their web site. For my purchase, I created my Gnome Druid and my wife's Half-Orc Fighter.

From Visualization to Miniature


After you have tinkered for hours and have your character "just right" (hint: If you're an OCD tweaker like me, it never is quite perfect) you have the option of purchasing the model in 30mm miniature size, 3 inch statuette or 6 inch statuette. For the 30mm miniature, you can choose the "Strong Miniature" or "Ultra Detail Miniature". I chose to purchase 2 Ultra Detail minis, so I do not have experience with the "Strong" version (as I had read they are way too rough in texture for painting). 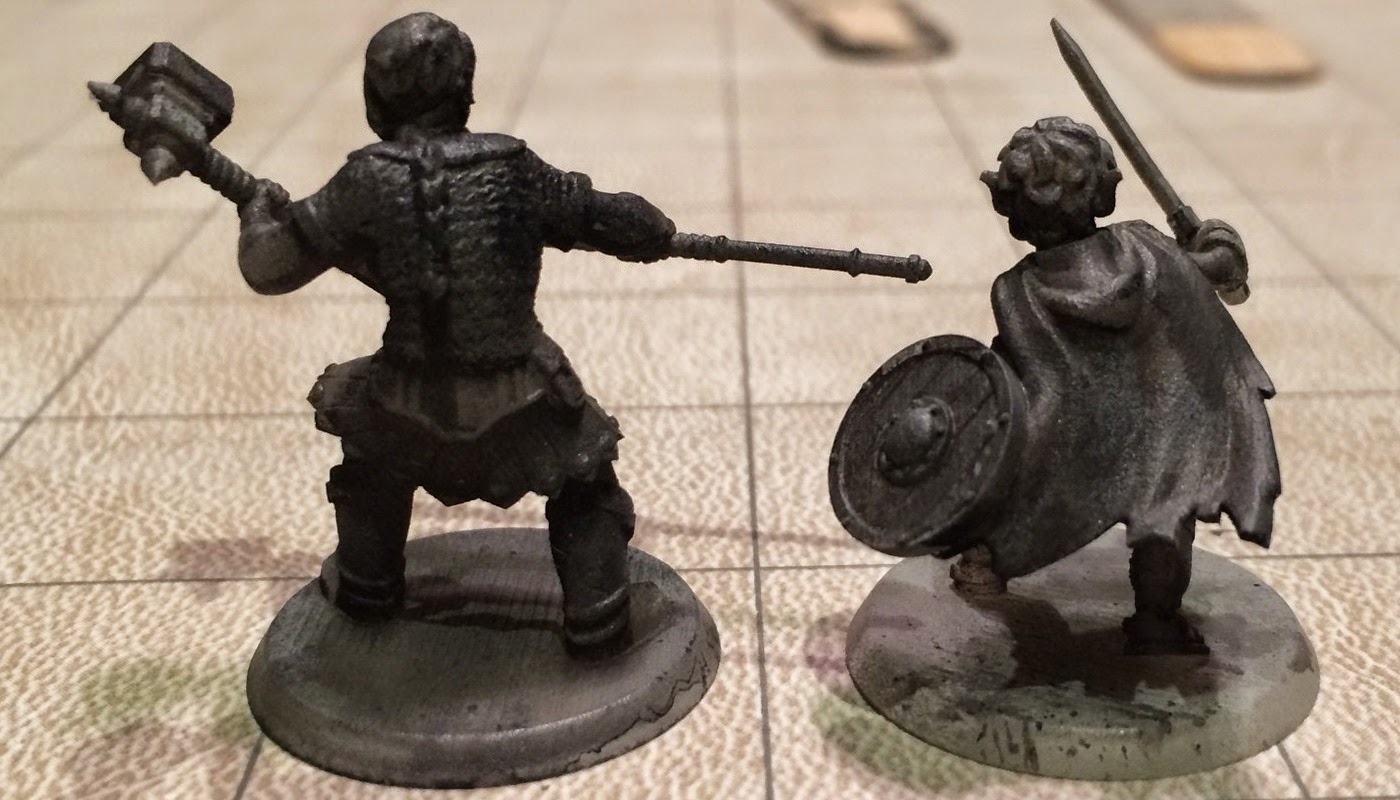 After my minis arrived, I was excited by the results. The clear plastic made it difficult to make out details, so I quickly set off to prime the miniature with grey Armory spray primer. In retrospect given the somewhat rough texture of the fig, a brushed on primer probably would have been a better choice. I still couldn't see the detail very well for painting, so I did a very light black wash just so I could plan my painting strategy. Coincidentally enough, the wash illustrated those places where the 3D printing has difficulty with detail. 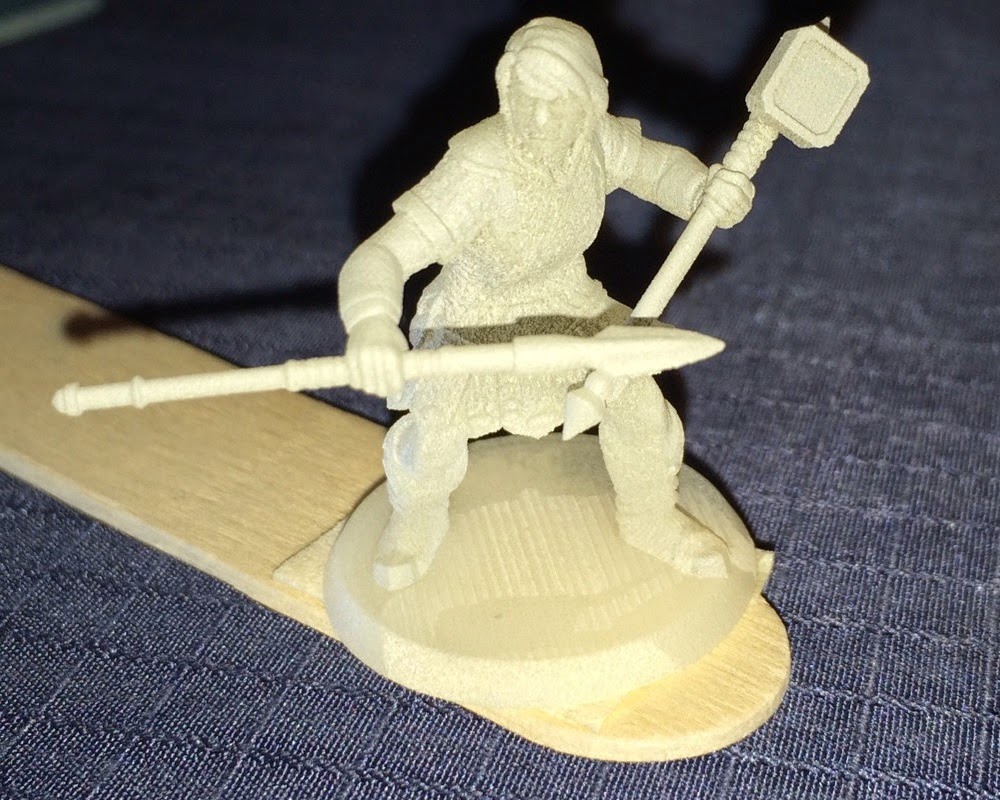 If you look closely at the photos, you can see that fine detail in the model is hindered by the "frosted" bits the printing process leaves behind. This obscuring of detail looks worse in the macro photos of the primed miniatures than it actually appears to the naked eye, but it is still apparent. It is most obvious on very fine detail like the chainmail shirt, but also hinders parts of the model that are less detailed. I noticed areas where a border from one texture blends into the next. As an example, the gnome figure has a toga-like shirt piece, but you can't see the transition from his shirt to the skin on his chest and neck. I will need to define this transition using painting techniques.


Handle Me with Care

"The ultra detail is brittle. SUPER brittle. Like, sneeze on your figure and break off your sword brittle. The texture is a little grainy, but holds more detail than flexible strong. Not bad for painting, but a metal mini, or even a Bones mini, is still going to look crisper in detail. Did I mention they're brittle? Any thin part is likely to snap. You can use these for play - if you handle them with surgeon-like delicacy and store them in angel down and kitten fluff for transport."

This is absolutely true. I was being extra careful when painting the mini, but when I accidentally placed a tiny amount of pressure on the sword... "PLINK!" My heart sank into my belly when I heard the slightly musical sound of the blade snapping from the hilt. A few hours after re-gluing the sword, the mini fell a meager 2 - 3 inches onto the table (covered by vinyl battle map). "SNAP!" The gnome's ankles fractured as if hit by Kathy Bates.

The best I can say about either of these incidents is that the breaks were "clean". It was possible to glue the parts back together, but that is not much solace. It is apparent that these $25 figurines will never be able to stand up to play. One collision with a stray die roll will almost certainly result in a snapped weapon or broken legs... and if your group is anything like mine you'll know that caroming dice is a common occurrence.


As much as I love the model creator, I cannot recommend Hero Forge miniatures. [UPDATE 05/2016: Check out the new review of the Gray Plastic option.] The visualizer is truly amazing software, but the fragility of the Ultra Detail models makes them unusable for play and the coarseness of the "Strong" miniatures makes them "unsuitable for painting" (exact quote from Hero Forge site). For $25, I hoped for more, but am disappointed in the result. The detail, while a bit coarse, is not a deal breaker for me given the customization, but the brittleness of the plastic is unacceptable.

Hopefully 3D printing will improve in the future [update: it has]  such that even detailed figures can be made from a tougher plastic, but for now it's just not ready for prime time.

Note: the Ultra Detail plastic is being phased out and replaced with a better option. Read the updated review.
Posted by Raging Owlbear at 3:08 PM