DRAGON+ Issue 3: Is it actually getting better? 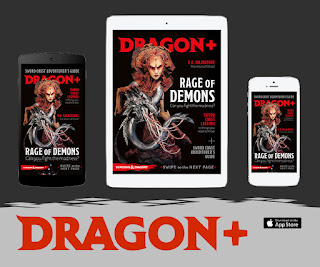 If you read my last two posts (here and here) on the new Dragon+, you'll quickly realize I do not hold this advertisement-disguised-as-a-magazine-slash-app in very high regard (to put it nicely). To summarize, my reviews say "it sucks" and "it still sucks" respectively.

So, to cut to the chase, do I still think it sucks?  Well, kind of maybe, but perhaps a lot less.

I'm not sure if I've already lowered my mental bar, or if it actually is improving, but I think it sucks a lot less. Does it actually not-suck enough to be good?

I'm not certain it is good, but I didn't want to scratch my eyeballs out like I did after the first two issues, so that's a definite improvement. Perhaps I'm suffering a kind of Stockholm Syndrome. I was mentally abused by the first two issues so badly, that even the slightest hint of potential has made me soften toward issue 3.


Ok, so here's where it definitely still sucks. I'm not sure what's going on with the app. Issue 1 was buggy, but it at least worked ok most of the time. The update that came with Issue 2 was bad. It crashed often and was a chore to actually read because of the instability.

I don't know how they could have possibly made the app even more unstable, but it freezes constantly on my iPhone 5S. It's not even like I have an old phone. It's a 5S, for Pete's sake. It may not be the newest generation, but it's not old and I don't have problems with other apps. I don't know how this app has so many 5-star ratings in the app store. It literally boggles my mind.

I was able to read issue 3 when I first downloaded the update, but then it took repeated attempts to re-read it for this review. The app constantly froze at the first screen. I couldn't view the new or old issues, or even scroll down to see their weak efforts at social media. Force quitting the app and even restarting the phone proved ineffective. The app seems to work only when it feels like it, which is infrequently and intermittent.

Even when I was able to get to the magazine content in one attempt, the navigation was largely unresponsive. If you clicked to an external link (which is easy to do accidentally from one of the many ads), you may as well force quit again because the built-in web browser included in the app is utterly unstable and generally guaranteed an application freeze. Even when working, its mostly useless since it is completely feature limited. There is really no excuse for how crappy the app runs after 4 months in production.

Unfortunately, I don't have time to run through the entire contents as I did in the prior articles, so I'll try to just pick out a few highs and lows. I may come back to this article to update the parts I need to leave out for brevity.

Cover - In the prior reviews, I didn't make a note of the covers because Issue #1 was just boring and Issue #2 was like a Guns and Roses cover band logo that made me shake my head. Neither of them lived up in any way to the amazing run of covers in the print edition of Dragon. Even the digital 4e Dragon/Dungeon PDFs had some quality cover art.

The Issue #3 cover is the first to live up to the name Dragon Magazine. The pictured sculpture is an amazing pieces of art and the cover doesn't do justice to the actual 3-dimensional piece (but there are more pictures inside). But bravo to Wizards of the Coast for taking a chance on commissioning this sculpture. It is an amazing work.

Adventurer's League - Sometimes I think +Robert Adducci is the only WotC representative that gets community outreach... and he's basically a volunteer, not an employee. Anyway, this issue's download of the D&D Expeditions' series of mini-encounters DDEX3-1 almost made me fall off my chair. Somebody listened. We actually got some RPG content in the magazine for people running a home game!

BUT... I think I need to moderate my excitement because as Mr. Murphy put it so well,
"If you're starving and somebody throw you a cracker, you gonna be like this: Goddamn, that's the best cracker I ever ate in my life!"

There also was a small background-related download in the Out of the Abyss advertorial, but it was really quite short and could definitely have had some more meat added to it. I would have loved to see some kind of article about adventuring in the Underdark (for DM's or Players). Another missed opportunity.

As for the other articles, they were all advertorials similar to the last 2 issues, but somehow they bothered me less. I don't know if the writing is actually getting better, so they are at least somewhat entertaining despite being advertorials, or I just got way too excited about the adventure download.

Even though I'm not a Drizzt fan, R.A. "Bob" Salvatore's interview was interesting. Like the Greenwood interview from the prior issue, it was there to promote the book coming out, but I did at least get some entertainment out of the anecdotes (although some of these same questions have been printed in other interviews). The Rage of Demons introductory articles (also thinly disguised adverts) as well as the Sword Coast Adventurers Guide were actually decent reads. Not a whole lot of content useful to the home game, but it did give some insight into the design of the story line and they had fun little "bios" for each of the demon princes. I didn't even mind the Sword Coast video game preview (pre-order click bait) that much.

I must be going soft.

So it's not as terrible as the first two issues. But they set such a low bar, that almost anything could be seen as an improvement. I'd give the content a C-, but lower the grade to a D for the instability of the app.

There is still massive room for improvement as the "magazine" is still pretty weaksauce. It would be an excellent use of this medium if more D&D Expeditions content were released through the app.