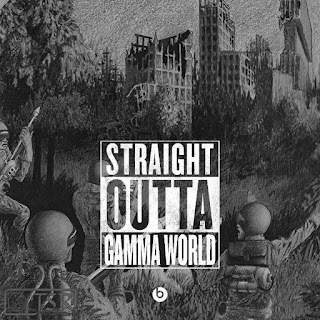 I'm a bit of a pack rat... So when I moved last year, I tried to reduce (not entirely successfully) some of the detritus I've gathered over the many years. But there was one thing (among many) I could not throw out. I came across a story I had written around 5th or 6th grade (circa 1981 or 1982) based on the many games of Gamma World my pre-teen friends and I played. Gamma World was our go-to game after D&D... and sometimes before it. My memories of the games are a little vague after 35 years but clearly the game made a distinct impression on the nascent writer in me.

This story was originally written for an English Composition class at a Catholic school in Maryland. Written today, it would likely generate a call to a student counselor, a local clergy, and possibly "the authorities." Keep in mind that (to my knowledge), I have not turned out to the a psychopath and my teacher must have seen some promise in my writing as I received a 4.5 out of 5 with a "Nice Job!" note instead of a "Please have your parents call me..." (and I have the pics to prove it -- http://imgur.com/gallery/hmj5P).

With all that in mind, I present to you, in its reproduced original text, the grammatically uncorrected 6th grade work entitled "Quest for Peace" (you will see the irony in that title shortly). (c) 1982 - 2016.

PS -- I hope Jim Ward gets a kick out of this. He was an inspiration for the 12 year old gamers everywhere.

The year is 2233 or sometime around then. The tribes have lost track over the years. The ancients had built a tremendous civilization of magic and technology. Things that you could not believe were happening. They built great shelters hundreds of yards high. Now these structures lie in ruin. Forty tribes have sprung from the desolation. Each tribe claiming territorial areas.

Legend has it that a great and powerful man did not like the world as it was, so he used a magical device to cast projectiles which cast the world into ruin, the world which we now call Terra. The large land area that the tribes rose from was a place called Aimerice or something close to that. The real name is unknown. It has been a hundred and some odd years since this destruction. Many men have developed a mutant strain and some animals have become extremely intelligent. Some have even learned the weapons of the ancients. They now pose a threat to our villages.

I along with other stronger villagers have set out to help eliminate the threat. My name is Cainon and this is my adventure.

We, my friends and I, set out well prepared. We were given ancient artifacts by our Shaman chieftian, who has some limited knowledge in the artifacts. One was a “projection stick”, which fires small rods about the size of one’s finger. Another weapon was a light beam intensity wand, which kills the target instantly. This one had only two charges left. The rest of our weapons were swords, axes and the like. We were also given a “bad air” sensor, which detects environments harmful to us. With all that we headed toward the “unclean” lands.

My comrads were Ranzor, who carries the “projection stick”, Kwint, and Flist who both packed bows and swords. I carried the light wand, an axe and a sword. We traveled over many hills with but a few scattered trees and very tall overgrown vegetation. As we were walking we spotted four Raybites (rabbit-men) approaching in the distance. We quickly ducked into the grass and luckily, they did not see us. We decided to pick them off quickly and quietly. Ranzor fired the “stick” and I fired the light wand. The others fired their bows. The battle was over in a flash. Ranzor hit one through the head, I burned holes through the chest of two in a single shot! The others caught the last one with their arrows as it was starting to flee. We knew were closer to our quest. We found a mini projection stick and more projectile rods on the Raybites.

We stopped to rest and east our rations. As soon as we were finished, Flist should, “grab your weapons, the Arks are coming”. Arks are 8 ft. tall canine men. They are very strong and cunning. there were but two of them and it was still a close fight. One was put down by Ranzor and Kwint with swords, but Flist and I had to use the mini-stick wand knowing we were limited in projectile rods. Finally the second Ark went down. After that we rested and tended our wounds.

We traveled for a short while and came to a wood where the path forked. We were debating over which way to go whin Kwint called out to me just in time for me to block the attack of a Hisser. A Hisser is a large intelligent snake with arms. I had to fight it alone because its tail is razor sharp and constantly on the move to keep anyone from attacking from the rear. It hit me on the leg causing me to fall. Then it launched a killer thrusting blow with its sword. I rolled out of the way just in time, its sword was stuck fast in the ground, this gave me the opportunity to strike it on the back of the neck, severing the jugular vein and killing it instantly. I fell to the ground and in pain from the gash in my leg. 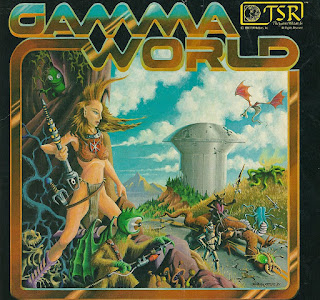 Finally we discovered their domain. The mutated creatures such as the Arks and Raybites live in a small ruined town. We camped out on the other side of the town where they didn’t go. We stayed for a couple of days to case the place but we couldn’t figure out a way to stamp out this alliance between the mutant races. We chanced upon a small chemical lab in the basement of one of the houses. There were just enough chemicals to make a rather large fire bomb. It took many days and no small risk but soon we had containers planted all over the complexes filled with flammable chemicals and other combustibles. Then we planted the main explosive. On the target night, just before dawn, we poured a small amount of gasoline around the main building. The hour had come. We lit the gas and ran for it.

First just a small fire, then it caught on, spreading rapidly. The main explosive went off, the smaller ones. Within a minute everything was ablaze. I fired the last charge of the light wand, setting off more fires. One by one we picked off the escaping mutants.

After a long drawn out assault we were victors. All of the mutants were either dead or chased out, most being dead. We returned to our village as heros. We had accomplished our quest for peace and everything was relatively quiet....... at least for now...