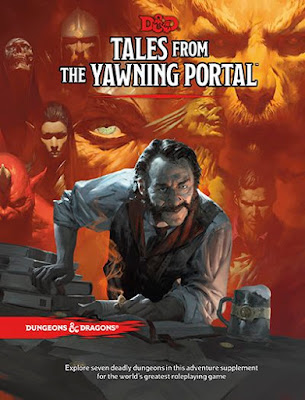 Just the other day, I read Teos Abadia's post (Alphastream.org) about "classic" D&D adventures... and then just today, Wizards of the Coast announces Tales from the Yawning Portal, a hardback full to classic adventures translated for 5th Edition (talk about happy coincidence).

When I read this list, I have to admit I have mixed feelings about some of the titles.

One of the first things that struck me is that the title of the book strongly suggests Undermountain since the Yawning Portal is the "publicly known" entrance through a tavern in Waterdeep... but there are no Undermountain related adventures contained within (AFAICT). The theme of the book, however, is very dungeon-crawl heavy and that may be why they named it thus.

My hope is that they would not only update the monster and skill stats for 5e, but also smooth out the rough edges and re-write parts of the adventures with a more modern adventure design... but I have doubts that it will be more than just a polished presentation. I have a feeling this remastered "greatest hits" album may disappoint some who would like more than just a re-skin.

Against the Giants - While this is a solid "classic", it's a bit of an odd selection for the book given that we just got Storm King's Thunder as an adventure path. Given that, I might have selected a different adventure set, such as D1-2-3... However, it has been a fan favorite for decades, so I suppose one can't argue much about that. I guess the name recognition of this one in the mass market is important for Wizards. There is already a fan conversion available on DM's Guild.

Dead In Thay - This was already available as a DM's Guild PDF with "D&D Next" (5th edition play test) stats included. I guess it's a bit of a no-brainer on the part of Wizards of the Coast since they just need to edit the stat blocks to match the final release. Since it is 6th to 8th level, it represents a decent mid-tier adventure, but it seems a little odd they would include this adventure and not Scourge of the Sword Coast which was introduction to this story line.

Sunless Citadel - I've never played this adventure, but heard much about it over the years. Bruce Cordell is well known for his adventure design and Meepo the kobold is infamous. As a 1st level adventure, this looks to be an excellent pick for introductory groups as well as a good alternative to Phandelver for starting a new campaign.

Forge of Fury - While I don't know much about this title, it's a 3rd level adventure with a black dragon. While it's a bit of a dungeon crawl, it's not as vast as other well know ones. Originally, this was a loosely connected follow-up to Sunless Citadel  (but can stand alone). It was authored by Richard Baker who is well known among game designers. This looks like another solid pick.

Hidden Shrine of Tamoachan - Coming in at 5th to 7th level, it is considered one of the classics, and a decent pick for a mid-tier adventure. I might have chosen differently, but it's all subjective and YMMV. Note: This adventure was somewhat re-written for 4th Edition D&D. I expect the new version will retain some of the updated design and flow of the more recent rewrite.

White Plume Mountain - While I own one of the early printings with the Dee and Willingham artwork, this is another module that is a classic more for nostalgia than actually being a good adventure. I mean, it's basically a plotless dungeon crawl. There are a bunch of monsters in a big labyrinth for no other reason than "A wizard did it!"... but people just love Whelm, Wave, and Stormbringer Black Razor.

Tomb of Horrors - People seem to love this module, but I'm just not sure why. It's really just a way to dick over your players and turn a good group into a disgruntled mob. This is passive-aggressive way to make players quit your game. It was redone for 3rd edition, 4th edition and now 5th edition... but you really don't want to run this unless your players have a really good idea what to expect. Just say no.

Very early on, I advocated that Wizards of the Coast translate some of the early D&D adventures and bring them up to 5th Edition.  I'm glad they have listened to their fan community (I know I wasn't the only one). I think they may have leaned a little too much on nostalgia for some of the picks. I may have preferred a few different ones, such at Village of Hommlet (just the original, not the "super module"), Against the Cult of the Reptile God, Secret of Bone Hill, or Saltmarsh perhaps (many of which already have fan-created conversions).

Or even some of the shorter one or two session adventures from the likes of Dungeon Magazine in the early days. It would be fantastic to see a "Best of Dungeon" updated for 5th Edition. @MikeMearls - make it happen!

Posted by Raging Owlbear at 4:17 PM