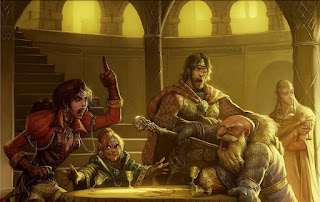 So in my recent posts about “Railroading” and “Session 0”, I’ve talked a lot about expectations at the table, and how it is important for everyone to want the same (or at least similar) things out of the game to make sure everyone is having fun.  Implied in that statement is an idea that has gone around gaming circles for many years -- the “social contract”.

What is the social contract?


The idea of the social contract is that there is an unspoken agreement at the table that everyone is there to have fun and no one player or GM should act in such a way as to harm the fun of another player.

That’s the summary version, but there is a little more elaboration related to RPGs. We all play D&D (and similar games) as an escape from the day to day stresses. We have enough problems and personal conflict in the real world to have to come to a game only to face the same personal conflicts or stresses we’d like to put aside on a Friday or Saturday night. If it’s not fun, people will quit the game.

There are some baseline rules which apply to nearly every game out there.

1) Don’t f*ck with other player’s characters.

This is a fairly broad rule, but what it essentially boils down to is -- players shouldn't do things like cast charm on others, steal from their inventory, harm another character on purpose, or do the kinds of in-game shenanigans that would annoy or possibly anger another player (or the GM). Killing another PC is almost always verboten (in most games).

Now, if you and another player are close friends and poke fun at one another in game through your roleplay, that’s acceptable… But, you need to be absolutely certain that your actions are actually entertaining to the other player, and not actually annoying them (or the other players, for that matter). I’ve heard many people say “But, I was just joking” or “it was all in good fun” after someone gets upset. What might be fun for you may actually be pissing someone else off. However, because most people by nature are conflict-avoiders, they sit quietly until they blow a gasket.

Don’t be that guy (or gal) that pisses others off. Make sure your “kidding around” is welcome. And, in turn, if you are getting irritated, talk to the player and GM outside of the session and let them know you are bothered by the other player’s actions. People are usually capable of being mature about these things given the chance.

And definitely don’t be the guy making sleazy in-game remarks to women at the table. Just don’t do that. I shouldn’t have to explain why.

As a corollary, it’s perfectly fine to f*ck with the other PCs if that is the primary goal of the game. There are many games where the fun is precisely about betrayal, backstabbing, and general shenanigans.

PARANOIA is a perfect example of this. The point is to betray, backstab, and set other characters up for execution by The Computer. That is the fun, the whole fun, and nothing but the fun. But that’s also explained as part of the expectations within the premise. PARANOIA is non-cooperative. Most D&D-esque RPGs, by contrast, are cooperative in nature, not competitive. These things are established in Session 0 when the GM goes over the premise of the game or campaign. You shouldn’t mess with the other characters unless that is what the game is about.

Oh, jeez. If I have to hear this one more time… This almost always goes hand-in-hand with #1 above. This defense is usually trotted out when the player does something stupid or annoying that pisses off one (or all) of the other players at the table. 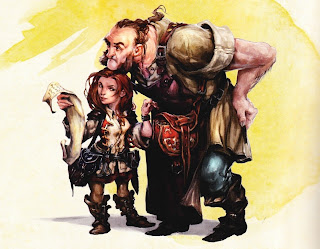 As noted, D&D and its ilk are cooperative RPGs. In that vein, don’t have your character perform some action that is completely counter to the goals of the party, or otherwise upsets the plan of action. If there is a negotiation going on in the throne room, and you might be a bit bored so you announce, “I attack the King,” or something else equally stupid, you deserve to be kicked out of the game. Don’t be that guy.

Don’t build a character concept that actively works against the rest of the party, places the group in unnecessary jeopardy, or has no common sense, and then tell the others at the table you are playing “in character”. Their “in-character” action will be to kick you out of the party, let you be executed by the authorities, and then say “buh-bye” as you are never invited back to play the game.

I wrote in my last article about rails and sandboxes, that the GM lays out several plot hook options for the players to examine, and select the one that appeals most. The GM usually has a fair amount of prep work in order to build an entertaining evening of buckling swashes and slashing hacks.

Take the bait. The hooks are there for a reason. Don’t look at the various adventuring opportunities and just say, “No, we’re not going to do that… We’re going to go in a completely unexpected direction, just because.”

Now, there is a certain amount of flex in this rule. If you are playing an open world sandbox, and your GM is the kind that improvises at the drop of a hat, and wants you to wander wildly in unexpected directions, then that’s awesome. But that has to be within the expectations set at the beginning of the campaign.

Many GM’s don’t expect the players actively thwart the potential plot hooks, and the GM’s fun is important too. They put a lot of work into building a game world to explore. Purposefully pointing at the completely blank part of the map and saying “We’re going here” can be a pretty annoying player trait for the GM who relies on preparation.

If the game has too many rails, or if the game is too wide open and you desire more direction, then have that discussion outside of the session with the GM. Don’t passive-aggressively make it hard for your GM to run an adventure. You’re being a jerk, and they will find another group, and you will be out of a game. If you want the game play to adjust one way or another, discuss it like adults outside of the game.

This is a pretty obvious one. Pay attention. Don’t get distracted or be the distraction. Put your phone away. Know when your turn is coming and plan what to do while you are waiting for others. Help the GM keep the game moving. Be aware of when you are violating this obvious social norm.

5) As the GM, be the benevolent overlord.

There are books more that can be written on this topic, but I will try so summarize the primary points specific to the social contract.

Because you are the GM, you will be seen as the defacto “CEO” (and Human Resources) at the table. If there’s a problem at the table, it's now your problem regardless of whose fault it is. Talk about it with the players involved outside of the session in a non-confrontational way. You need to be as fair and impartial as possible. It may be your friend that is causing the problem (or it could even be you). If they are truly your friend, they can take gentle feedback without rage-quitting. We are all adults [mostly]. Let’s make the game experience as fun and stress-free for everyone.

The fact that you are reading GM advice means you are already working toward improving your craft, and that’s awesome. Be prepared. Understand player agency. Limit the PC actions as little as possible. Let them drive the plot. Don’t punish them in-game because they didn’t do what was expected. It’s not just your story, but shared by everyone at the table… And keep reading GM advice (but don’t believe everything you read… unless you read it here).  :)


As with a number of my advice articles, almost all good games result from a set of shared expectations. These issues almost inevitably arise when the players and/or the GM are expecting a much different game than what it being played at the table. Discuss those expectations, whether during “Session 0” or at any time when things don’t seem to be clicking quite right during the campaign. When everyone is on the same page, the game will go so much smoother.

Have other suggestions for "must-have" rules in the social contract? Post them in the comments!
Posted by Raging Owlbear at 12:01 PM