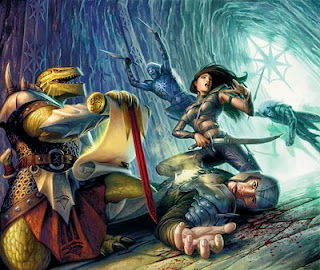 For many who have played D&D over multiple editions, especially those from the TSR days, the rate of healing and recovery in 5th Edition may seem a bit fast. PCs come into every fight feeling fresh and energetic, which is a bit counter to the old school play style.

I wanted to be a healing and death to be a little more gritty than standard 5th Edition. I also wanted falling unconscious to be more dangerous and the possibility of instant death more likely. My desire was to removes some of the pop-tart effect of constantly letting the fighters drop to 0 hit points only to spring back up 6 seconds later. The healers should be doing their jobs before the front line falls unconscious.

When considering the changes, I thought the 7-day long rest variant as outlined in the Dungeon Master's Guide was overdoing it. While want healing magic to become a more important resource to be managed, I did not wish to alter other long rest recharge powers. In that vein, I wrote up a slower healing variant for B/X-5, my own home brew homage to Old School D&D. I think this modification strikes a balance between seemingly fast default healing and  overly slow variants I've seen. Healing works essentially the same as in 5th Edition with some minor changes highlighted below.

Whenever you are reduced to half of your total hit points, you become Bloodied.  At the end of any combat where you have been bloodied, you roll to find out if you suffer a Temporary Injury. [Design Note: The Temporary Injury list is still under development. A TI will mend naturally over several rests, or through casting of a Lesser Restoration.]

When you drop to 0 hit points, you either die outright or fall unconscious, as explained in the following sections. You may be subject to a Chronic Injury. [Design Note: The Chronic Injury list is still under development. A CI may mend naturally over several weeks, or through casting of  Greater Restoration or Lesser Restoration at a higher level spell slot.]

If damage reduces you to 0 hit points and fails to kill you, you fall unconscious. This unconsciousness ends if you regain any hit points. On the following turn, you must start your Death Saving Throws.

Whenever you start your turn with 0 hit points, you must make a special saving throw, called a death saving throw, to determine whether you creep closer to death or hang onto life. If you have already fallen unconscious since your last long rest, you start with a number of failed death saves equal to the number of times you have already dropped to zero hit points since your last long rest.

Roll a d20 and add your Constitution modifier. Proficiency is not added to this roll. If the roll is 15 or higher, you succeed. Otherwise, you fail. A success or failure has no effect by itself. On your third success, you become stable. On your third failure, you die. The successes and failures don't need to be consecutive; keep track of both until you collect three of a kind. Rolling 1 or 20. When you make a death saving throw and roll a 1 on the d20, it counts as two failures. If you roll a 20 on the d20, you regain 1 hit point.

[Design Note: While the target DC is higher, melee fighters will be helped a little by the Constitution modifier. Currently, CON save proficient characters do not gain the additional benefit.]

Damage at 0 Hit Points. If you take any damage while you have 0 hit points, you suffer a death saving throw failure. If the damage is from a critical hit, you suffer two failures instead. If the damage equals or exceeds 1/2 the PC's hit point maximum, the PC suffers instant death.

For example, Fy-Tor is has 10 remaining of his hit point maximum of 18. He is hit for 12 points of damage and falls unconscious. In the same round, Clara Cleric heals Fy-Tor for 8 hit points, so he can continue fighting. Fy-Tor was healed before his turn came up, so he did not have to roll a death saving throw. On a successive round, Fy-Tor is again hit for 10 point of damage and fall unconscious again. He immediately receives one (1) failed death save for being reduced to 0 a second time, so he is already in dire straits. Clara heals Fy-Tor again, but if he drops to 0 hit points for a 3rd time, he will start his death saving throws with two (2) failures! If Fy-Tor drops to 0 hit point a 4 times between long rests, he dies instantly.

Massive damage can kill you instantly. When damage reduces a PC to 0 hit points and there is damage remaining, you die if the remaining damage equals or exceeds half your hit point maximum. A PC will also die instantly if she falls to 0 hit points 4 times between long rests, due to accumulated death save failures.

For example, Clara Cleric currently has 8 hit points left of her maximum of 12 hit points. If she takes 16 damage from an attack, she is reduced to 0 hit points, but 8 damage remains. Because the remaining damage (8) is equal or greater than  half her hit point maximum (6), the Clara dies instantly.

The best way to save a creature with 0 hit points is to heal it. If healing is unavailable, the creature can at least be stabilized so that it isn't killed by a failed death saving throw. You can use an action to administer first aid using a healer's kit to an unconscious creature and attempt to stabilize it, which requires a successful DC 10 Wisdom (Medicine) check. If a healer's kit is not available, a successful DC 10 Wisdom (Medicine) will only add one success to a PC's death saves. This check may be performed by more than one PC in a single round.


After a day or exploration and combat, adventurers need time to rest in order to eat, sleep, tend their wounds, refresh their spirits, and prepare for further adventure. Adventurers can take short rests in the midst of an adventuring day and a long rest to end the day.

A short rest is a period of downtime, at least 1 hour long, during which a character does nothing more strenuous than eating, drinking, reading, and tending to wounds.

A long rest is a period of extended downtime, at least 8 hours long, during which a character sleeps or performs light activity: reading, talking, eating, or standing watch for no more than 2 hours. If the rest is interrupted by any period of strenuous activity— combat, casting spells, or similar adventuring activities (aside from studying, praying or other quiet contemplation) — the characters must begin the rest again to gain any benefit from it. A character can't benefit from more than one long rest in a 24-hour period, and a character must have at least 1 hit point at the start of the rest to gain its benefits.

At the end of a long rest, a character regains lost Hit Points equal to  2 x Level + Constitution Modifier (minimum 1). The character also regains spent Hit Dice, up to a number of dice equal to half of the character's total number of Hit Dice (minimum 1), and may spend any number of their remaining Hit Dice to regain more hit points. Additionally, any failed death saves from previous encounters are erased.

As 5th edition stand now, healing a PC before they drop unconscious is considered a "wasted action". With this variant, this is no longer the case, since dropping to 0 hit points more than once is significantly more dangerous for the melee PCs.  With these alterations, healing becomes a more important resource, combat becomes more tense, and dropping to zero hit points can be a deadly experience.
Posted by Raging Owlbear at 12:43 PM