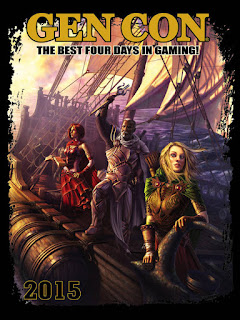 This will be the last Gen Con I will attend.

Earlier this year, I was ecstatic when my wife gifted me a trip to Gen Con 2015 (a pretty big deal since it will mean she's home alone with 2 toddlers and a 4 y.o.). I anxiously awaited badge registration, arranged flights well in advance and bought my badge on day 1 of registration.

But then, there was the housing fiasco. People were randomly assigned to a wait time in the queue between 0 to roughly 3 hours before they could register for housing, That's understandable. You can't process thousands upon thousands of room requests at once, so the only fair way is to let a limited number of people in at a time,

So that's a major foul up, but there are thousands of rooms in Downtown Indy so almost everyone should be able to get a good room, right?

The Color of Money


Well... As it turns out, while Gen Con does get a a fair sized housing block, the downtown hotels hold back a lot of their inventory for themselves. The Gen Con block sold out within about the first hour, and yet there was plenty of downtown availability outside of the housing block if you were willing to pay $600 - $800 per night.

Yep, hotel rooms that generally go for around $150 to $200 were priced 4 times higher (or more!) than usual during Gen Con if you reserved outside of the block (inside block pricing is about $180 - $250 per night depending upon how nice the hotel is). They know that gamers desperate enough to be near the convention center will pay ridiculous amounts.

No, I get Capitalism. Supply. Demand... but there's also price gouging. Gen Con needs to flex a little bit more of its economic muscle. It brings millions upon million of dollar into Indianapolis. It's time for them to tell the Indy Chamber of Commerce there that if the hotels keep f@#%ing over Gen Con attendees, they will move elsewhere... If Indy won't work with Gen Con to bring an affordable convention experience for the majority of attendees, then f@#% Indianapolis,

...which brings me to my next point.

Time for a Change


It's time for Gen Con to move elsewhere. Indianapolis added a whole bunch of downtown room inventory because it couldn't handle the Gen Con crowds in prior years, and we're now back in the exact same place... Except the inventory is there to handle many of the attendees, but the hotels are holding that inventory back for their ethically shady greed.

Also, while the Indianapolis Convention Center is huge, but Gen Con's numbers are starting to make it bulge at the seams.We will see how it holds up to this year given that D&D 5th Edition appears to be the most popular version since WotC acquired TSR (and potentially the most popular version ever). Between Wizards of the Coast, Paizo, Fantasy Flight and record sales in the board game industry in general, this year's crowd will likely not just break attendance records as with the last several years, but shatter them so completely that prior years will pale in comparison. I'm estimating well over 60,000 attendees, if not 70,000 or more.

I won't even get into the shuttle service to the outlying hotels. Let's just say their shuttle solution sucks. You can only take it once per day each way and you need to pre-reserve your ride times in advance. How the f@#% will I know what time I'm going to want a ride back from the convention center each day several months in advance?

Gen Con needs a convention site where most attendees can stay within several blocks of the site, or if not there needs to be extensive available public transportation (such as Washington DC's MetroRail) to hotels more distant from the convention center.

For me personally, I see Gen Con as a victim of its own success. Given that these problems are just going to get worse in future years (the Indianapolis contract goes to 2020), I don't see myself returning anytime soon, if ever.

Luckily, I did chance into a downtown room as everyone cancelled rooms due to cancellation fee hike just this past week.  However, in order to get that room, I had to check back every day over the last week several times per day on the off-chance that someone cancelled just minutes before I did my housing search... and I'm competing against hundred of others doing the same.

I was one of the lucky ones. There are still a number of people begging for downtown rooms in the community forums. I also had to renege on an agreement to room with a group of people staying about 2 miles away (I'm so sorry again, Noah), but being my last time at Gen Con, I just had to take the downtown room opportunity.

Anyway, I'm sure I'll have a good time at this year's convention. But between the cost, the crowds, the unlikely chance that any logistics will get any better given the convention's astronomical growth, it'll be a long time before I attend any Gen Con again.

Posted by Raging Owlbear at 5:04 PM