Not Loving Friend Computer is Treason - A Paranoia Love Story 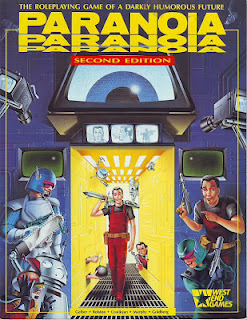 I awake to the blaring klaxon of Morning Comforts in my ear. I've gotten pretty good at springing out of bed even when still half-asleep because the Pleasant-Shake-Awake-Bunk sometimes malfunctions and sends several hundred volts through the frame. I reported the not-problem with the bed to Housing Preservation Development and Mind Control (HPD&MC). The repair bot Tech Services sent 4 week-cycles later made some minor "fixes". It didn't have a mouth, but I swear it was smirking at me with its speaker when it reported all was working fine. The jolts seem to be even more frequent now, but disconnecting the power might be seen as an act of vandalism against Computer-issued equipment, so I've learned to sleep lightly.

A second klaxon breaks my reverie and I begin Morning Comforts whilst loudly singing "The Computer is my Shepherd" with my pod-mates. I've always wondered about the song. I'm not quite sure what a "sheep" is, but when I asked, I was warned that information was above my Security Clearance. I am only a Red Troubleshooter, after all. We don't get told nothing, except where trouble is and how to shoot it. 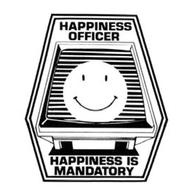 The third klaxon sounds and we change our tune to "Happiness Is Mandatory!" before heading to the commissary for Algaefast. My daily Happy Pill looked a bit discolored this morning. It's usually just Red, but this one had a mix of Green and Blue metallic speckles. I reported this to Friend Computer and was reminded that my clearance only allows for the ingestion of Red pills. Also that not taking my daily Happy Pill is regarded as Suspicious Behavior. When I was asked if I required a Med-Bot for assistance with the pill, I quickly declined. The last time a Med Bot dispensed pills to me, it was not into my mouth. I could swear it was smirking too. I reluctantly swallowed the pill. I don’t think I feel any different...

I hope I get promoted to Yellow soon. I'm pretty good at rooting out trouble and shooting it. I get a tingle in my head when someone seems to be lying to me. It's almost like I can "see" what they're really thinking. I once told this to my pal, NEIL-Y-GON-6. He got a funny look and seemed to whisper "Mutant!" under his breath... Actually, I'm not sure he said anything at all. I think I heard his brain talking.

Anyway, later that day he got run over by a Safe-Drive-Bus bot after stepping out of a Confession Booth. Safe-Drive bots don't usually drive on the pedestrian walk ways, but the Nightcycle News reported no robotic malfunctions that day-cycle, so NEIL must have been in an no walk zone. Yes, that must be it. It has nothing to do with the note I received that read "You are protected -- Psion". I felt the best way to dispose of the note was to eat it. No need to litter the inside of a Trash-Bot receptacle.

After a brain-piercing high-pitch shriek, my Red-Tooth Ear Bud notifies me that I must report to Power Services for a Troubleshooter Mission Briefing. So much for Algaefast. I guess there will be no Hot Fun! to eat today. Good thing I stashed some Algae-Crisps in my boots.

In the briefing, a bored-looking Green officer starts to give us mission details. Her boredom is a facade. It is obvious to me she is extremely nervous and shifty, but my Troubleshooter teammates appear unaware. ALLIE-G-GON-4 informs us we need to report to Production, Logistics, and Commissary (PLC) for some special equipment and Power Services for a Screw-Bot. She then places a massive stack of requisition forms on the desk. Our missions is to change a lightbulb in the DOA sector. I quietly release the safety switch on my laser. It's going to be a hard day-cycle.

What more could a clone want?!?

PARANOIA is the greatest game in the history of role-playing games.

No… Wait... Strike that. PARANOIA is the greatest game in the history of ALL games! Friend Computer tells us so, and therefore it must be True, Right, and Correct.

Playing any other game is treason and punishable by summary termination.

PARANOIA is a dystopian, dark future role playing game set in Alpha Complex, a post-apocalyptic underground mega-city controlled by The Computer, an all knowing (not really), all seeing (well, mostly not) and wildly insane, paranoid Artificial Intelligence. The Computer's primary function is to protect its citizenry of Alpha Complex from Communists, Mutants and Traitors. However, almost all of its citizens are mutants, traitors and often Communist (or at least a member of some other subversive Secret Society). The game is cross between 1984, Brazil, THX-1138, Brave New World and Monty Python's Flying Circus.

The players role play Troubleshooters, a team of expendables specialists sent to investigate any odd happenings in Alpha Complex. The Troubleshooter's job is to accomplish their mission goals whilst rooting out treasonous activities and hopefully survive the day. Life is cheap in Alpha Complex and players are given 6 "clones" for their character, allowing them to die up to 6 times before having to create a new PC. The game encourages players to betray one another by discovering (or inventing) the subversive activities of their fellow team mates and reporting back those treasonous actions back to Friend Computer. At the same time, they are instructed by their Secret Societies on how they should sabotage the mission... However, mission failure can often lead to summary execution. It's a classic Catch-22. You are eventually screwed no matter what you do.

In a way, it's like playing an RPG version of The Resistance, except that everyone is the spy... but for different spy teams.

The beauty of PARANOIA is that it can be played with a straight, dark and bleak Kafka-esque dystopian tone, or dialed up to Monty Python levels of silly. The sweet spot is somewhere in between, where the players know they are constantly screwed and will likely die a horrible, meaningless death, but at the very least it will likely be entertainingly humorous.

However, what's best about PARANOIA is that the rules don't matter. Before there was the term "story stick" game, PARANOIA was there. The true play happens when the players bluff one another, bluff the GM, bluff the The Computer, lie, cheat, steal, bootlick their way out of instant death. Almost all of the game is played by fast talking... and I'm not talking about Diplomacy rolls. The players have to think fast on their feet regardless of the Chutzpah score of the character. Dice rolling is an afterthought when the inevitable breakdown occurs and a PC knows he is about to die and by golly, he's not going down without a fight.

This is what grabbed me from the first moment I laid eyes on the rules (and displaying knowledge of said rules is a treasonous offense). The numbers mean basically nothing. It's all about your story - your secret society, mutant power and motivation not to be killed (too quickly).

It's not that I like lying to, betraying and backstabbing my friends (ok, maybe I do a little), but the lure is more about thinking on your feet when the pressure is on and lying so damn well that the other players just look dumbfounded... or even better, one of them begins an 80's movie slow-clap. That is the moment you have acheived role playing Nirvana... and then you are executed anyway. Send in the clones.

The PARANOIA 2nd Edition from West End Games is considered the "Classic" version of the game, especially the earlier "pre-crash" supplements (before the game started really going off the rails). The Mongoose revision originally titled PARANOIA XP is also a very well executed version of the game. They re-released another minor revision simply titled PARANOIA after Microsoft complained and they are currently working on another release after a very successful Kickstarter.

There is no PARANOIA Fifth Edition. Any knowledge or discussion of a so-called "Fifth Edition" is grounds for immediate termination.

Stay alert. Trust no one. Keep your laser handy.

And for Pete-R-SNT's sake, go play this game RIGHT NOW!

It will change your life (or abruptly end it).

This article is a part of a cross-blog posting project about the love of RPGs started by +Charles Akins at Dyvers. Other posts in this series: