I've just started my players into A Great Upheaval, the first chapter (free from Wizards of the Coast) in Storm King's Thunder adventure path . In a prior article, I've already noted some of the adventure design mis-steps that I've come across just in the reading, but a few other minor foibles have been revealed while running the opening chapter in the village of Nightstone.

So here are just a few small tips for DM's to make it run a little smoother.

Some spoilers follow, so if you are planning to play in a Storm King's Thunder campaign, you should stop reading now. For my own players, you can read this after our early January sessions.

As you know, Nightstone is currently bring plundered by goblins. Since this is a low-level introduction to SKT, the goblins are generally encountered in ones and twos... with a few small combats that may involve more than 3 foes.

The difficulty is, that in a small town, the sound of combat would travel and multitudes would quickly join the fray overwhelming the low level party and leading to a TPK. To get around this, the designers decided to put a church bell tower being constantly rung by mischievous goblins (possibly inspired by Kelly's Heroes). This allows the characters to skulk around town without being heard.

But there's one problem... The church is the first freakin' building the PCs find just inside the gatehouse!

At first I didn't notice this, but as soon as my party entered Nightstone, they bee-lined to the church. Granted, they had to kill the Wargs first, but basically, they met the church goblins immediately and the bells were silenced. This basically screws up almost every other encounter on the map. The town is only about 100 yards long (give or take) and sound is going to travel. If you play the monsters with even low intelligence, they are still going to notice something is different... and even if they ignore the quiet bells, they will be able to hear combat disturbances (and cries for help) anywhere in town.

So, do yourself the first favor by putting the church at the far end of town from the gates. The PCs will have to move through town slowly and will encounter the goblins organically in smaller groups. Technically, you could still run it as written without the bells... but that always bothers me as a DM and feels artificial. If the PCs decide to quiet the bells first, then they should be prepared to fight the full force on invaders.

Second, as written, most of goblin encounters devolve almost immediately into combat. You might want to give your players some other options. Indicate that certain goblins appear to be acting cowardly and might be easily intimidated... especially if the blood of their peers is dripping off the party's weapons.

Goblins are out for themselves. Some of them might be happy to impart information to the PCs just to be able to walk away from town with their sack of loot. Play up the silliness of the pumpkin headed tag game. Make a point that the goblins appear just to be taking advantage of an empty town and are otherwise not desiring confrontation (except for perhaps a few...).

The other issue I ran into was one of my own making. My group was already knocking on the door of 5th level. I had to think of a way to scale up the adventure, without taking away the whimsy of some of the goblin encounters.

I knew many of the obstacles in this town were going to be more annoyances than hard fights. After all, it's really just meant to set up the goblin caves and the giant encounters in the later chapters. Instead of using a party of invading orcs in the latter part of the Nightstone adventure, I've decided to use Hobgoblins instead, with a few of them accompanying the goblins as overseers to scout the town before the larger force arrives.

I tried to maintain a few of the sillier encounters, like Gumgum trying to escape out of the back of the kitchen with a huge sack of food and the goblins playing pumpkin tag, but had to re-write, or trash a number of the other encounters in order to not make it a game of kill-the-next-goblin-in-line.

Here are a few ideas for scaling:

1) More worgs. This is almost too obvious, but make the first group of worgs at least four or five. Don't have them rush the characters directly, especially if there is missile fire. Since they are semi-intelligent, they will circle buildings to flank foes. You may also want to give the Pack Tactics like wolves have to make them a little scarier as well as buff the hit points a little. In addition to the ones in the town square, consider adding a couple more in another part of the village along with their hobgoblin beast master (perhaps a sub-boss). 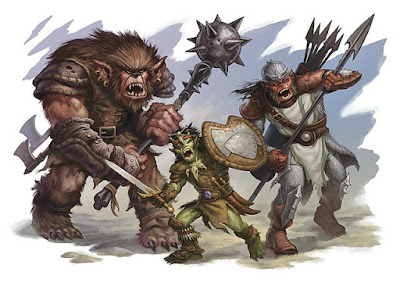 2) More goblins. Another somewhat obvious tip. Double the numbers where it makes sense, or add hobgoblin overseers in locations where they would take the most interest in the village (the barn, the trading post, down near the keep bridge).

3) Plan where the foes will move. With the hobgoblins in the scouting party, they will likely react in a more disciplined manner once a real fight starts. Since my players had silenced the bells and dispatched the first group of goblins and hobgoblins near the church, inn, and stables, the remaining soldiers gathered their goblin allies and snuck around the outside wall to the gatehouse to ensure they could control the entrance for their coming allies. This meant some of the encounters in the south part of town will not occur, but that's fine. When the PCs emerged from the trading post, they detected the group at the gates and killed them. However, in the process they set fire to one of the gate houses... which means the drawbridge will stay down for the arriving hobgoblin reinforcements.

4) Beef up reinforcements. The hobgoblins are looking to occupy the town, so their make up should reflect that. Add commanders, archers, hobgoblin and goblin infantry... Perhaps even an ogre ally. This will be the big fight and the PCs should have to enlist the aid of the Zhents, or it will go south.

5) Dangerous caves. Everything you do in the village should be doubly-so in the cave complex. Hobgoblin leaders, worg packs, goblin minions and ogres. I'm likely to make it a little less dungeon crawl and more like a single big fight (in waves of small skirmish groups) so we can put this chapter to rest more quickly and move on to bigger foes. One could even consider adding an ousted Hill Giant from Grudd Haug instead of ogres (one could even tie in Fee, Fly, Foe, Fund).

Posted by Raging Owlbear at 8:00 AM