The Problem with Star Wars

I've been thinking a lot about Star Wars this week… and about the “controversy” around The Last Jedi.

First, let’s get this out of the way: we're a bunch of nerds arguing about a movie series. This is the very definition of “first world problem” and none of this really matters. Second, it’s OK to dislike TLJ, just as it is OK to love it. Third, I didn't hate The Last Jedi, but I didn't love it either… and that's what everyone is talking about, so I might as well too. 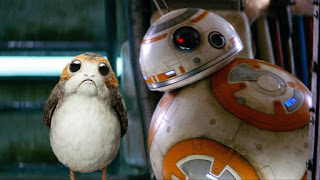 Here’s my thesis about the problem with the new Star Wars trilogy: it needed a “show runner”. Bear with me as I lay out my case.

The prequels (Ep I - III) have a better story. They are not good movies, but they have an amazing plot. If George had let others (like Kasden) craft the scripts and dialogue, and there had been better acting, they could have been amazing. The story was there, but poorly executed. I also posit that their importance is because of Palpatine’s story, not Vader’s. Anakin was a patsy. Palpatine was one bad-ass motherf@#%$!... But I'm straying off-point.

The point is that Lucas had a vision of the Machiavellian machinations which would lead a Senator of a back water planet to become Emperor of the Galaxy. Palpatine was playing a literal long game. Encouraging a civil war. Setting up the clones. Making his planet a victim so he could rise from obscurity. This shit had layers upon layers. It was an amazing idea ruined by terrible scripts… But the idea was there. A single over-arcing plot to tie the 3 movies together (even if it was poorly executed).


The problem with the new trilogy is that it doesn't have any of that. There are 3 separate movies being made with no single visionary at the helm. Each movie is a different set of script writers, and different directors, which all have different visions of what Star Wars is, with no pre-planned plot to pull together the movies. There was no single (or collaborative) voice to be the advocate for a central vision. (The only reason Abrams is coming back for IX is that Disney fired the other dude. J.J. had no plans to be involved this far. It was supposed to be one and done for him). So, in essence, we were being given 3 separate movies with a veneer of “trilogy” in the same way Jaws was a trilogy… You know, because they all had a shark.

Rian basically threw out all of the set ups Abrams created. I didn't have [much of] a problem with that because I felt The Force Awakens was too much of a retread of Star Wars (it was not called “A New Hope” when I saw it in theaters). But Rian’s throw aways illustrate the problem. There are no ties that bind the movies together when one filmmaker can just disregard what the other(s) have laid out. Don't like Snoke? F@ck ‘im. Mysterious protagonist origin story? Nah, screw that. Awkward love story between 2 characters that have known each other for only several hours? No, let’s make it an awkward love triangle instead.

Don't get me wrong. I actually liked a lot of what Rian did in TLJ. I like a flawed Luke, broken by his former hubris. I thought Snoke was Diet Crystal Palpatine. Good riddance. Rose rocks (although the love story is a totally forced… I mean, she was kicking Finn’s ass for being a deserter just a few hours before). Laura Dern brought gravitas in spades, and Kylo Ren is as complex of a character that has existed in any Star Wars.

But Abrams could throw all that in the waste bin, too. Rey could suddenly go from being a nobody to one of the lost Kenobi quintuplets. Snoke could be revealed as a Midichlorian-infused Jango Fett clone when his Force-wielding “brother” shows up. Maz Kanata could become a useful character instead of an awkward segue between story beats.

In IX, J.J. could choose to undo every decision made by Rian because there is no unifying thread for the trilogy. It's at the whim and mercy of whomever comes next. A trilogy is not just having the same characters in 3 disparate stories.

That's likely the core of the discontent with the new movie. I don't blame Rian. He got saddled with Abrams garbage and chose to take out the trash instead of slogging through, and probably ended up with a better movie as a result. But that doesn't leave the audience feeling any less betrayed for being catfished by the discarded teases.

When you boil it down, a novel trilogy isn't written by 3 different authors with differing visions. A Star Wars trilogy should not be either… But that's where we are now.

Posted by Raging Owlbear at 1:21 AM