The Bone Swarm Skeleton is a hulking skeletal beast that is made up from multiple skeletons, both humanoid and animal. While it is still a medium size creature, it is larger than a typical humanoid and may stand upright or skitter around on multiple legs. When destroyed, its bits and pieces reform into small animated undead swarms that continue to fight like a skeletal version of the Terminator. 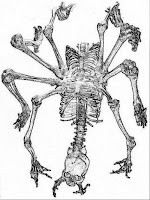 Bone Swarm. When damage reduces the skeleton to 0 hit points, it falls to the ground in a pile of bones. On the round following its demise, the skeletal piles form into 4 small animated bone swarms (see stats below) in any spaces where the skeleton died.
Actions 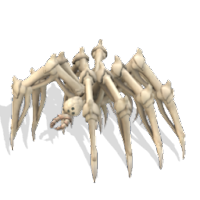 Posted by Raging Owlbear at 1:24 AM