Update 10/14/15: Jim Ward has had some more complications and is back in the hospital. His social media posts have been amazingly upbeat, but he is having some serious medical issues, so please keep Jim in your thoughts and prayers. Tom Wham is doing better and, according to some Facebook posts, is back home recovering.

Just a quick post to note that both Jim Ward and Tom Wham are recovering from their respective medical issues, so please keep them in your thoughts (and prayers if your philosophies are non-secular). For those who may not recognize the names, Jim and Tom were both well known game designers during the early TSR years. 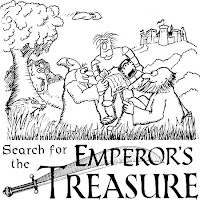 Tom Wham was a game designer and artist at TSR during the AD&D years, but you probably know him from many of the small games he published as part of the Dragon Magazine "centerfold". He is responsible for Snit's Revenge, The Search for the Emperor's Treasure, and most famously The Awful Green Things From Outer Space. He also did a fair amount of the comic art work in the AD&D Monster Manual and Dungeon Master's Guide.

If you want to support Tom, you can still buy Awful Green Things from Steve Jackson or some of his independently printed games directly from him (since he's been in the hospital recently, he may not be able to fulfill your order right away). 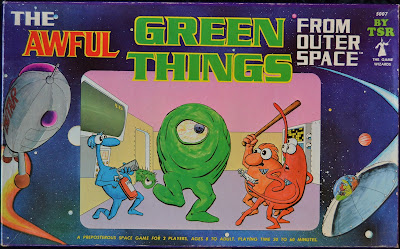 Tom Wham games were very much a part of my formative gaming years. Search for the Emperor's Treasure was one of the first "bonus" games I received as part of my Dragon Magazine subscription (issue #51) and I still have most, if not all, of the hand cut card stock paper chits (as well as the reprint contained within the "Best of the Dragon Games" box.

Tom, if you read this, thank you for those... especially Awful Green Things, which I played the s#!t out of (and which I also still have in the original TSR box)! When my kids are old enough, I can't wait to introduce them to all of the "Best of Dragon" games of yours I've collected through the years.

Jim Ward was a major part of the development of AD&D (Deities and Demigods, Greyhawk Adventures, etc) as well as writing Metamorphosis Alpha, Gamma World and a number of other TSR titles. He was Drawmij the wizard in Gary Gygax's original D&D games.

Jim also recently encountered some medical problems and his friends have set up a Go Fund Me page to help with his medical bills. You can also support him by purchasing some of his games. A revised edition of Metamorphosis Alpha is back in print at Goodman Games. 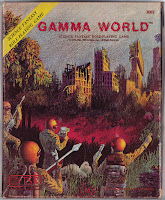 On a personal note, Jim also had major influence on me. Gamma World was one of my group's go-to games after D&D when were were wee lads. I think we may have played it almost as often. My copy of Deities and Demigods (with Melnibonean and Cthulhu myths) also still resides in a place of honor on my game shelf.

I recently came across a kind of Gamma World "fan fiction" (before that was a thing) that I wrote in 6th grade (circa 1982, I think) that was so amazingly hilarious (unintentionally, it was supposed to be a "serious" short story for my English class) that I will need to re-type it and email to Jim someday soon. I have no doubt it will provide a guffaw.

So thank you both, Tom and Jim, for giving me so many amazing gaming gifts over the years... and a speedy recovery to you both so I can thank you in person at a con someday soon.