Dragon+ Issue 4: More of the same? 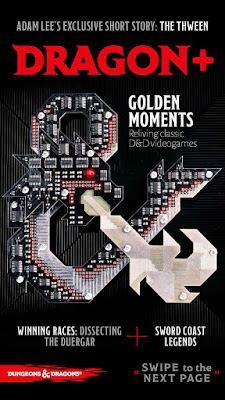 I've fallen behind in my reviews of Dragon+... Mostly because I'm not terribly excited to write about a D&D resource that is only marginally useful in my mind and largely because my life has been full of so many things other than the blog, that I've barely written any posts in the last couple months.

So, if you are not terribly interested in the review details, the question is - has it gotten any better?

In a word, mostly not. Ok, technically that's two words. But, there is the occasional highlight which might indicate that there are small improvements. In brief, there is some entertaining fiction, The Thweem, and this month also includes the DDEX3-1 Shackles of Blood adventure. The rest of the magazine is mostly "meh."


The app has been patched in recent months and it is slightly more stable, but still buggy. It's performance is pretty bad on an iPad 2, but ok on the iPhone 5. It's a shame, because I hate reading long-form content on the iPhone. You really need a tablet for an online magazine format. I still use the iPad when I can, but the finger swipe navigation often doesn't work, or lags such that you tried to swipe again before the first swipe activates, and now you've swiped past where you want to be. It makes navigation in the magazine pretty painful.

The social media aspect is still sub-optimal as well. Because they cross post article to Facebook, Tumblr and the web site, you often get the same links multiple times on the feed. Any links to the D&D web site are almost unreadable because wizards.com doesn't have mobile style sheets for the web site... and for some reason, links to the actually useful content, like Unearthed Arcana, never appear in the Dragon+ feed. Yeah... actual game content (instead of BS social media fluff) doesn't get linked in the app. WTF?!? 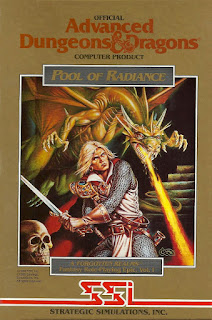 Discovering the Gold Box - Mostly nostalgic waxing from names I don't recognize. It was not exactly boring, but not exactly a gripping read either and it was mostly a advertorial set up for the fact that they are reselling these old gold box games.

Winning Races: Duergar - I often complain about their lack of tabletop content and these Winning Races articles are a great example of near misses. There is some reasonably good fluff, but in general the information in these articles is a rehash of what has been presented elsewhere, and there is no mechanical (rules crunch) data to accompany the fluff. Dragon Magazine used to have monster related article called "The Ecology of [Insert Monster]". I think the Winning Races articles could be improved with a similar style of presentation. Heck, even if they didn't change the format, they could drop in a couple example NPCs of said race to give DM's something to work with.

Travel Talk - Some light fiction to accompany graphical maps related to the Out of the Abyss stroryline. Not bad. May be a decent resource for DM's running the Out of the Abyss campaign... but I have a feeling the maps are rehashed from the OotA book itself. Since I don't have the adventure, I cannot confirm.

Cover - This month's cover, as last month, was actually a picture of a physical work of art. That's a cool idea and I can see how people would appreciate it and be interested in the process. I was kind of "meh", but I know that's more on me than anything else.

Neverwinter: Strongholds - advertorial for the Neverwinter MMO which is adding PVP guilds. 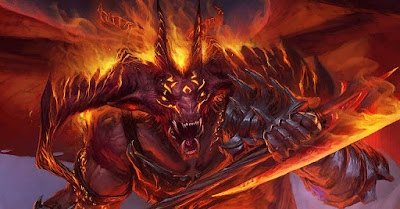 Belaphoss - Hey, look at that! D&D tabletop stats for a demon lord lieutenant. Of course, you need a 20th level party to even think about taking this dude on, so the utility is severely limited for the great majority of all home games, but I guess it's a start...

The Thweem - I enjoyed this short story by Chris Perkins and Adam Lee. I was entertained.

Dice Masters - An advertisement slash how to play tutorial for Dice Masters.

Gauntlet Gophers - As much as I'd like for it, this cartoon has yet to really interest me. D&D humor isn't easy. Even the paper Dragon magazine had a lot of comics that weren't terribly humorous. Hopefully this comic will find its feet.

Adventurer's League - One of the few consistent D&D table top resources in the magazine. Given that this section is devoted to organized play, I guess that statement masters the obvious, but at least they have been providing downloads of organized play adventures, which is a good thing in my mind.

I, personally, had an awful experience with Shackles of Blood at Gen Con 2015. After perusing the plot from the PDF, it appears it was mostly the fault of the DM (who was just terrible). The adventure itself has some flaws and is a bit rail-roady, but that's to be expected with organized play where a DM is supposed to run an adventure mostly "as-is" with a minimal amount of prep work.

At the Gen Con event, another player literally said to the DM "Look man, I just came to play some D&D and kick a little ass in combat, but this is just not fun."

You know it's bad when a player just outright says, "This is no fun."

Anyway, Shackles of Blood is a middle par adventure, but in the right hands and with some DM modification, some parts of the scenario (like the arena fight) could be a lot of fun.


So, all in all, the magazine is marginally better than the last couple issues, so it appears there is some upward trend in the content... but I still don't seem to be all that excited about it. Perhaps 2016 will show more improvement.

Posted by Raging Owlbear at 5:11 PM