How I Learned To Stop Worrying and Love the Owlbear

When I first started playing AD&D, I hated most of the iconic monsters, especially the Owlbear... and I largely blame David Sutherland.

Some of you may know that David "DCS" Sutherland (along with David Trampier) had his hands deep in the AD&D artwork within the Player's Handbook, Dungeon Master's Guide and especially the Monster Manual.

It's not the Sutherland was a bad artist -- he had some awesome work on those books. But, there were also illustrations that were decidedly... not awesome.  Next to the Beholder*, the artwork for the Owlbear was one of the worst.

* The Beholder illustration was actually not a "DCS" piece... but it was still awful.

Unbeknownst to me, the goofy owlbear look was actually a direct artistic rendering of some weird Chinese toys Gary Gygax found at some random dime store for his game.

The "Prehistoric Animals" collection contained what would later become the Owlbear, Bullette and Rust Monster. Had I know that this little random bit of D&D history shaped the early iconic monsters, I might have thought it was cool. But honestly, I thought the Owlbear was pretty stupid. I mean, it was already a bear. How does adding owl parts make it more ferocious? In my defense, I was a jaded pre-teen at the time... and the art was really bad. 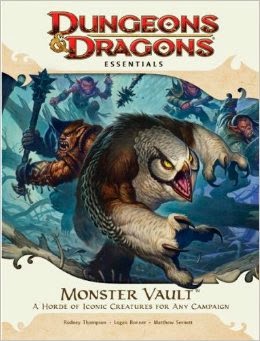 It wasn't until much later when Owlbear art improved significantly that I gave the poor creature a chance. Interestingly enough, it took 4th Edition to really cement my love of the beast. The Monster Vault stole my heart when it combined not just an owl and a bear, but snowy owl and a bear. It was like seeing Rush's Fly By Night cover... but with an Owlbear... which would have been even more awesome. Forget By-Tor and the Snow Dog. By-Tor should have fought an Owlbear.

These days, I can't get enough of the Owlbear. My players have faced Owlbears at least 4 times over the last year or so... and it ain't over yet. When I started by blog, it rapidly became clear what I should name it... and thus Raging Owlbear was born.

Posted by Raging Owlbear at 5:19 PM