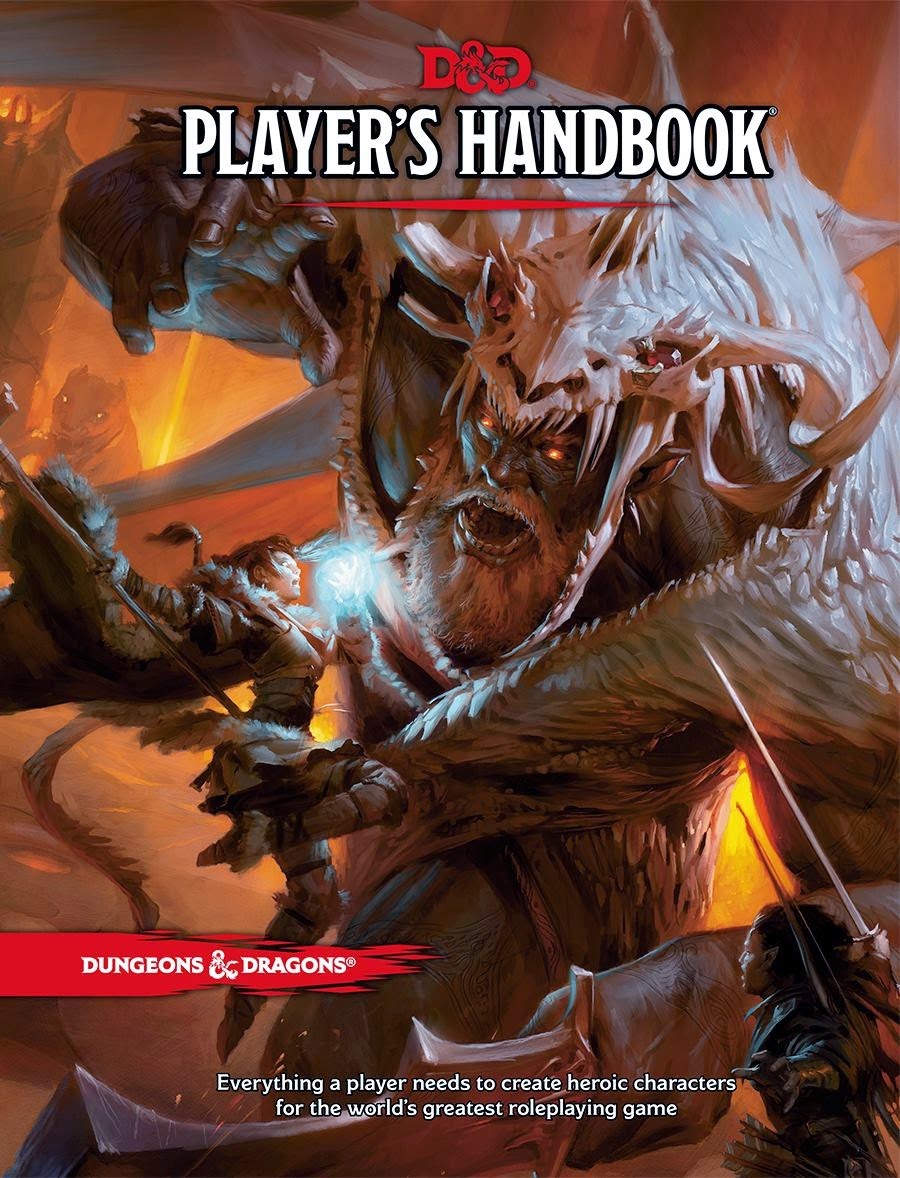 Disclaimer: This started out as a general critique of the Player’s Hanbook, but the art seems to have gotten under my skin, so this article focuses mainly on the artistic oddities in the PHB. Your mileage may vary.

In general, I’ve liked the art direction of the new edition. However, on paging through the book for the first time, there are number of foibles that really bother me. (Further disclaimer: I actually love quite a lot of pieces in the book... but it's always the stupid little stuff that annoys me to no end).


This has been revealed for some time and plnety of people, myself included, has already commented… But, I wanted to take another critical look. The art is reasonably good, but I have to conclude that its focus on the giant would appear to make it a better cover for a Monster Manual or similar book. The Player’s Handbook should put characters as the focus, and in this piece, the fire giant is the center of attention rather than the two PCs. Your eyes are inevitably drawn to the large face. One of the two PCs is barely on the cover at all.


Before I continue with the trash talk, there is a lot to like in the art in the Player’s Handbook.

Multiculturalism is much more in evidence. I like this, but it was not subtle at all. Wizards seems to be beating us over the head with “Look at how inclusive we now are!”. As I said, I like that there is much more representative artwork (and posted specifically about this about a month ago), but the execution could have been a little less ham-fisted. It feels a bit like tokenism, but perhaps I’m being overly critical.

That said, the Cleric on page 29 and Fighter on page 70 are both pretty bad ass.

The group images where there are multiple party members all traveling or fighting together are excellent. Fourth edition also did this pretty well and it's good to see that adventuring party artwork is highlighted in the new edition.

Ridiculous anime weapons are gone (mostly). There are still a few Mauls and Battleaxes that are a bit over the top, but I can reluctantly accept a little exaggeration for effect from time to time. It’s not my preference, but these things are subjective.

The Dwarf artwork is awesome. The female Dwarf Paldin (?) is tough and realistically drawn. The dark skinned Dwarf spell caster on page 247 (left) is freaking fantastic. I want to play that character. I don't know why, but that image just jumped off the page at me. I wish this trend had continued for the other races...

Interior - The Bad and Ugly


I strongly dislike the Halfling art (hate would actually not be too strong a word), and I’m not particularly happy with the Gnomes either. This makes me really disappointed because these are my two favorite races.

I understand the biggest issue with drawing a little race is that they will often look exactly like a big race if there is no other objects in the art to show perspective size. Fourth edition artwork suffered badly from this as Halflings looked no different from Humans and Gnomes were just spikey-haired Elves. To “fix” this issue, Wizards has experimented with body proportionality.

Unfortunately, the experiment has gone horribly awry. Halflings have ridiculously oversized heads and ridiculously undersized legs and feet. It’s not even cartoonish. It’s like a bad caricature… or like Sarah Jessica Parker’s head on the chihuahua in Mars Attacks! I want to hit WotC on the nose with a rolled up newspaper.  NO!  Bad Wizards!

When the Conceptopolis images were first shown in 2013, a lot of people reacted poorly and Jon Schindette (art director at the time) assured everyone that these were early concept drafts, not final versions. Except they weren’t. The Conceptopolis Halflings are exactly what we got. Ugh. I could almost live with the oversize heads if the feet weren’t utterly stupid. The Halfling Bard on page 26 (pictured above) makes me want to beat Halflings with a hakapik.


The Gnomes are not much better. The archer in the Gnome section just looks odd. The one good example of pint-sized race art is on page 176 (pictured below). It appears to be a Gnome female, but some people think she’s a Halfling. The angular face and normal feet lead me to believe she’s a Gnome, but one could argue either way. I like this representation. Her proportionality does make her seem smaller, but she has a realistic feel. This is a good example of Gnome or Halfling art.

Pathfinder gets it right, too. As much as I give Wayne Reynolds crap for this style, his Halflings and Gnome are pretty much spot-on in my book.

Seriously, what the #@*% is up with the purple people? The affliction has even spread beyond the Elves Enough with the purple-blue people already. Elves are also described as copper and bronze too.

And while we’re discussing Elves, do we really need a picture of Drizzt at the beginning of the Elf section? Since he's a Drow, he’s not even a typical PC Elf, so why is he depicted first in the section? Do we really need more Drizzt foisted upon us? The last thing we need is more dual-wielding Drow Mary Sues at the table. For Llolth’s sake, kill him already. In a fire. Slowly.


Equipment related knick-knacks appear randomly distributed on the pages in the book. While I expect this kind of thing in the Equipment chapter, it seems like a waste of space in other parts of the book where the space could have been better used for people-oriented art, instead of bits and pieces.


All told, I don’t hate all the artwork. There is actually quite a lot to like, but some of these issues bug the crap out of me and I just had to get them off my chest.