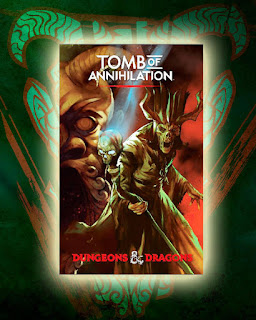 The Wizards of the Coast "Stream of Annihilation" was accompanied by a plethora of product announcements (in addition to the few that had dribbled out in prior weeks). Some of those products elicit eye raising, while others might be a bit more eye rolling. Here's my take (as if you cared... or perhaps you do, because you're reading this, right?)

First off, on the eye rolling side of things...


Yes, for the low, low price of only $10, you can get what you already download for free, but in a pretty folder! Seriously, who f@$%ing buys character sheets in this day and age?  Several weeks ago, I noted that there is a huge amount of revenue that could be had for little cost by putting out core book PDFs, and some of the WotC defenders said Wizards had "bigger fish to fry"... Yeah, apparently instead of spending time on PDFs which could net a lot of revenue, they are putting out a product that can already be had for free. Way to build new revenue, WotC!

By the way, if you are not already using MPMB's Pay What You Want character sheet (mobile link), you need to get your butt over to DMsGuild.com and donate to this author. Like, right now. This is the single best character sheet builder you can get pretty much anywhere. Not that I want to dish on Hero Lab and the like, but this guy is essentially giving away (for a voluntary donation) what others are charging $35 for. Toss a buck or two his way. Well worth it.

Xanathar’s Guide to Everything 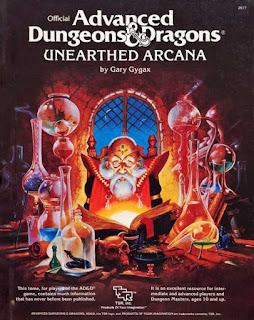 In the same way Volo's Guide to Monsters was not a Monster Manual II (it kinda was), Xanathar’s Guide to Everything is not a Player's Handbook II or Unearthed Arcana (it kinda is). Xanathar's Guide is going to take many of the UA website articles and combine them into a larger book. I am extraordinarily interested to see exactly what this book contains. I haven't bought SCAG, or VGtM (yet)... but this one is certainly on the "eye-raising" side and I'm pretty certain this will make my own must-buy list.

Hopefully, this will quell some of the bitching over 5e "not having enough character options". Back in my day, we had four damn classes (and 3 race/classes), and we were happy with that!


At first, I was a but skeptical because I've had about enough of Tomb of Horrors or other death trap dungeons. It just doesn't speak to my play style... but, the more I've read about it, the more it seems to be a spiritual successor to X1 Isle of Dread. This, I can get behind. I'm not at all interested in running this one, but I am pretty damn sure I want to play in it instead. I think I need a little gonzo in my game, and it zombie dinosaurs sounds about right. 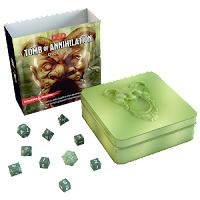 I'm a bit of a dice fiend, but have broken my habit in recent years. At first, these prompted a kind of "meh" reaction, but when I looked more closely, I actually quite like the color scheme. At $20, it's a little on the high side, but not a terrible deal for a full set of dice (assuming you want something nicer than a big bag of random dice or factory seconds). It will be interesting to find out if the Epsom salt test shows if these d20s are balanced or not. Pearlescent dice are notorious for bias because the different resin plastics can create density variations. This is generally not a problem with a single color plastic die.


I've always been a fan of DM screens even though I almost never use them in play. I feel like they are too much of a physical barrier (and sometimes a mental one) to the rest of the table, especially given than I like minis and 3D terrain so much. Despite that, I have a big collection of DM screens from AD&D (first edition) onward. 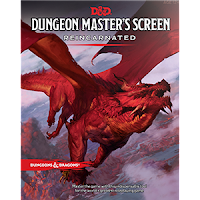 D&D 5th edition screens have been notable for their lack of utility. Other than the condition chart, the real estate on the screens published in support of the adventure paths has been wasted space. They mostly showcase artwork for whichever adventure path they correspond. With several helpful PDF DM screen layouts on the internet, the desire to purchase yet another condition chart is pretty low.

Supposedly, the new screen design is going to be better. First, it will be landscape to be lower, which I like... and it also "provides an at-a-glance reference for the most relevant and often used in-game information," according to the Wizards.com website and has been "revisited and refreshed as a direct result of feedback," but that really tells us nothing. This is very much a wait and see product, since they've had several iterations to try to get this right already. 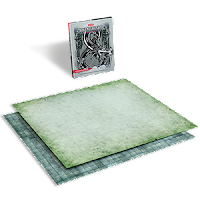 
This is essentially the competition to Pathfinder Flip-Mats... but at twice the price. For $25, you get a single double sided map, which appears to be 20" x 24" (hard to tell exactly from the images, but that would correspond to fold lines for a map that folds down to 8x10.  The Pathfinder Basic Terrain Multi-Pack offers 2 double-sided maps at 24" x 30" for the same price. I like that Wizards is getting back into the accessories business. I recommended this very thing in prior posts. It's just a shame that they can't be more competitive on price. While I like the color patterns, because of the price, I have to give this one an eye-roll as well. 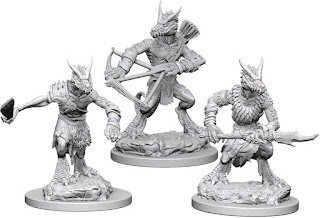 These have been out for a while now, but I hadn't talked about them on the blog. I love these. I am so sick of random miniatures and these are at an excellent price point for the Friendly Local Game Store because they can match the same price as offered online. Please go out and support your local game store by purchasing these miniatures. They are excellent. I just wish these had been available years ago when I was trying to bulk up my collection of iconic monsters like goblins, kobolds, orcs and gnolls. Now if we could just get an affordable beholder or huge dragon, that would be a major bonus.


This is another item that I am looking at with guarded anticipation. Wizards of the Coast is partnering with Goodman Games to create updated reprints of classic modules. Starting with B1 and B2, they appear to be more than just a stat block updates, and will include some rewriting as well as extra content. Many of these classic modules can be run today with community created conversions. I am hoping Goodman Games brings a little more to the table than just a stat block update given the price difference. Classic Modules Today conversions are an extraordinarily cheap way to have someone else to your conversion leg work. 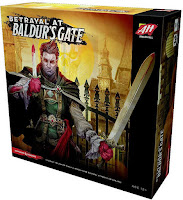 While Betrayal at the House on the Hill is not one of my all-time favorites in my game collection, I do enjoy breaking it out from time to time as a light, beer-and-pretzel traitor mechanic game. I am cautiously optimistic about this re-skin of the game. Betrayal is one of my wife's favorites, so this is likely to enter our collection at some point. I just hope they play test it better than the original or expansion. It seems there is almost always some missing text or rule clarification needed for almost every haunt. This really knocks down the overall enjoyment, especially when a misunderstanding of a haunt mechanic can alter how the haunt plays out in game. This is probably the most frustrating aspect and one of the major reasons I do not enjoy the original game more.


A lot of people online have been poo-pooing the speed at which Wizards of the Coast is bringing out new D&D product. I actually think the publishing pace has done pretty well for the game. One of the banes of prior editions has been the need for multiple splat books (and the inevitable power creep that results). So far, D&D 5th Edition has avoided this pit fall and the designers appear to be cognizant of that trap. Given the recent Unearthed Arcana articles, Xanathar’s Guide appears to be a step in the direction of providing additional PC options, without creating power-game creep of older editions.

With the addition of more non-book accessories, Wizards also appears to be strengthening their non-book revenue stream, which is a good idea... but Wizards, you really need to learn how to promote on your web site. Your products shots suck. Who doesn't offer zoom-ins or multiple angle product images in this day and age?  Seriously, offer some fracking high resolution images, for Pete's sake.