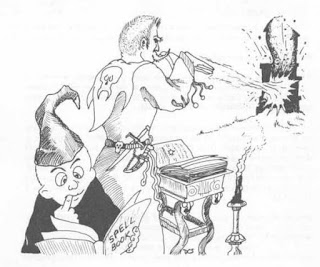 We are all terrible Game Masters, but we [mostly] don't know it. Why do I say this? Because of Dunning-Kruger effect.

The Dunning-Kruger effect basically says there is a bias in cognitive ability that prevents us from evaluating ourselves objectively. Basically, we all think we are better than we are because we may not have the skills (or the lack of bias) to judge ourselves appropriately.

This is especially true for "soft skills" where it is harder to judge success or failure in a given task. If I am a terrible juggler, I know I am bad as soon as I can't make it past the first few seconds of fumbling objects before they come crashing to the ground. If I am bad at telling anecdotes at cocktail parties, my friends are likely too polite to tell me I'm a shite story teller. So I may never know. If I am a terrible leader, I may still believe I am a godsend, even if the press and a majority of my constituents are believe I can't count to 21 without taking off my pants.That is Dunning-Kruger in action. Out incompetence masks the ability to recognize our incompetence.

So what is a thoughtful Game Master to do?

Confucius said, “Real knowledge is to know the extent of one’s ignorance.” Socrates was also famously quoted as saying , "The only true wisdom is in knowing you know nothing," which makes one wonder if he had somehow heard of Eastern philosophy.

As a Game Master, your best bet is to assume you are bad at it. Only through that lens of reality will you aspire to be better. If your initial reaction to reading the first sentence of the post was "I know I'm a good GM because my players don't complain," then it is highly likely you may actually need help.

If you are satisfied with your level of skill at game mastering, then you should probably give it up. Good game masters are never satisfied. They do not believe they have somehow reached some level of expertise. They are always striving to improve their game.


A good game master also seeks critique from their players. This is an especially hard one, because no one wants to hurt the feelings of the guy or gal running the show. Players want to keep playing each week, even if there are some weak spots in the game master's skills. Better to play in a mediocre game than no game at all, right?

Also, even if the GM is pretty good, a player might be hesitant to share critique because they are a friend and just don't want to cause friction at the table. A "So, how'd it go tonight?" question is going to generally elicit positive responses, because nobody wants to be "that guy" or the "Debbie Downer" when most of the game is fairly solid.

To enable player critique, it is better to seek it out through survey questions:

1) How much NPC role playing do you want in the game?
(a) More (b) Less (c) Just Right
2) Is there enough combat? Yes / No
3) What suggestions do you have to make combat more exciting?
4) What suggestions do you have to make NPCs more memorable?
5) Rank your preference from 1 to 10 of these game touchstones:
(a) dungeon logic puzzles (b) trap finding (c) long multi-session story arcs (d) short story arcs contained to just a few sessions (e) dungeon crawls (f) NPC interactions, etc.

...Or something along those lines. You could use an online survey tool, or ask them to jot down some suggestions on paper.

You can also ask leading questions. Something like: "I thought that [this scene description] went a little slower than it should have, but I didn't want to give away the mystery... Were you all bored, or was it OK that there was a bit more role playing or exposition than usual?"

If you direct their critiques, you are likely to come up with better feedback than a overly broad "How are things going?" question.


If you think you are a bad GM, don't worry too much about it (just worry a little bit). The fact that you think you aren't that good means you are on the right road and likely trying to think of ways to be better. Keep reading advice, both ideas with which you agree, and especially ideas with which you strongly disagree, because even in disagreement, you might learn something. Keep an open mind. Keep thinking about your game between sessions. Keep trying new things at the table to see how the players respond. Keep trying to solicit feedback. Keep trying to ensure your players are having fun... but don't forget you are supposed to have fun too!

Posted by Raging Owlbear at 2:07 PM