I have a bit of a love-hate relationship with magic items. As a DM, I’ve always wanted magic items to be a rare and cherished item in a character’s inventory. The challenge is that, as characters level up, that +1 Longsword becomes less useful and will be discarded for the next powerful “plus” that comes along, no matter how fancy a name you might give it.

Because I do not want to have to churn new magic items through the party every few levels (supposed to be rare, right?), I’ve had to come up with ways to keep existing items in the player’s inventory fresh. In this regard, I’ve stolen come up with ideas to improve magic weapon: Enchantment (rune/gem) Slots and Legacy Weapons. 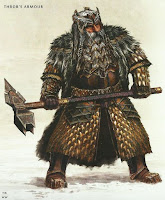 Enchantment slots is an idea modified from the Diablo series of video games. In those, you can upgrade some magic weapons or armor by permanently fusing a limited number of gems to the item. Depending upon the gem, you may add different powers or damage types to the weapon. Because I am running Storm King’s Thunder, I am using the Giant runes in a similar way as suggested in the book. However, Giant runes aren’t the only avenue for upgrading the power of a weapon or other item. Other enchantments can be laid upon the item if the PCs do the required research. This may involve rune magic, alchemical treatments, gem enhancements, or other rituals.

During the 3rd edition, Wizards of the Coast published the Weapons of Legacy book. In this book, they posed an alternative where weapons (or other magic items) might start out with a basic power, but also unlock new powers as the characters advance and discover lore-related rituals. They introduced the concept of attuning to a weapon, and added other layers (weapon feats) which could be gained through various complex means.

In my own D&D 5e game, I was not looking to introduce something quite as complex, so I came up with a few ideas. An item might have a code phrase or ritual to unlock additional power(s) only discoverable through research or lore-based divination. Alternatively, an item might grow along with the power of the wielder. As an example, a lower level Paladin might receive a +1 Holy Sword, which does 1d6 extra to undead. As he levels, it gains +2 and 2d6 at 7th level and by 11th level (or thereabouts), it’s a full blown Holy Avenger. Its power unlocks might also be triggered sooner by destroying powerful undead, or extra-planar beings.

Just about any rare or wondrous item could be re-skinned to start out as a simple low-level magic item. You can drop hints that there is something special about the item when they attune or identify it, without necessarily giving away the whole mystery. Be sure to name the item and create a small backstory to pique that extra interest from the player.


If you’d like to add a little more richness to the lore of your magic items, or at least make them seem like less of a disposable resource, consider adding ways to level them up for your players. Imagine if the likes of Wave, Whelm, or Black Razor were disguised as a "normal" magic weapon prior to revealing their true natures. This could also be true for cursed weapons, which may not reveal their set-backs during the initial attunement. Now every magic item found by the party may be cause for both wonder and concern.
Posted by Raging Owlbear at 4:50 PM