This will be my last Origins.

This year was no different… and actually even worse than usual.

You see, this year in order to make sure I was ready for event registration day, I attempted to login to my account prior to event registration. For whatever reason, my password was not working. I was not terribly surprised, as I have a whole bunch of different passwords in order to minimize any attack on my identity. After trying several different times, I just decided to just use the “Forgot Password” option.

Days pass. I email again the morning of registration. I asked if they could change it manually. “It will be fixed prior to registration opening,” I was told again. “We can’t change the password. We will let you know as soon as it is fixed.”

My wife and I were screwed. I had registered us both for the weekend pass, but could not access either account because of the password issues and thousands were about to flood the queue. 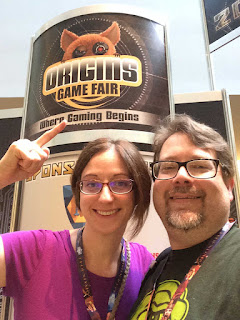 There was, however, a small breakthrough for us. We had two other family members that were going to attend, but doing events that were not the same as ours… So we asked if we could register our events under their itinerary  in order to hold the spots. Thankfully, they were totally cool with that.
So, on Wednesday, event registration opens and the site fails dramatically. No one can login without getting timeouts. No one can search events without all kinds of Java site errors or 503 Service Unavailable errors. The website was crashing so often, NHTSA said they were going to open an investigation.

Over the course of 3+ hours, my wife and I managed to get enough page loads between us to get into about 10 events… Or about 3 successful event registrations per hour.

Origins then announces on Twitter and Facebook that they will close registration until Friday at 1 PM to get the issues fixed… but then they secretly re-opened registration on Thursday without telling anyone they had told to wait until Friday. So, basically, if you listened to them, you were screwed out of events you might have wanted because other people kept trying anyway and found that registration has been re-opened earlier than announced (and the password issue was still not fixed).

The password issue was eventually fixed over the weekend, four days after event registration was initially opened (and after almost everything was completely booked). I was extremely lucky that I had family that could grab the slots my wife and I wanted to play. I’m certain many others did not have that opportunity.

They never emailed to let me know the password recovery had been fixed, despite telling me repeatedly they would. No notification. No apology.

S#!t technology… Even s#!ttier communication. For a 15,000+ attendee event, this is the worst event management I’ve ever seen. They apparently don’t even test the most basic functions of the website -- login, password recovery, and event registration -- which is basically everything you need to have a convention website. 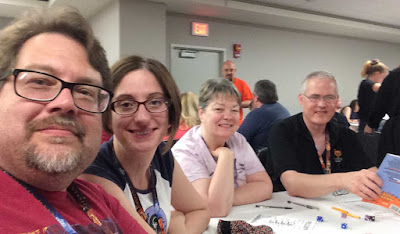 I have been a major proponent of Origins on this blog and among my gaming friends, but there are other smaller cons that are growing each year with better customer experience -- Gamehole Con, BGG Con, Dice Tower Con, PAX East, and now PAX Unplugged. Origins may be the #2 spot in terms of size at the moment, but if it keeps offering crap customer experience, it will find itself less relevant as time goes on. It certainly will be for me as my family and I  will be seeking other alternatives and recommending others do the same. If they can't fix their management issues, they do not deserve our money.
Posted by Raging Owlbear at 10:59 AM