Mega Dungeons: Under Mountain or Under Enthused?

Warning: This post will probably annoy a lot of people. If you are one of those people, know that before you read this, I am not saying your stlye of play is wrong. I am posting this to express why this style of play does not suit me.  If you are having fun in the Under Mountain or other sprawling labyrinth, more power to you! But it's not for me. If you disagree, we can chat, but please keep comments civil.

Everything old is new again. Old school D&D play style has seen a resurgence in recent years. Along with the rise of OSR systems, Wizards of the Coast has also steered the new edition of Dungeons & Dragons back in the direction of AD&D first and second editions. With this resurgence of interest in the old games, the old modules and dungeon crawls have also seen their Renaissance.

Sprawling maps with dozens and dozens, if not hundreds, of encounter areas. Room after room of strange demonic temples, mad alchemist laboratories, vermin infested caverns and even the occasional Mimic in the form of a kitchen sink. Sounds cool?  Well, not so much for me for one key reason:

My response is "I like my fantasy to have the appearance (or at least veneer) of reality." There is always a suspension of disbelief at the fantastic, but there needs to be some internally consistent logic and Mega Dungeons break that logic in so many ways that it kills the versimilitude of the game world. They don't even pretend to make sense.

1) Why was it built? What was its purpose?

Encounter locations should have a reason for existence - a former life or history.  "A wizard did it" only works once or twice before you roll your eyes and sigh. Why would one build a Mall of America (or larger) sized labyrinth underground? Unless you are in a post-apocalyptic setting and you are delving the actual Mall of America, it doesn't make a lot of sense.

2) Who are all these people things living here and why?

Mega Dungeons are the world's largest condo associations, apparently. There are creatures of all shapes, sizes and colors all living in fairly close proximity... Yet they pretty much just wait around for an uncouth group of murder hobos to break into their homes and slaughter them for their  few meager coppers. Thinking or acting in a logical manner must be against HOA policies.

3) What the hell are they eating?

You've put every major apex predator in the Monster Manual in a bunch of rooms all closely packed together. That condo board better wield a whole lot of power. Everyone would be trying to eat everyone else, or fighting heavily and constantly over that tiny mushroom patch down the hall on the left. Unless they've opened a Walmart in your underground mall, there are few places where these folks can get simple necessities like food and water. Limited resources contested by multiple groups generally results in all out warfare.


4) Where are they pooping?

Remember Katrina? Remember the Super Dome? You really don't want to... and this would be much worse.

5) What about structural engineering?

Take a bunch of bed rock and hollow out huge swaths of it above and below as well as spread out along the four compass points. You know what you have in the next few years? Faerun's biggest freakin' sink hole.

And here is the key point. Why are we even here? What else is there to do?  You move from room to room kicking in the doors and slaughtering the hapless creatures in their homes... a hundred times over. A small dungeon crawl from time to time can be a kick. But several months to a year of game sessions slogging through room after room with little to no point to it all? I now know what the monsters eat -- PC's who have committed suicide from boredom. I'd rather collect a thousand sun-scale feathers in Southern Barrens.


Ok, so this next version of the map is pretty cool from a cartography perspective. I do like isometric renders. If there is something you do like about Mega Dungeons, I want to hear about it in the comments. 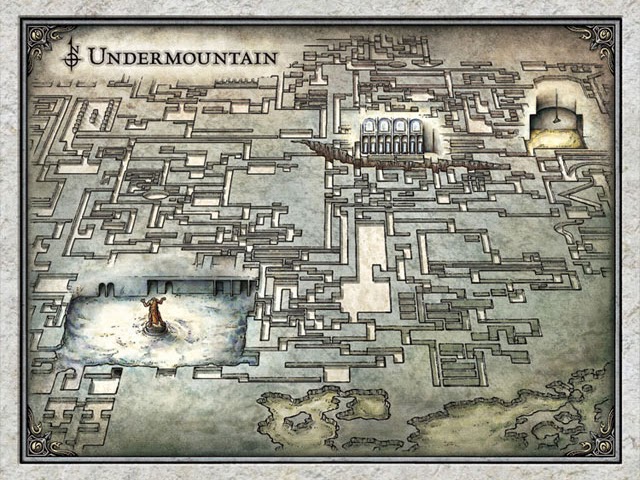