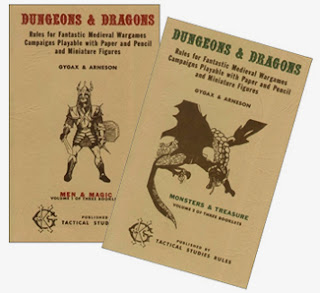 I was pretty young at the time, but I knew my brother Steve and his friends were on to something compelling. There were maps on blue lined graph paper and interesting looking toy soldiers that the guys were painting in their spare time.

One day I saw by brother looking over this large map that appeared to be some kind of mansion. There was something about that map. It was this huge sepia tone parchment paper map. I immediately connected to it.   I later learned it was Tegel Manor, but I'm getting ahead of myself.

What are you doing?

"I'm looking at a map for the game we play."

How do you play it?

Looking slightly annoyed, but with the potential for amusement, he tells me, "You are hero  that explores dungeons and old ruins for fortune and glory. Here... for example, You are standing in the foyer of a vast, eerie mansion. There are doors to the left and right and a hallway ahead. Pick one."

"This room is about 20' by 30' in size. There is a lot of old broken furniture and shelves with rotted tomes. There is a chest on the North wall in this room. What do you do?"

"No, really... You are supposed to be a brave hero who explores and collects treasure."

"You are pricked by a poison need trap in the lock. You die."

[Getting mad] I told you I wanted to run away and you said I shouldn't!

"You were supposed to check the chest for traps. I can't help it if you die because you weren't careful..."

Most of the actual conversation is a little blurry looking back. But my brother did kill me in the very first room I explored with a poisoned needle trap. I probably left the living room and told mom that Steve killed me with trapped chest. I was only about 8 at the time after all. No doubt mom scolded him to play nice with his little brother... But I never really did play D&D with him and his friend (except for this one other time, but that's a different story).

Oddly enough, that didn't completely turn me away from D&D. When Steve wasn't around, I studied that map of Tegel Manor. All those rooms. The towers. This thing was so cool.

A few months later, my good friend Martin Griffin came over to my house because he had a cool new game he wanted to play. He had a book with a group of people gathered around a large statue. A couple of them appeared to be prying a monstrously large gem out of the eye socket.

"I made you a character. His name is Ajax."

Like the kitchen cleaner?   My knowledge of Greek mythology was not that deep yet.

"No, he was a great and famous warrior." It took a bit of talking, but he convinced me not the change the name.

I don't recall many details from those early days when it was just me and Martin, but I was hooked as sure as if he'd given me heroine... He had given me "Hero".

We eventually roped a few of our other friends in. Mike, Billy, Phillip... We had sleep overs and would game into the wee hours of the morning, way to late for pre-teen. We'd watch Thundarr religiously. We played D&D, Gamma World, Traveller, Twilight: 2000... It was at least 10 years later before I ever heard the term "LARP", but we were hitting each other with foam wrapped wood poles in the woods outside Phillip's family farm in the early 80's. It was almost 30 years later when I heard of the words "gonzo play style" which apparently means design a dungeon like a 12 year old would, because that seems to be what we were playing back in 1982.

These were our very first adventures... and I give a hearty thanks to Gygax and Arneson for their works... But also, I owe a major debt of gratitude to Martin Griffin for introducing me (in a real way) to that game that makes us feel like Heroes.

Have a fun anecdote of your early days playing? Share it in the comments.

Posted by Raging Owlbear at 9:36 AM