Over the last week or so I've taken some time to plot out what would be included in 1st Adventures from a design and development perspective.

When utilizing the d20 SRD as a starting point for a game design, a lot of the heavy lifting is already has already been done by default. But to get back to a simpler OSR-style game, you then have to take a critical eye at just what will and will not be included. This is actually harder than it sounds at first, because the SRD really does include a large array of mechanics. Decisions about one mechanic may impact others in unanticipated ways (especially around combat math).

The heavy lifting is disguised in trying to figure out what to cut. When you look at the SRD as a whole, there are pages and pages to review and the task seems almost overwhelming. So I took a step back to try to find the most simple view of what I wanted in an OSR game.

So, what did I want for my OSR game?

Then I had to sit down and actually start pulling out the bits I wanted for the game. Because the SRD is such a monster, I decided to start with something simple -- Weapons and Armor.

(Note: I've also given plenty of thought to classes and combat, but I'm not yet ready to write about those.)

The d20 armor table includes a lot of options, but I also wanted to look back at what AD&D offered to see where the game differed over the years. Interestingly enough, the answer was "not much". So then I had to decide, do I want to offer the players options for every step in AC? At first I thought I'd only have 4 or 5 armor type. Some games offer only a few different armors to keep things simple, but as I started looking at the armor tables, I decided to allow GMs some flexibility for different (fantasy) historical settings (like Feudal Japan, Roman Era, etc) so I left most of the armor types in. Below is the current armor table. 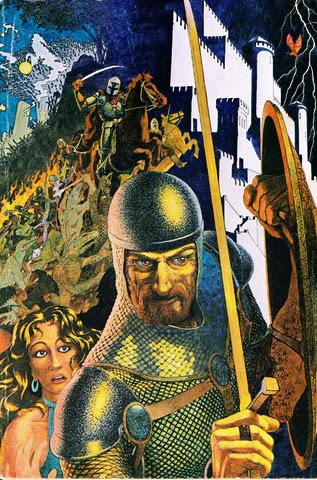 I'm considering adding a step to differentiate Brigadine (AC 14) and Scale Mail (potentially AC 15), but that would push the rest one step higher with Plate Armor ending up at AC 18.

Looking at weapons, I wanted to keep the weapons list relatively simple. The various incarnations of D&D have had a number of changes over the years from the "all weapons do 1d6" style to an array of damage types and amounts from a d4 to a d12. I wanted weapons to be more of a "flavor" mechanic for PCs rather than a choice forced by combat optimization. For my game, I wanted to limit the range of damage types to d4, d6 and d8, but I didn't entirely succeed. 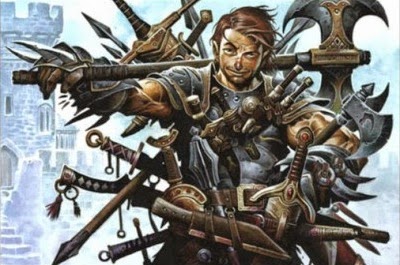 Most of the weapons were fairly easy to categorize based upon historic rule sets. Daggers, clubs and the like would be deal d4 damage . Short swords, maces and similar medium hafted weapons would do d6 damage. Long sword, war hammer and longer hafted weapons would do d8. I was then left with two-handed weapons. The only option to make them feel different from a long sword would be to give them d10. I considered d8+1, but that didn't seem to be different enough. A d10 was a better compromise for simplicity than something like d8+2.

As a result of this, I realize the d12 is becoming more obsolete as I shape the mechanics of the new rules. This bothers me because I really like the d12. I know if seems silly, but I feel like I need a reason for the d12 to exist in my game. Because of this, I stumbled across what I thought is a great idea, which brings me to...

I wanted to include critical hits in my game, but was unsure how I would handle them. I've read some opinions that critical hits are not necessary because if a PC hits with a normal AC attack and rolls maximum damage, that is a critical by definition. No need to add an extra chance for a crit; the damage die already accounts for it. I have to admit I am enamored of that simple philosophy. If it takes a 16+ to hit a creature on a d20, why should a full 20% of those hits be critical? [More on that in a minute...]

But, sometimes rolling a 20 is special. Even though it has the same 5% probability of any other number on the icosahedron, rolling a 20 on the die is exciting and should be special in some way. So I've kept critical hits and it has given me a use for the d12.

All critical hits add 1d12 to the max damage by weapon type. Crit with a dagger? 4 + 1d12. Longsword crit? 8 + 1d12. Great Axe critical? 10 + 1d12. You automatically get the maximum damage for your weapon type, and the d12 represents the critical damage because of the hit to a vulnerable or vital area. I think this makes a nice bonus for critical hits and keeps the d12 with an important role in the game.

So, what about the situation where you need a 17 - 20 in order to hit the opponent in the first place (and therefore you would crit 25% of the time for any hit)? Well, I've decided that in order to truly get a critical in my game, not only do you need to roll a natural 20, but you also need to exceed the target number by 10 (after all the combat bonuses are included). Rolling a 20 alone won't do it. Exceeding the number by 10 alone won't do it. You need to do both.

I think this adds an appropriate amount of excitement to the game and also means you will only critically hit creatures that have an armor class low enough that their vitals would be more vulnerable, or that you have enough magic buffs to overcome a high armor class. Critically hitting a dragon will be exceptionally hard (assuming I get the other combat math correct).

Let me know what you think in the comments.
Posted by Raging Owlbear at 5:09 PM