There was a lot of good feedback from my last post on spell interrupts from ... Enough so that I thought it was worth writing a follow-up article. 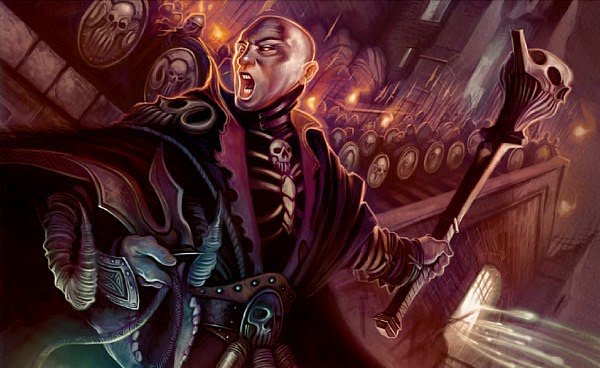 Please read the previous article to get the proper context for this follow up... Don't worry. I'll wait.

Getting back to my earlier example:

Ranger Rick: I'd like to Ready an action. I'm going to aim at the guy in robes, but wait until it appears he is casting a spell. Then I will shoot my bow.

DM: <Perception roll> The robed man notices you are aiming at him and ducks behind the altar (heavy cover). If you take the shot, you will be at Disadvantage. It sounds like he is casting.


I this scenario, you give the spell caster an opportunity to notice others aiming (whether it is a PC or NPC). I might even give the PC an automatic success on spotting the aiming foe assuming there isn't a ton of other distractions or large crowds.

On interrupting a fighter -- my assumption is that +Wing Kearns asks because it may seem like I'm picking on the Wizard. In the right circumstance, a melee attack may also be interrupted.

Ranger Rick: We need to protect Wizard Bob while he closes the portal. I will take a Ready action to intercept and attempt to trip (DEX contest) any foe who head in his direction to attack.

This is a reasonable use of the Ready action to prevent a melee attack (the trip itself doesn't stop the attack, but the foe will need to spend extra movement and may not arrive at the target). As a DM, I would rule that the tripped foe can't use large weapons to attack from prone (long swords, great sword, battle axes, etc..), but shorter weapons like daggers and short sword would get Disadvantage.

Does this make the Ready action too powerful?

Not necessarily. Keep in mind that the trigger must happen or the PC loses her action. It's also not a guaranteed success as you have to hit and the target must miss their CON save. If the PCs use this tactic, it is certainly acceptable that their foes would as well. Allowing the foe to react to the aimed shot also makes this less powerful of an option. In addition, the Readied action uses up the reaction, which also means that PC would not be able to make an opportunity action, or other reaction not related to the Readied action. This balances the potential abuse of high initiative, especially given that the trigger must occur in order to take the reaction.

As I noted in the comments on the prior post, I would not punish a newbie player playing a spell caster by constantly trying to interrupt their actions, but I would not  rule out ever using the tactic in key circumstances. On the same token, experienced players should expect to be challenged, both in their use of offensive tactics, as well as in defense of their own casters.

To me, using this kind of interrupt is a way of bringing back the old school way of disrupting spell casters while keeping within the spirit of the 5e rule set and only allowing the opportunity in very specific circumstances.