Back in May, I took the D&D Starter Set to task for its contents (or lack thereof). Now, that I actually have one in my stubby little owlbear paws, I wanted to revisit some of those critiques and add some observations when I actually have it in hand. This is not a full review, but really some thoughts that came from my own unboxing reactions. 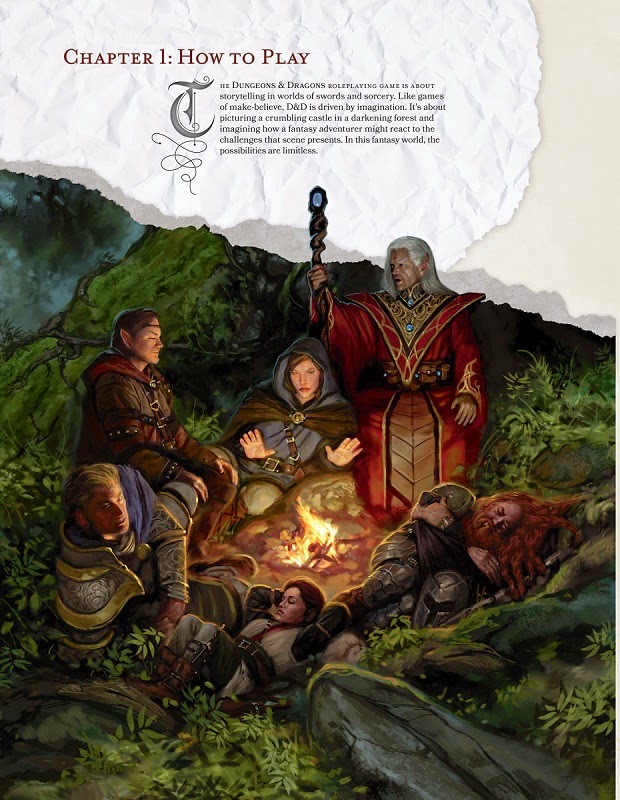 
That's it. On the surface, the $20 list price seems pretty good, but when you examine what you are really getting, it seems less of a deal. For the Amazon discount at roughly $13, this set is worth the price of admission, which is a real shame because the local game store loses out on the perceived value in the Starter Set.

In my last article, I compared it to the Pathfinder Beginner Box, which has a higher retail MSRP of $35, but even at that price, the perceived value is pretty high because the Beginner Box has a lot of nice extras aside from the rule books. So, let me start by examining what the D&D Starter Set gets us.

The books in the starter set are nicely organized and laid out. The text is legible to my eye. The full page art pieces are a real pleasure. They show adventuring parties doing what adventurers do. They try to illustrate the "three pillars" - Exploration, Combat and Social Interaction - and they do a pretty good job. The small fill art, such as in the equipment section, is "meh". It's not particularly exciting, but it doesn't detract too much either. It would have been better to do a still-life style illustration of the equipment instead of randomly arranged individual art bits that are disconnected from one another.

The paper quality is slightly thicker than magazine stock, but without a cover. This is a bit of a disappointment. In contrast, the Pathfinder Beginner Box uses a binding like those which are found on the adventure path modules. The covers are a thicker card stock with magazine-like interior pages. If the Starter Set rule book sees a lot of use at the table (which is likely), I can imagine this falling apart fairly quickly if you and your players are not overly gentle. I would prefer a more durable rule book. The adventure book does not need as durable a cover since it will see less use, but a cardstock cover would have been nice for that as well.

My wife, who is not a new gamer, had this very complaint (unprompted from me) because there were certain sections where she had a difficult time finding the right rules section when making a new character using the Basic rules PDF. The Pathfinder pre-generated character sheets also use this layout to better explain to the new player their skill and combat options. The Starter Set fails to take this kind of hand-holding into consideration for new RPG players.

There's a lot of detail on a character sheet. There needs to be something to help explain it all for the newbies, especially the ones who are not going to read the rules cover to cover before sitting down to play. Honestly, very few players will do that. They want to jump right into the game and learn as they go. I've taught several nephews and nieces, so I know how this goes. They never read the rules first so a learn-as-you-play model is extremely important. Not only does the Pathfinder character sheet follow this philosophy, the Beginner Box rule books are also very friendly to the new gamer with step-by-step explanations for most mechanics. The D&D Starter set is only fair in that respect.

Additionally, the Pathfinder Beginner Box spends a large portion of its rule book page count on advice for the new DM, like what to do when putting together a campaign after the starter adventure is finished. Again, the Pathfinder content excels in helping out the new DM and players where the D&D Starter Set includes very little of this kind of first-timer help. Veteran players won't care about this, but this is a major omission when marketing a introductory product to new gamers.

The adventure booklet comes with some extra monster stats to give the DM a little more to play around with for continuing adventures, but at 27 monsters (a few of which are actually NPCs), the number of creatures included is pretty small, even if only to keep us going until the Monster Manual release. It kind of stinks, actually. The Pathfinder Beginner Box included stats for over 40 creatures. It was an excellent variety to keep the new players going even after they conquer the included adventure. We won't get any new monsters until they are included in the Basic D&D PDF after the Monster Manual release. Lame. If we finish the box set in about 5 sessions, we have to wait at least a whole month before we get new creature content.

UPDATE: Since 2014, the D&D Basic PDF includes a lot more options and monsters, so this critique is less relevant today than it was back in 2014.

I was concerned about not including character generation before they announced the Basic D&D PDF, but with the PDF released now, I don't hold this against the D&D Starter Set. It was a strategic decision to keep the page count down and the price low, and I have no problem with that.

There are no maps. I think this is a real shame. I understand that people are going to shout "Theater of the Mind!", but that's a cop out. The D&D Starter Set and Basic D&D both contain references to playing on the grid. It would be simple enough to include a nice poster map and note that it is not necessary for play. Wizards of the Coast has said it would support both play styles. By leaving out any maps, it is telling players who like the grid that the Starter Set does not support their preferred play style. 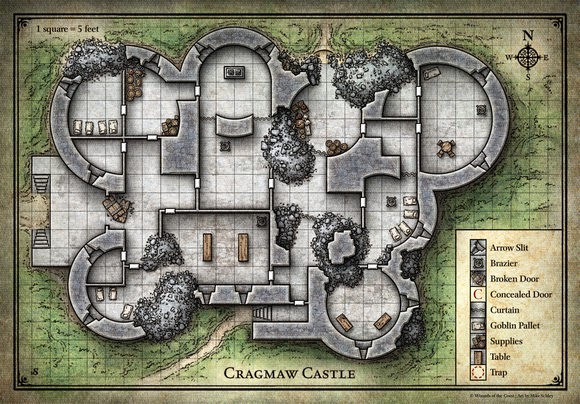 Even if they could not include all the encounter locations due to cost, a double-sided poster map of Cragmaw and Thundertree would have been awesome. Not only are they excellent locations, the maps themselves have replay value for other adventures.

It is also a shame because the maps are beautiful. +Mike Schley sells the full scale digital maps on his site, but this is not noted anywhere in the set, or on the Wizards site. I only know because I'm plugged into the D&D blog community. Wizards of the Coast used to offer these kinds of map downloads for D&D Insider subscribers, but apparently that is also no longer included in a DDI subscription. They keep stripping more and more away from their paying customers. 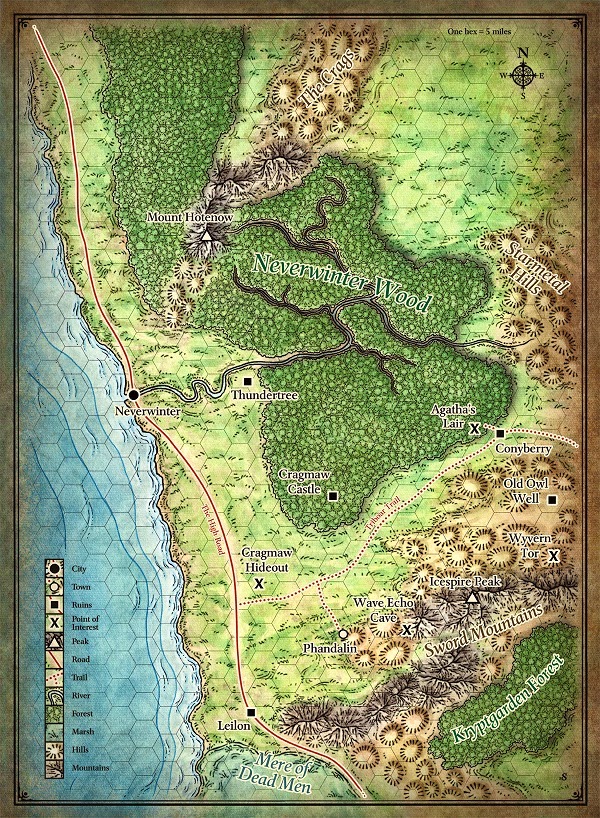 The other reason it is a shame is that beautiful maps provide inspiration. When I opened up my World of Greyhawk Gazetteer in the early 80's, I cared only slightly for the included booklets. It was the maps -- those wonderful gigantic maps of the Flanesse and surrounding kingdoms and regions -- that fired the imagination.

Even if you are a theater of the mind advocate, why not include the region maps of the village and surrounding Sword Coast on a double-sided 8"x11" sheet? That would have been better than the lame 1-sided character sheet and advertisement.

I truly believe leaving out any maps has nothing to do with Theater of the Mind and everything to do with Wizards of the Pocketbook. A poster map might have cost them 10 cents per unit sold and that kind of revenue loss upsets the bean counters. Unfortunately, it also makes the set a lot less awesome.

This text content itself is well done and the adventure is getting good reviews online. (I'm trying not to read it because it may be run by someone else in my group). However, the lack of hand-holding for the truly new players (to which this is supposedly marketed) hurts the presentation.

The biggest problem with the D&D Starter Set is that it feels thin. At $20, it may get a number of impulse buyer in the retail channel. At $13 on Amazon, it's already a best seller. No doubt by Hasbro standards, it will be a successful product launch... and they pinched every penny out of it that they could. That is the real shame. For a tiny bit less revenue per unit, they could have had an awesome box set. Instead, it merits about a C+ because even with an excellent adventure, the rest of the box really lacks substance.

I really wanted to like the Starter Set a lot, and from what I hear, the adventure is excellent... but it misses the mark too widely on teaching the game to completely new players.

UPDATE: Based on the quality of the adventure, this grade has since been updated to a B+. At the Amazon price, this set is a must-buy.